A Tribute to Edgerrin James

Share All sharing options for: A Tribute to Edgerrin James

Edgerrin James is a Hall of Fame running back.

There. I said it.

Don't believe me? OK, before you call me names and say I'm biased for all past, present, and future Colts greats, look at the numbers.

He is currently ranked #11 all-time on the career rushing list. Very soon, he will pass Marcus Allen for #10 all-time. Marcus Allen is in the Hall of Fame, and it took him 15 seasons to rush for 12,243 yards. Edgerrin James has rushed for 12,164 yards in 11 seasons.

By the time this 2009 season is over, it is very likely that Edgerrin James will pass Marshall Faulk, Jim Brown, and Tony Dorsett, ranking him 7th overall. In the top ten rushers of all time, currently only three backs (Curtis Martin, ranked #4; Jerome Bettis, ranked #5; Faulk, ranked #9) are not in the Hall of Fame. Faulk is Hall of Fame eilligible in 2011, Martin in 2012, and Bettis in 2013. All are locks to get in on the first ballot. If not, well then sorry, but the Hall of Fame would become a sham and not reflect what it was intended to honor: True football greatness.

Factoring all that information in, and it is pretty much a lock that Edgerrin James will have his bust enshrined in Canton. Not bad for for a kid who grew up in modest Immokalee, Florida.

In the lead-up to this Sunday's game between the Seahawks and the Colts, we are seeing many articles about the "Return of Edgerrin James" to Indianapolis, and rightly so. Edgerrin James is one of the greatest running backs this league has ever seen. But more than that, Edgerrin James will always be a Colt, and we Colts fans will always treat him as one of our own.

The best of the "Return of Edge" articles comes, not surprisingly, from Mike Chappell, who profiles Edgerrin, the family man. Since the tragic death of Edgerrin's longtime girlfriend, Andia Denise Wilson (mother to his four children), the man they call "Edge" has made it a point to adopt one of the key principles often emphasized by Edge's former coach in Indianapolis, Tony Dungy: Family first, then football.

Edge's family live some 3,000 miles away from his home stadium in Seattle, but as Mike Chappell makes clear, Edge does not let mileage interfere with his primary job as a dad:

"I'm on the phone with them nonstop," James said during a phone interview from Seattle ahead of Sunday's visit to Lucas Oil Stadium to face his former team. "We have a sweet setup at the house. I know they're well taken care of.

The article goes on to quote current Colts running backs coach Gene Huey, who was Edge's position coach from 1999-2005.

"He follows the beat of his own drum, which is a good beat.

"He's done it the right way, on and off the field."

Edge's accomplishments as a player and as a father rank him as one of the true "great" players we have in this league. I'll admit that for us bloggers, it is hard to accept "good people" at face value, mainly because we spend so much time making fun of the Randy Moss-like players this league has often placed front and center. As fans, we focus on highlight plays, loud behavior, and and the celebration of idol worship. For all the claims that Terrell Owens is an individual, or that Chad Ochocinco (Johnson) is unique, both of them have the personalities of slugs when compared to Edgerrin James.

Edge is the ultimate individual in this league, and unlike many, many other players, he does not crave the attention many of these fools go out of their way to get.

There is nothing special or unique about attention-grabbing douchebags like Owens and Ochocinco. Dime a dozen, any street corner. Edgerrin James is the kind of person and player everyone in the league should look up to. There are not many like him.

Isn't that the very definition of "unique." 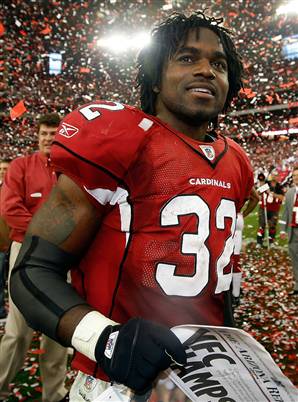 Often forgotten when discussing Edge is his before-mentioned selflessness. John Oehser offers a peak into Edge, the mentor. Following the 2005 season, the Colts chose not to re-sign Edgerrin James. He went on to sign with the Arizona Cardinals, one in a series of moves that transformed the perennial losing franchise into a contender. The story was one of the first stories I ever blogged about here (yep, I'm old now, thank you for reminding me).

Edgerrin was replaced in Indy by a rookie first round pick in 2006: Joseph Addai. Unlike former-Colts running back Marshall Faulk, a brooding malcontent who seemed to resent the Colts for trading him in 1999 and replacing him with a then-rookie first rounder named Edgerrin James, one of the best mentors Addai had while he transitioned from college life to the pros was the man he replaced: Edge.

One reason for the [Colts'] affectionate attitude toward James was the class and honesty with with James carried himself off the field, and it was that side of James Addai said he saw shortly upon being selected by the Colts in the first round of the 2006 NFL Draft.

This was a little more than two months following James' departure, and Addai said James immediately took a mentoring role on the field and off.

"That speaks a lot about him," Addai said. "I still talk to him to this day. Having somebody like him who had been doing it well -- that means a lot."

Addai said he and James talked multiple times after he was drafted, then the two spent time together the following February as the Colts prepared to play the Chicago Bears in Super Bowl XLI in James' native South Florida.

"Joe, if you're going to make a decision, run it across me first."

Edge's mentoring of players who would one day replace him did not stop with Addai. Around the middle part of last season, Cardinals coach Ken Whisenhunt benched Edgerrin James in favor of rookie running back Tim Hightower. Following the promotion, Hightower rushed for 109 yards on 22 attempts, including a 30 yard TD run, in a victory over the St. Louis Rams. After the game, Hightower took the game ball, attached a personal note to it, and presented it to Edgerrin James.

Why did Hightower do this for a man he just replaced?

"He deserves it," Hightower said. "He's done so much for me."

Despite being benched, Edge did not sulk or brood on the sidelines, creating a distraction that undermined the team, like Joe Montana often did with the 49ers and Steve Young, or Terrell Owens has done with every team he has played for. Instead, Edge took Hightower under his wing, taught him how to run better with the ball, protecting his body and the football from bone-jarring hits. More importantly, when asked by reporters about Hightower replacing him, Edge did what Edge always does; he spoke the truth about Hightower's abilities:

"I'm happy for Tim. I'm supportive of Tim. I knew he was going to have a big day. But this was personal." 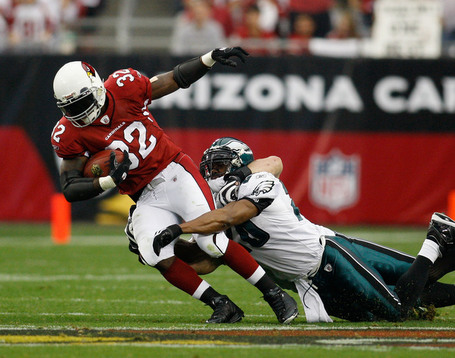 Image: abritishman.files.wordpress.com
Later on in the 2008 season, Whisenhunt changed his mind again after several poor performances by the team. He sat Hightower and once again started Edgerrin James. The result was a memorable push through the 2008 post-season, culminating in an appearance in Super Bowl 43. Edgerrin James was the starting running back for the Cardinals in that game. In the first half, James' running and receiving helped keep Cardinal drives alive... until Kurt Warner threw a game-killing INT on the goal-line prior to halftime.

Following the Super Bowl, it seemed obvious Edgerrin wanted out of Arizona. Despite getting benched, tutoring Hightower, getting un-benched, and helping lead the Cardinals to the Super Bowl, the front office felt Edge wasn't worth keeping around. Yet, despite everyone and their mother knowing that the Cardinals did not want Edge, they held onto him until after the 2009 NFL Draft. All throughout this process, Edge was dealing with Andia's illness, which took her life nine days before the Cardinals finally released him.

Way to keep it classy, Cardinals.

Arizona drafted Edge's replacement, another first round pick: Beanie Wells out of Ohio State. However, unlike Addai or Hightower, Wells does not seem to be benefiting from his status as Edge's replacement. Wells has rushed for only 73 yards in three game, and has fumbled the ball twice.

Now, Edge has signed with the Seahawks, and following Indy's 31-10 smashing of the Cardinals last Sunday night, he took the time to text his old friend Reggie Wayne about the game:

This Sunday, Edge will return to his second home. He won't be in the friendly confines of the old RCA Dome. That building is gone, along with the blue face guards that once adorned Colts helmets the year Edge was drafted. Also gone is Tony Dungy, his friend and life mentor. But, Peyton Manning is still there. So is Reggie, Dwight Freeney, Gene Huey, Jeff Saturday, and Ryan Diem. Some players, like Freddy Keiaho, Donald Brown, and Pierre Garcon, have near played on the Colts with Edge. That's how long he has been gone. But while the new stadium may seem foreign to Edge, the people in the stands will most certainly look familiar. And while written tributes and profiles like this are nice, the best gratitude any Colts fan can give ole Edge is this:

When Edge gets the ball, we should cheer for him.

Obviously, we don't want our team to lose. But, rarely (if ever) does the opposing team's player get cheered when he performs on the field. This Sunday, we should change that. 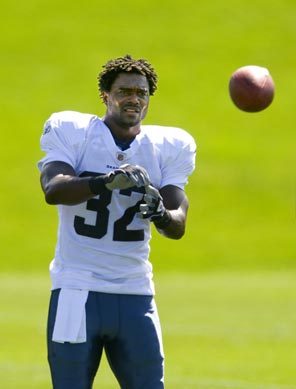 This Sunday, cheer for this man please

This Sunday... hell, any Sunday... it is a-okay to cheer for the Hall off Fame lock that is Edgerrin James, no matter what uniform he wears.