Share All sharing options for: Know Your Colts History: Fear the Ç

This week, a Colts legend makes his return to a city where he became a legend and a fan favorite.

That's right, Justin Forsett is back in Indianapolis.  I'm sure he'll receive a rousing ovation from the many fans who appreciated his three games of service last season.

All kidding aside, it will be nice to see Edgerrin James back in Indianapolis this weekend, even though he's playing for the enemy team.  It never stops getting weird seeing a legendary player in a different uniform, but every legend deserves to end their career on their own terms.  That's why I still want to see someone sign Marvin Harrison, even though I can't see him in anything other than the blue and white.  (Sign with Duke, Marvin!  No one will know you're 37!)

Then again, this image is probably going to ruin my dreams (and retinas) for the rest of my life, so maybe its best that Marvin stays out of football. 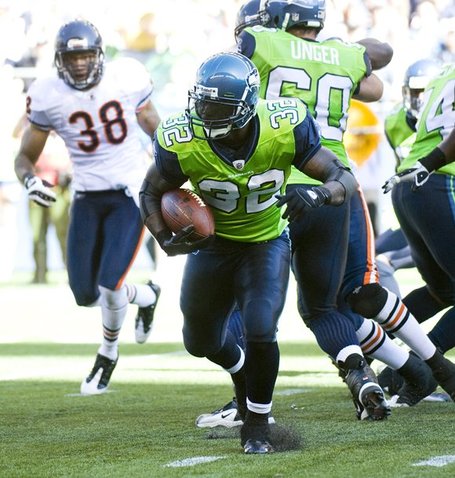 After the jump, we'll talk about another funny looking outfit belonging to a guy with a funny-looking name.

[Note: My screencapper wigged out this weekend, so you'll have to deal with my back-up plan of writing about Pierre Garçon.  Hopefully I can figure out what's wrong and get it going again next week.] 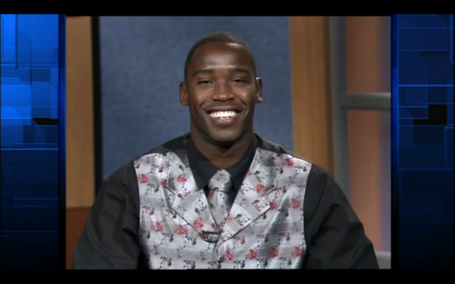 In the wake of Marvin Harrison's release and Anthony Gonzalez's injury, someone needed to step up at the wide receiver spot.  Based on the preseason, most of us had Austin Collie pegged as that guy.  Instead, the second year man out of Mount Union has been the guy that's made the leap this year and become someone that Peyton Manning can rely on as the #2 receiver with Gonzalez out.

No, he hasn't done enough for any of us to wonder if he could take Gonzalez's spot as the 2nd wide receiver, but he's done enough to make Colts fans ecstatic about the receiving situation.  Let's review just how good we have it right now: There's Reggie Wayne, who seems to find new ways to assert his dominance each week.  Other than Larry Fitzgerald and maybe Andre Johnson, I don't think there's another receiver in the NFL that can match Wayne's production or replicate his spectacular grabs, which seem to get more dazzling with each passing week.  Even though Anthony Gonzalez is out, we all know what he's capable of doing when healthy.  There's always Dallas Clark who you could argue is the true 2nd receiving option, even though he's not officially a wide receiver.  Joseph Addai and Donald Brown have both made big plays in the passing game and having Austin Collie as the 4th best receiver is an embarrassment of riches.

Every receiver has a role in this offense, but Pierre has the chance to make this squad special.  We all know what kind of levels the Colts can reach as an offense with three explosive receivers.  When Gonzalez comes back, we'll have a team that shapes up a lot like that 2004 crew.  Reggie Wayne is at the height of his dominance, just like Marvin Harrison was four years ago.  On the other side, there will be Anthony Gonzalez, a young receiver that can take pressure off the #1 guy to do everything, just like Wayne did for Harrison.  And of course, there's the 3rd receiver who gives opposing defenses too much to cover.  Garçon isn't quite at Stokley's 2004 level yet (Dallas Clark can help with that, though), but he gives the Colts dimensions in the passing game that they didn't have before.

Pierre gives the Colts their most physical receiving threat since Aaron Moorehead.  And unlike Moorehead, Garçon gives the Colts the added benefit of actually being able to catch the ball.  His vicious dislodging of Dominique Rodgers-Cromartie's head should tell you all you need to know about that.  How many other receivers do you know with an offensive face mask penalty to their credit?  Don't let the name fool you, Pierre is as tough as they come.

What makes Garçon's physicality unique is that he can couple it with speed.  We've seen in the last two weeks how he can burn defenders in a flat-out footrace.

And we've seen how he can use his speed to slice through a defense:

He has a great physical makeup, but there's a lot to like about his mental makeup as well.  He's not afraid to ask for the ball and he's not afraid to mix it up with whoever is covering him.  It's a bit of a change from Harrison, Wayne and Clark, who have more of a silent swagger to their game, but that's not a bad thing.  Sometimes you need a player to come along and bring a different attitude to a team, without becoming a sore thumb, and Garçon has done that this year.  He still needs some work on his fashion choices, but even the best receiver make some odd fashion decisions now and then.