As I watched the game last week, I couldn't help but notice how many times the producers cut away to the crowd during the Colts' 34-17 win.  After almost every play with a positive impact, even if it was only a 3 yard gain, it seemed like the producers wanted to show how passionate this fan base gets and how much they appreciate the Colts' efforts on a week-to-week basis.  I'm proud to say I'm a part of Colts Country, as I'm sure the rest of you are.  You just don't see this kind of passion anywhere else:

After the jump, we'll take a look at another week of dominance from Peyton Manning and the power of pink. 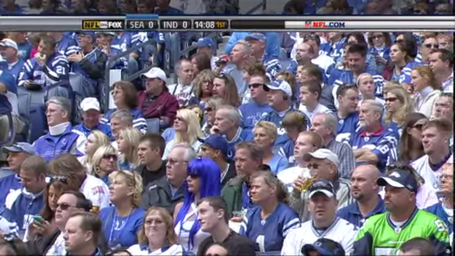 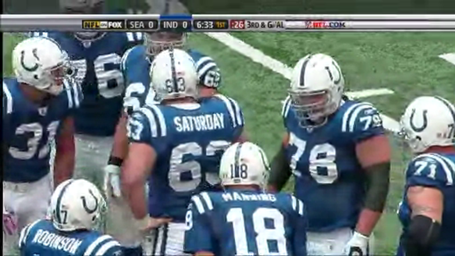 Jeff turned his back on Peyton after throwing the ball near the redzone. 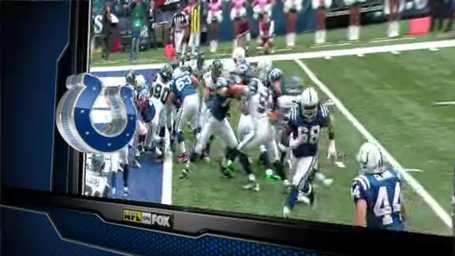 Unsure of who to block, Eric Foster sets his sights on Dallas Clark. 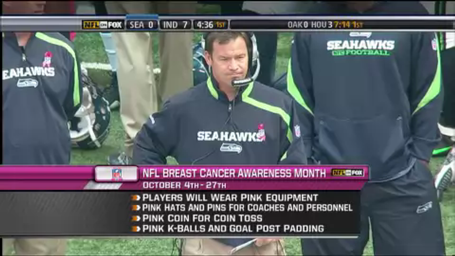 - Peyton is changing all of his audibles to involve the work pink.
- Kyle DeVan will wear a pink jockstrap.
- Jim Mora Jr. will hold his breath until he's pink in the face.
- Donald Brown will change his name to Donald Pink. 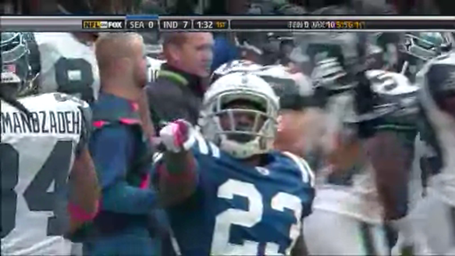 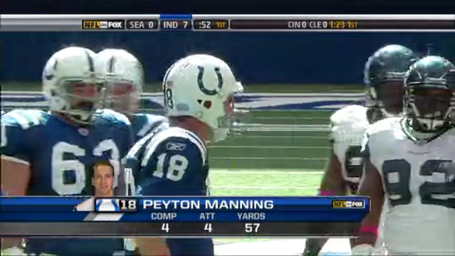 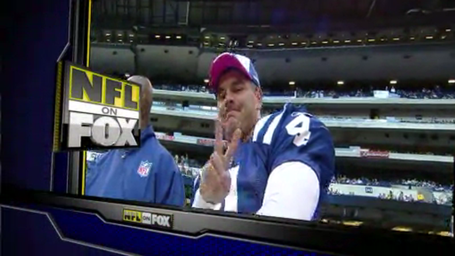 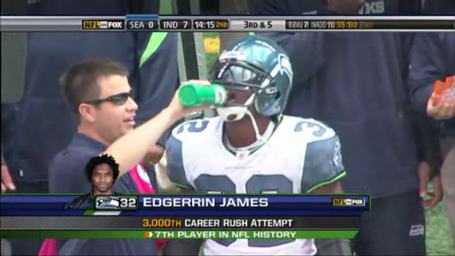 Edgerrin James is a great runner, but he wouldn't be anywhere without his water boy. 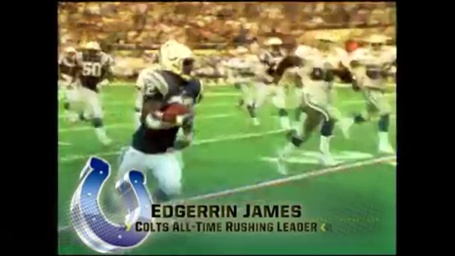 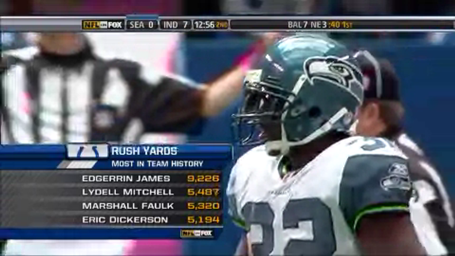 Raise your hand if you knew who Lydell Mitchell was before Sunday. 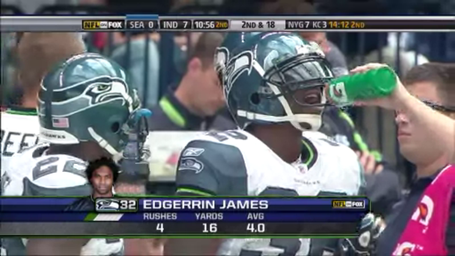 Seriously, Edgerrin wouldn't be half the player he is without his water boy. 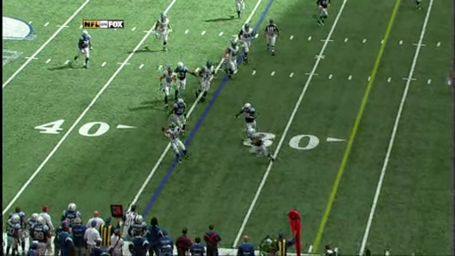 Throwing the ball ahead of that blue line is a biiiiiiiig no-no, Seneca. 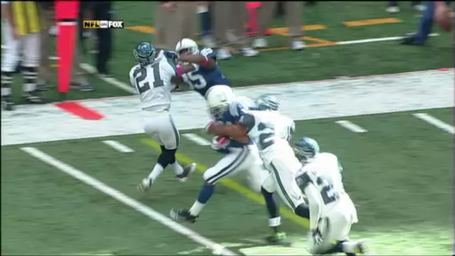 Did I ever mention that I LOVE Pierre Garcon's run blocking? 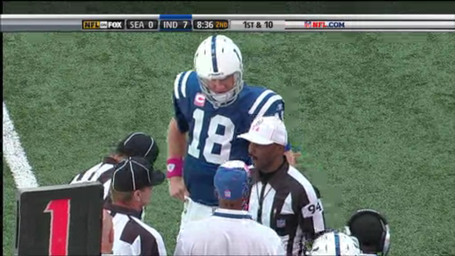 "Hey guys, I just wanted to remind you that I'm about 3 feet taller than all of you refs, so let's go easy on those holding calls today.  Thanks!" 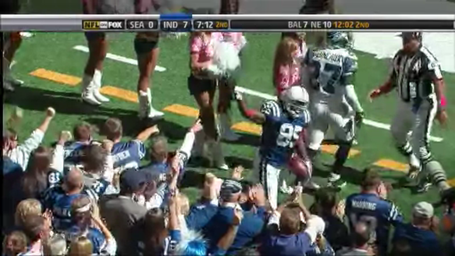 Everything was going fine until Pierre realized the crowd was pointing at him because they were doing the Hokey Pokey in his direction. 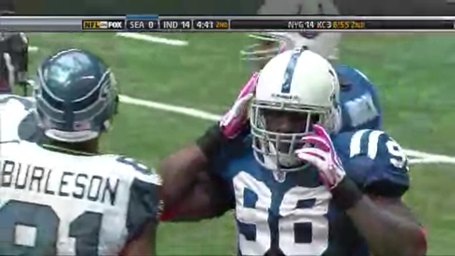 Robert Mathis has to adjust his facemask after every play to make sure he resists the temptation to eat the quarterback. 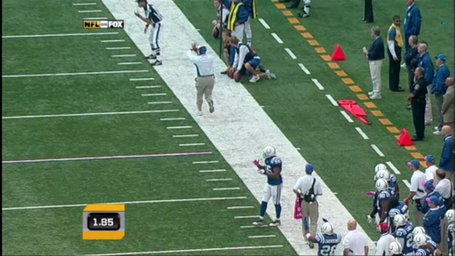 Laugh all you want about Jim Caldwell's speed, but I'm pretty sure he'd smoke most of us in a footrace. 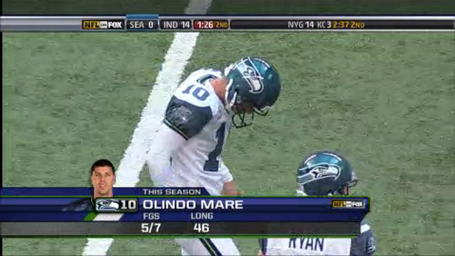 I was conflicted when Olindo lined up for this field goal attempt.  On one hand, I wanted to see him make it after the debacle last week.  Then again, it would have been very touching to see a Mora go on a rant after a Colts game.  Sadly he made the field goal before I could think of what Jim Mora would have said if he missed. 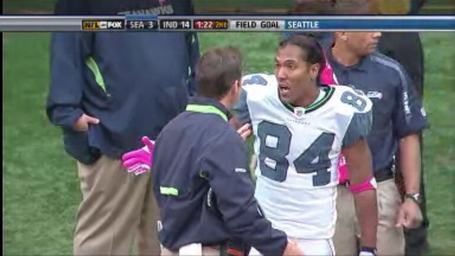 "Hey, you didn't tell me Edgerrin's water boy was just for Edgerrin.  I just wanted something to drink!" 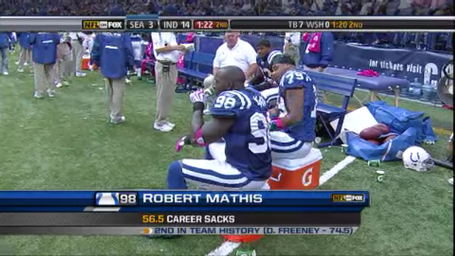 Robert's reward for this accomplishment?  A mini-cooler that doubles as a seat. 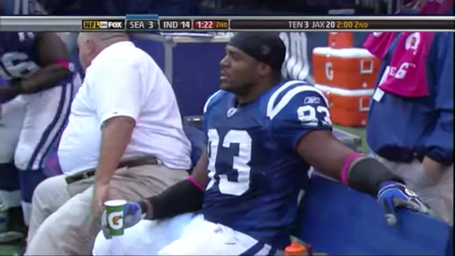 "I wonder if that gold digger still has my number..." 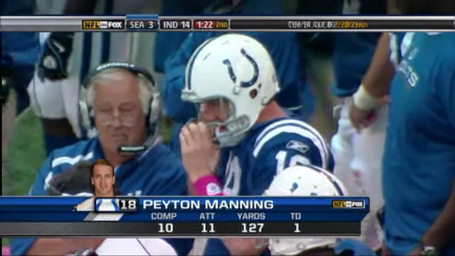 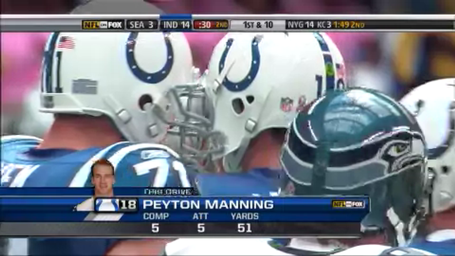 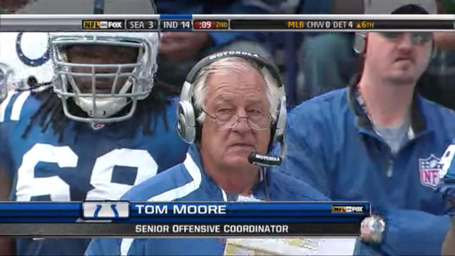 It's not like anyone would've thought Tom Moore was the Junior Offensive Coordinator, but still. 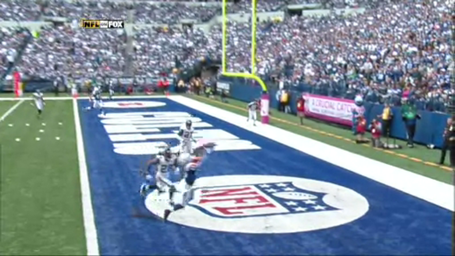 Might as well get that first NFL touchdown in spectacular fashion. 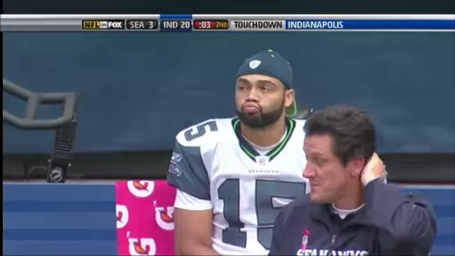 Sign #1 that your team is going to lose: Your quarterback is making the blowfish face. 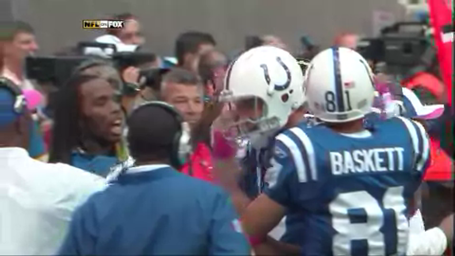 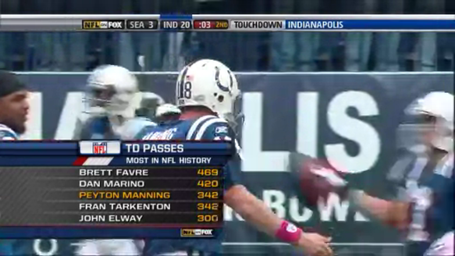 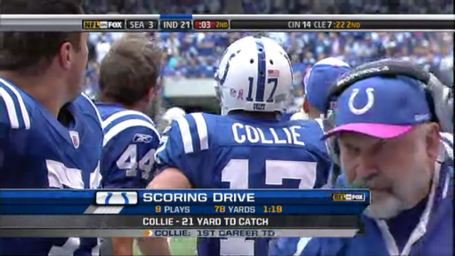 To celebrate the Colts win, Pat McAfee busted out his Carlton Dance.