Fans and media have grown accustomed to seeing the 2009 Indianapolis Colts blowing out teams left and right on route to a 6-0 start, winning 15 straight regular season games (dating back to last season). Against the San Francisco 49ers, we were promised some "real" competition.

And the game did not disappoint.

The 49ers jumped out to an early 7-0 lead, the result of a 64 yard Frank Gore TD in the first quarter. The Colts struggled to respond on offense, scoring only field goals rather than touchdowns when their team was in the redzone. And because we are all so very, very SPOILED this year, with offense exploding out of nearly every game the Colts have played, there were many Colts fans who spent halftime wringing their hands, wondering if the Colts were as good as advertised. Some fans were ready to "jump off the ledge" after Alex Smith drove the 49ers offense 89 yards in 1:11, capping the drive with an 8 yard TD pass to Vernon Davis with roughly 30 seconds left in the half.

However, at the end of the TD, Davis was flagged for excessive celebration, and 15 yards was tacked onto the end of Indy's kick return. In 25 seconds, Peyton Manning drove the Colts to the 49ers' 13 yard line. Matt Stover then kicked a FG to cut the lead 14-9.

From that point on, the Colts shutout and shutdown the 49ers, and exposed SF's coach Mike Singletary for the petty, immature bum he really is.

The 49ers did not score a single point in the second half. Their running game was stuffed and their passing game smothered. Frank Gore ran for 91 yards on 13 carries. That's 7 yards a carry. But, this is one time where the stats really lie to you. 64 of those 91 yards came on one play, which featured normally sure tacklers Jerraud Powers and Antoine Bethea attempting to "hit" Gore rather than "tackle" him. After that play, the Colts held Gore to 9 carries for 20 yards. To put it mildly, Gore got lucky on his 64 yard run. The rest of the game, he was stuffed. The Colt then turned their pass rushers loose on Alex Smith, who was decent on one series and terrible throughout much of the game.

In a nutshell, this was a game that really showcased the Colts defense, who helped make up for the lack of cohesiveness from the offense. Again, these are the new Colts. These Colts don't just play defense.

They dominate with it.

Let me first say the obvious one more time: Mike Singletary is a bum. I said it in my quick recap. I say it again. BUM. For all his silly talk of "playing tough" and being "tough minded," this schmuck is nothing more than a poser. In the third quarter with the Colts driving to gain the lead, Indy started gaining success by running a hurry-up offense. From the booth, Colts radio announcers Bob Lamey and Will Wolford noted that 49ers players were receiving signals from 49ers coaches to "go down" and "fake an injury" in order to stall the Colts offense. This was a tactic used by Bill Belichick and the New England Patriots years ago, and it was dusted off and used liberally by Mike Singletary and his cadre of puppets on the sideline. The tactic designed to stop the game, rest the defense, and disrupt the Colts offense all while not sacrificing a time out.

In other words, it's cheating. 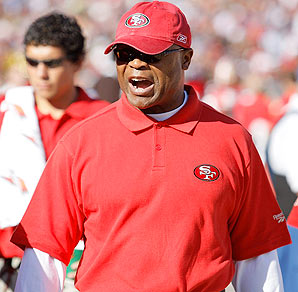 The strategy didn't work, as Indy scored the go-ahead TD on a 22 yard pass from Joseph Addai to Reggie Wayne to start the fourth quarter. Yes, I did type that correctly. On first and 10 from the SF 22, Addai ran left and threw to a wide open Wayne in the endzone. The score gave Indy the lead for the first time in the game, and they would hold on to win.

Later on in the game, with the Colts driving in the fourth quarter, looking to run out clock or (possibly) pad the lead and ice the contest, they went hurry-up again. The 49ers countered with signals from the sideline, and down went Takeo Spikes. Spikes complained of "cramps." He was helped off the field by training staff after a significant delay. A few plays later, Spikes was back out on the field, making tackles and seemingly a-okay.

Despite the cheating, the Colts drove the length of the field, converted a fourth and inches deep in 49ers territory, and ran out the clock. Ball game. Colts win.

For all of Singletary's bravado, all his speeches and all his pants dropping antics to motivate grown men who make millions of dollars playing a game, Singletary is nothing more than a coward. When you have to resort to cheap tactics in order to win, you are not "tough." You are not a "winner." You are a "cheater." And for all of Singletary's shenanigans, for all his last minute defensive adjustments, for all of his tricks... his team surrendered 410 yards of offense and lost the game. They are now 3-4 and have lost three in a row. Nice work, Mike. Keep it up, ya bum! 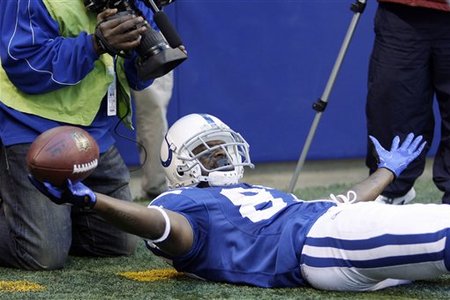 Switching gears from the fake head coach to the real won, for the first time since the NFL merger, a rookie head coach has started 7-0. That coach is Jim Caldwell. And unlike Singletary, Caldwell did not have to resort to cheating in order to extend Indy's regular season winning streak to 16 games. He didn't even need a TD pass from Peyton Manning. What he needed was some outstanding defense, some excellent special teams play, and a little flare from Tom Moore, who made a brilliant play call on the Addai to Wayne TDs. Here are some more observations:

Many thanks to Fooch and the 49ers fans at Niners Nation. While I'm sure some of them will not take kindly to me calling their coach a bum, I'll just say that Singletary is not good enough for the storied franchise that is the 49ers or their great fans. They deserve a classy coach. Not a cheating punk.

Back to the game, for me personally, I think these kinds of games are important. The 49ers are not a bad football team. Even though their coach is a laughable faker, they have a good defense and some solid pieces to build on with their offense. So, for the Colts to overcome their offense's problems and win the game shows me something. It should also show YOU something, and to the people complaining at halftime that the Colts "should be winning," shame on you. This is the NFL. Nothing is guaranteed. Anyone can beat anyone, any given Sunday. One week you're great. The next, you suck. The key is not getting caught up in the hype or the hate.

And you should too. Go Colts!