Billed as the best game of the regular season, the thrilling come-from-behind win by the Indianapolis Colts, who were down 31-14 at one point in the second half, lived up to its expectations. This game had the feel and intensity of a playoff game. Hell, it had the intensity of an AFC Championship Game. Hats off to the Patriots for playing a great game, and to the community at Pats Pulpit, for blogging and commenting during the game.

We in the blogging community labeled this game The War of 1812, and both #18 (Peyton Manning) and #12 (Tom Brady) certainly came to battle. 702 combined passing yards for 7 TDs and three turnovers (one for Brady, two for Manning) for the QBs, who completed 66% of their combined passes.

All the respect in the world to Drew Brees, but there is a reason 18 and 12 are the best in football. Last night showed you the reason.

In the end, the game came down to some clutch play by both Peyton Manning and the Colts defense. There was also a rather arrogant, silly coaching decision made by someone we all know and loath; a decision that likely cost the Patriots the game. I am, of course, referring to Bill Belichick's erroneous decision to pull his punt team on 4th and 2 from his own 28 yard line and go for it with nearly 2:00 minutes left in the game.

But bigger than Belichick's decision was the clutch play of the Colts. Big media (aka ESPN, or ESPNBoston, whichever label you prefer) will hem and haw about how the Patriots "dominated" the game, and that the reason they lost it was because of Belichick's near-moronic decision.

The Patriots were dominant in the first half of the game, scoring 24 points while using a game plan that attacked Indy's injury-riddled secondary. But, as we Colts fans know all to well, it is not how you start. It's how you finish. In the fourth quarter, the Patriots disintegrated like wet tissue paper right in front of our eyes. The Colts outscored them 21-10 in the fourth, striking with TDs on two very quick drives. Also in the fourth quarter, with a 31-14 lead, the Patriots ran the ball only 6 times for 16 yards (2.6 a carry). And on the offensive drive following Joseph Addai's TD to cut the Patriots lead to 6, the vaunted Pats offense stalled after Jerraud Powers nearly (and likely should have) picked off Tom Brady's sideline pass and returned it for a TD.

It was after that third down play that Belichick opted to go for it, and the Patriots did not convert.

So, while mindless drones debate Belichick's silly decision to go for it on 4th and 2, the real reason the Patriots lost the game is because they folded in the fourth quarter. It's as simple as that. Imagine if the tables were turned and the Colts had lost the game in the exact same fashion the Patriots did. The talking heads would not be yacking about 4th down coaching decisions. They'd be talking about how "clutch" the Patriots are. How their quarterback "finishes" ballgames. How they "rise to the occasion" when they face adversity.

I'm not reading any of "OMG! The Colts are so amazing!" stories this morning, and that's unfortunate. If that story is good for the Patriots in victory, it should be for the Colts. Indy has proven for ten years they are the equal to the Patriots. Since 2005, the Colts have a 5-1 record over their rivals, and they have won those games mostly by coming back to beat the Patriots in the fourth quarter. Yet, despite yet another resilient performance by a Colts team that simply refuses to quit, even when some of their "fans" were leaving Lucas Oil Stadium 10:00 minutes into the fourth quarter (side note: If those were season tickets holders, their tickets should be revoked; no "fan" leaves a Colts game with 10 minutes left), I'm not seeing a national media scene lauding the "clutchness" of our beloved team. Hell, even Indy's local columnist thought they had no chance to win, and knowing him he probably had is story written up and spell checked by the end of the third quarter, sitting back in his press box chair with a smug told-you-so look on his face.

And that, my friends, is why blogs like this one exist. After the jump, we start breaking it down the best game of 2009 thus far. 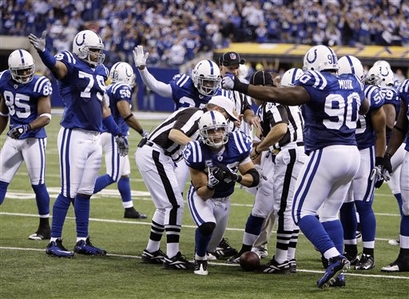 Melvin Bullitt (33) stops the Patriots Kevin Faulk on fourth down

Before we begin, let's dispel any notion that the Patriots were "robbed" of this game by forces outside their control.

Our podcast was prophetic.

For much of the first half, Tom Brady and Randy Moss took a ruler to the rear end of Indy's pass defense. Moss finished the night with 9 catches for 179 yards and 2 TDs. They were also running the ball effectively, with Colts killer Kevin Faulk leading the way with 79 yards rushing. Much of the Pats success had to do with moving Moss around in different formations, utilizing him in the slot, or using motion to have him drive right at Antoine Bethea, who Moss burned for a 63 yard TD in the second quarter. 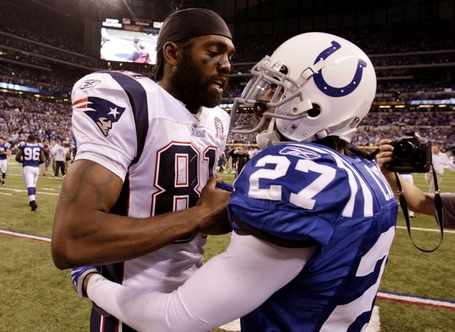 Brady went through much of the first half untouched by the Colts pass rush, with rookie Sebastian Vollmer and his double-teaming friends focusing a lot of attention on Indy's Dwight Freeney. Despite a brilliant first half by Peyton Manning, who threw 2 TDs to keep the game close, the Pats looked like world beaters entering halftime up 24-14.

The second half told a much different story than the first.

The third quarter started with Indy stopping the Pats in the endzone on an Antoine Bethea INT. Brady was staring down Randy Moss in the endzone, and Bethea read his eyes all the way for an INT. The Colts did not capitalize on the Brady mistake because of a costly Manning INT on the following drive, which looked like a wounded duck when it left Peyton's hand bound for the eventual arms of the Patriots' Lee Bodden. But, despite the setback, the Colts were undeterred by the Patriots offense, which drove the field again only to turn the football back over to the Colts again on a goal line fumble by Laurence Maroney. However, even with another gift from the Pats, the Colts still couldn't score.

The fourth quarter began with the Patriots seemingly sealing the "win" with a 5 yard TD pass from Brady to Moss. At that point, the score was 31-14, and with the Colts offense stalling it's very likely Bob Kravitz already had his story for Monday morning emailed to his editors. However, the Colts responded to the Pats TD with one of their own, hooking up on a 29 yard TD strike from Manning to Pierre Garcon. The drive took less than 2 minutes. The Colts scored a TD on another two minute drive in the fourth; Joseph Addai capping the drive with a 4 yard TD run.

It was after this drive that the Colts defense shut down the Patriots offense, stopping them on fourth down with Bullitt's excellent tackle of Kevin Faulk. The Colts then burned out the clock as they marched 28 yards, winning the game on a one yar TD pass from Manning to Reggie Wayne.

So, for all the praise everyone is heaping on Brady and Moss for "dominating" the first half, the real dominant players were Manning and Reggie Wayne, who caught 10 balls for 126 yards and 2 TDs, including the game-winner. In the fourth quarter, and especially on the game-winning drive, Reggie Wayne was money. Absolute money. Contrast this with Moss, who caught only one pass for 8 yards in the fourth, and when the Patriots needed to convert 3rd and 4th down, Brady did not go to his "dominant" wide receiver. He threw it to Wes Welker and Kevin Faulk.

So, say whatever you want about Randy Moss, but Reggie Wayne is a better wide receiver than him. I will defiantly shout that from any mountain top, and unlike the Moss backers I have actual games to back up my claim. Maybe Wayne doesn't have Moss's skill, his speed, or his playmaking ability. What Reggie does have is guts, grit, and an ability to rise to the occasion when the chips are down. We have never seen that, EVER, from Randy Moss, who puts up gaudy numbers but often folds in the clutch?

Gee, where have we heard that line before? 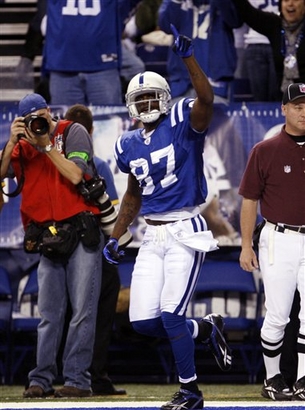 Also notably absent from the fourth quarter, and really from the entire game, were great young players Jerod Mayo (5 tackles, 1 sack) and Brandon Meriweather (1 tackle). Mayo's name was not called at all in quarter four, and on the Addai TD run he was blocked out of the play by the interior of Indy's o-line. Meriweather, on the other hand, might as well have not suited up. One tackle. ONE! Contrast this with Antoine Bethea and Melvin Bullitt, who played amazing football in the second half after getting toasted in the first. I think Mayo is a stud and Meriweather has some great ability, but these two guys did not bring it during the money time.

Despite their fourth quarter meltdown, the Patriots do deserve a lot of props. They are a damn fine football team. These two teams were so evenly matched that the game literally came down to one yard. And while everyone is screaming that Belichick's decision cost New England the game, I beg to differ:

Blasting Belichick is easy to do, but it is not accurate. It does not give justice to what was a a truly great fourth quarter comeback. The Colts won because they played better than the Patriots during the "money time." They did not quit. They did not fold. They battled and fought their way back into the game, and when the moment of truth occurred on fourth down, the Colts executed. The Patriots didn't.

Special thanks once again to Pats Pulpit. Their team is impressive and their QB is a future Hall of Famer. It is because they are so great that this rivalry might be the best one in sports. Forgot Red Sox v. Yankees. Forget Man U. v. Chelsea.