Stampede Blue reader szquirrel has discovered a new, fun way to deal with the mindless drivel we receive from the haters in the media: Colts Media Hate Bingo.

Tired of those mainstream mediots hating on your beloved Colts? Sick of seeing those plucky Saints on top of every power ranking in the known universe? Can't stand reading one more fluff piece about how Brett Favre's sweaty jock strap smells like fresh unicorn giggles?

This "game," which is saved as a pdf, is nothing short of brilliant. Here is a quick image. 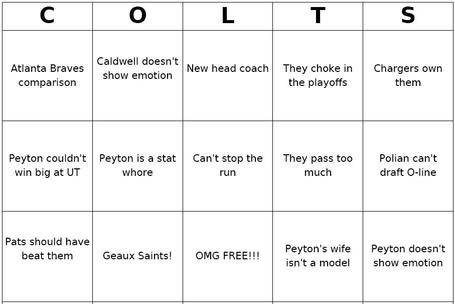 That's a bingo game so cool that even Redskins offensive coordinator Sherman Lewis can do it.

Colts Media Hate Bingo: Not quite as much fun as bitching and moaning about how Peyton gets no respect, but it's close! ™

Also, please be sure to rec szquirrel's FanPost.