From Adam Shefter, the God of Twitter: Anthony Gonzalez does indeed go under the knife, and more Colts news

Share All sharing options for: From Adam Shefter, the God of Twitter: Anthony Gonzalez does indeed go under the knife, and more Colts news

Adam Shefter is indeed the god of NFL Twitter updates: 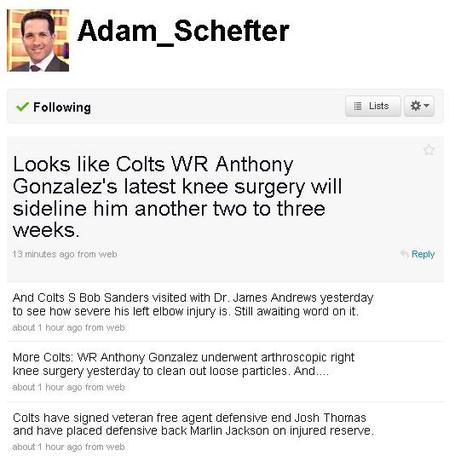 Shefter's report backs up the story from Yahoo! Sports yesterday. The positive out of all this is Gonzo's season is not over. They discovered loose particles in his knee, and they are getting them cleaned out. With Pierre Garçon and Austin Collie playing well, I have no problem with Gonzo chilling out until December.

The distressing thing is that Bob Sanders is (sigh) once again friggin hurt. This time, it's an elbow and it's serious. Players do not go to see Dr. James Andrews unless it is serious. Bob had already visited the good doctor about his knee during the year. Now, it's the elbow. You can scratch Bob from the lineup this week folks, because if Bob visited Andrews, that means a trip down to Alabama.

Again, it is because of things like this that I do not consider Bob the starting strong safety for the Colts. Melvin Bullitt started most of the 2008 season at strong safety, and it seems he will do the same in 2009. I'm perfectly OK with this because, in my opinion, Melvin is now better than Bob Sanders. Talent and "playmaking ability" are all great things, but they are all secondary to durability.

If you cannot stay on the field, you are not "good."

Also, Josh Thomas was signed to the active roster. Josh had been sitting out all season after playing for Indy during the pre-season.