Share All sharing options for: Know Your Colts History: Thank You, Marlin Jackson

Among the Colts' many casualties this week was Marlin Jackson, who tore his ACL in practice.  As you probably recall, Marlin tore his other ACL in practice last year.  Several athletes have gone on to have very successful careers after losing both ACLs, including one-man rebounding machine DeJuan Blair, but there aren't too many exceptions to the rule.  Given how much Marlin Jackson struggled to regain his pre-injury form, odds aren't good that he'll be one of the exceptions either.

Granted, Marlin can still go on to play a few more solid years of football, but odds are that those years won't be played in Indianapolis.  Marlin will be entering free agency this season and we all know the track record for players, especially defensive ones, entering free agency under Bill Polian: If you're not producing near or at Pro Bowl level, you better start packing your bags, because you will be replaced by someone younger, cheaper, and odds are, more talented than you.  We've seen it happen with Nick Harper, Marcus Washington, Jason David, David Thornton, Cato June, and a slew of others and it's hard to see why Marlin Jackson will be any different.

Since he probably won't be coming back next year, let's take a look back at Marlin Jackson's greatest moment as a Colt.  If you're having any problem trying to remember what it was, you should probably just stop reading now.

We can sit and argue all day about where Marlin Jackson's interception ranks among the best plays on the Colts' run to Super Bowl XLI and where it stands among the best plays in Colts' history.  If nothing else, I think most of us can agree that it did more damage to the history of another team's history than any other play in Colts history.

Without Marlin's pick, who knows what would have happened in those final seconds.  Yes, the Patriots only had about 20 seconds left and they would have had to go 45 yards in order to win the game, but even the most blatantly biased fan can admit that Brady is pretty spectacular when it comes to late-game situations.  If Marlin Jackson hadn't stepped in to steal that pass away, maybe Brady would have added to his legacy and removed the second-biggest scar on his legacy and the Patriots could have been on their way to a 4th Super Bowl title this decade.  If you think that Patriots fans are insufferable now, just imagine what it would have been like if a nickel back in his second year had picked a different moment to have the biggest play of his career.

Marlin Jackson epitomized the spirit of the team that won the Super Bowl XLI championship team: Every player on the team, regardless of their role, had a moment where they were asked to deliver and each player answered the call during that playoff run.  Now that it appears his time in Indianapolis is done, let's take some time to sit back and appreciate the contributions that he and the other role players on that team brought during that magical year. 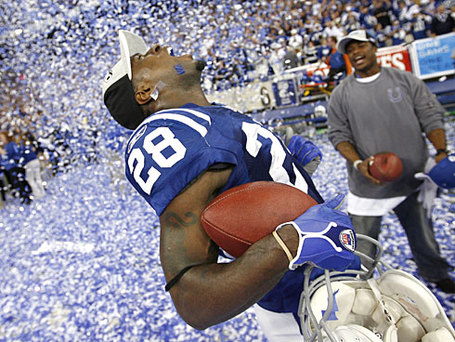