When the game was over, after the players exchanged pleasantries, the coaches shook hands at midfield, and the media did their round of post-game interviews and pontifications, Colts owner Jim Irsay gathered the team in the locket room and asked them to do something they probably hadn't done all season: Reflect.

Sunday's win over the very resilient Denver Broncos was the Indianapolis Colts 22nd straight regular season win, breaking a record held by the arch-nemesis of this franchise: The New England Patriots. The win also gave the Colts more victories in one decade than any other team in NFL history. Consider these outstanding, absolutely mind-boggling accomplishments, and then recall (or reflect, if you will) in your own minds the days of Jeff George, Eric Dickerson, Mike Pagel, George Wonsley, and Art Schlichter. Recall the 1-15 team from 1991, which scored a total (A TOTAL!) of 13 touchdowns for the entire season. Recall the 3-13 1997 team, which saw the Colts start the season 0-10. For all you old-time Colts fans, I know these names and these years are still pretty sharp in that noddle upstairs. So, when you look back on those years, and then look at what these Colts this decade have accomplished...

... yeah, I get why Jimmy Irsay wanted his guys to reflect a bit. Colts head coach Jim Caldwell summed it up well:

When you can go 22 straight in this league, that’s an accomplishment. That’s difficult to do. Obviously, it’s built on the shoulders of several guys who aren’t even in that locker room. There were some guys last year who were on the team that weren’t part of it this year. But, never the less, they built a cornerstone. [Former Colts head coach] Tony [Dungy] included in that group. When you look at the 113, now 114 victories in a decade, that’s a lot of wins, and a lot of guys took part in that.

For such a key, historical victory to come at home against a worthy opponent like the Broncos makes the win all the more special. Yes, many people will talk more about Brandon Marshall's historic day catching the football (21 catches, 200 yards, 2 TDs). People will talk about Peyton Manning throwing 3 INTs. It's how things go. Press and other media enjoy focusing more on individual accomplishments than on what a team does collectively.

For us, we will look at this win from the historical perspective. We will look at this win and how it will define this team, and this franchise moving forward. For while it did place the Colts into the upper pantheon of great NFL franchises of all time, more critical for the here-and-now is that the win locked up homefield throughout the AFC Playoffs. It created a first round bye, which is so very critical now that the Colts are injured and need some guys to get back healthy.

It also pushed the Colts record to 13-0 (same record as the currently undefeated Saints), making this the first time in 89 years of the NFL that two teams have entered the mid-December point of the season undefeated. 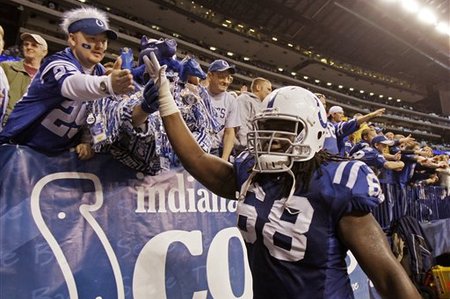 The game itself was like so many Colts games this season: A tale of two different sets of quarters. In the first and fourth quarters, the Colts dominated the Broncos. In the second and third, its was the other way around.

However, consistently throughout the entire game, the Colts defense was there making big plays to secure the victory. During a post-game recap will Colts radio announcer Bob Lamey, Colts President Bill Polian likened this game's defensive effort, intensity, and execution to the Baltimore Ravens playoff game the Colts won back in the 2006 playoffs. Jim Caldwell, who was with the Colts during that playoff game as an assistant coach, took it one step further:

"I'm not certain I've seen a better defensive effort than what our guys put forth today," Colts coach Jim Caldwell said. "They were very, very tough."

One of the key areas of weakness for this Colts team over the years was not red zone defense or limiting big plays, which is what Indy did to Denver's offense all afternoon. The weakness was short yardage, and allowing the opponent to convert on critical third and fourth down plays. In 2009, this new Colts defense, coached by former-Broncos assistant Larry Coyer, seems to excel when a critical stop is needed.

Despite Brandon Marshall's near-Herculean effort to catch anything and everything thrown at him, the Broncos never led in this game. The closest they ever got was five points, and that was in the fourth quarter. On two drives in the first half, the Colts defense stoned the Broncos on fourth down, including a very key fourth down stuff of Knowshon Moreno on the Colts 41 yard line. The Broncos went for it early on fourth down because the score was 14-0 Colts, and Broncos head coach Josh McDaniels didn't seem to have a lot of early faith in his defense. 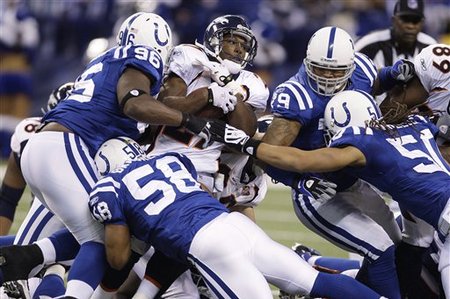 The Broncos would go for it again on fourth down; this time in the second quarter in Colts territory at the 45 yard line. Once again, they were stuffed.

In the second half, the Broncos clawed their way back into the game due in part to three second half INTs thrown by Peyton Manning. Granted, two of the INTs were off deflections. So, killing Manning for those seems a bit excessive. Regardless, prior to today, the Colts were 0-11 when Peyton Manning throw three or more INTs in a game.

The Broncos, however, were unable to capitalize fully on the Mannng INTs. One amazing stat that rarely gets discussed: The Colts have yet to surrender a TD off a turnover all season long. That stat alone is likely why this Colts team is 13-0.

Josh McDaniels maximized his team's offensive sets by isolating Brandon Marshall on the Colts new fan whipping boy, Tim Jennings. Jennings was playing because of a hamstring injury Jerraud Powers sustained earlier in the game. To Jennings' credit, he played and fought hard. He even got the better of the Denver offense by snagging an INT off Kyle Orton, who was clearly picking on him all game long. But, the reality is the Broncos wanted to isolate the 6'2 Marshall on the 5'8 Jennings, and it worked (somewhat) for them. 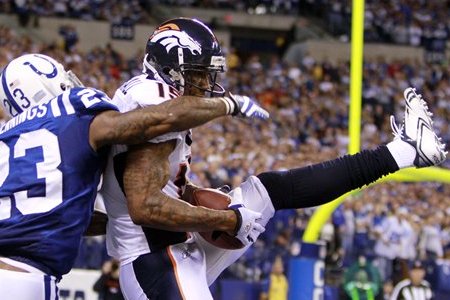 However, while a lot of people want to bash Jennings, the reality is for a player of his talent, he played very well. Marshall grabbed 21 footballs out of the sky, but not one reception was what is often called a "big gain." Sure, some were for key first downs. Two were for short touchdowns. But, none were for 50-yard TD strikes, which is what Denver needed if they were to have any hope of taking the lead in that game.

Down 21-0, playing a methodical, move-the-chains kind of game is not going to help you gain the lead. You need to score, and score quickly. Obviously, you don't want to panic, but taking nearly two and a half quarters to score 16 points is not going to help you beat a team like the Colts. By keeping all of the Broncos offense "in front of them," so to speak, the Colts defense was able to provide the offense a cushion of recovery, as they seemed to have fallen asleep during the third quarter.

When the fourth quarter rolled around, after the defense had contained Denver much of the day, Indy's offense woke up. They went on their seemingly patented, opponent throttling drives: 14 plays, 80 yards, consuming 7:19 of clock, culminating in a one-yard TD pass from Manning to Dallas Clark, who had three TDs on the day. The final drive iced the game, which concluded with yet another fourth down stop by the Colts defense. 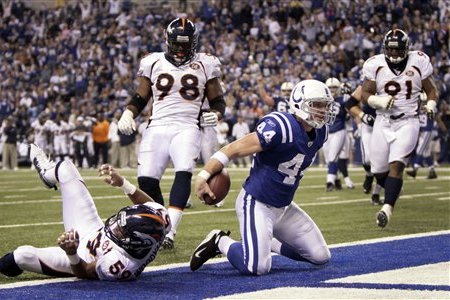 This game, probably more so than any other this season, summed up well these "new Colts." Teams in the past, perhaps even the stellar championship team of 2006, likely could not overcome a 3 INT performance by Manning, who also had 4 touchdowns on the day, I might add. These "new Colts" absolutely stoned the Broncos rushing attack, limiting them to 3.2 yards rushing for the game. Meanwhile, Joseph Addai continued to impress, averaging 4.2 a rush, while Mike Hart showed why he will likely get more playing time as this team moves closer to post-season play. On the foot-to-the-throat drive to ice the game, Hart made several key runs to move the chains and gain first downs. This kind of running was hard, physical, punishing running; the kind of stuff we don't often see from Donald Brown or Joseph Addai.

Credit goes out to the Denver Broncos, who never quit despite being down 21-0 early. We've seen a lot of teams quit this season. Heck, we likely saw Randy Moss quit on his team just yesterday. The Broncos didn't quit. Moocho respect for that. Hats off to their fan community at Mile High Report.

The Colts now enter the silly time, where the next three game have absolutely no meaning whatsoever. With so many players likely injured, and with the next opponent, the Jacksonville Jaguars, scheduled for this Thursday night, it might not be possible for the Colts to "rest starters" as they prepare for post-season play.

But, there is plenty of time to discuss options on what they should do moving forward. Right now, we savor the win. We savor the history. We savor the greatness that is Indianapolis Colts football. Colts owner Jim Irsay says it best:

"The way we are around here, we love to win," Colts owner Jim Irsay said. "To have that type of greatness, it's something that's unprecedented. When you think about 20, 30, 80 years from now, people will be referring back to you, it's really special."