After a while, the numbers start getting scary.

When you see them placed before you, in black and white with pretty charts to bracket their authenticity, you cannot help but stare at them as if they were an alien language unearthed somewhere in the Gobi desert by wandering nomads. They seem too fantastical, too unrealistic. Yet, they are reality. They are happening.

When the dust settled on the Indianapolis Colts 35-31 victory over the Jacksonville Jaguars, the numbers from the game, and the accomplishments for certain individuals and the team, began to crystallize.

And when you start looking at how the game, and the individual accomplishments in that game (Dallas Clark having the best season of any TE in NFL history, Reggie Wayne passing Raymond Berry for #2 all-time in Colts receiving, etc.), the numbers truly ring home just how special and talented this group of Colts really are.

But more impressive than the numbers and the stats was the drive, the passion, and the determination to win a game which, quite frankly, "meant nothing." All week long, we had wondered who was going to play, and for how long. Would Peyton Manning sit after a few series, or a quarter? By halftime, Manning was 12-12 with two TDs and the Colts up 21-17 on the road against the desperate and determined Jaguars team.

Though "meaningless," the Colts certainly did not play and coach this game as if they were simply looking to rest. The fought to win; truly win. And win they did. And after Jacob Lacey put the finishing touches on another brilliant come-from-behind victory, the win provided yet another bold claim for Peyton Manning to win his NFL record 4th MVP award. 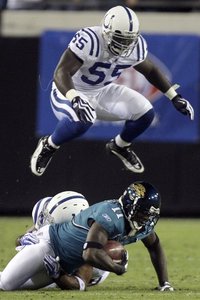 Before we start jumping into all the wonderful positives that came out of this game, let's get some of the concerns out of the way. First off, concern-trolling, or hand wringing, about the defense at this point is silly. For fourteen friggin weeks, we've seen them play like a top 5 group. One game should not offer cause for concern, especially when you consider that this game was played only four days after the defense had one of it most physical challenges in ages against the Denver Broncos. The D was hurt, tired, and playing against a tough, physical opponent whose game plan was to take advantage of the Colts fatigue. Factor in that Dwight Freeney and Robert Mathis only played on passing downs, and that Indy was without Jerraud Powers, and the performance through the first three quarters was not all that surprising.

Also, consider that in quarter four, the Jaguars were shut down and shut out by this fatigued defense, and that Maurice Jones-Drew was virtually a non-factor in the final quarter when his team needed big plays to win the game.

Then, there were the field conditions. Last night, they were in piss poor shape. Colts announcers Bob Lamey and Will Wolford commented on the conditions all evening, saying how how patches of field were getting ripped up all over the place. Players slipped and fell all game long. The field contributed to Pat McAfee's "meh" punts and kick-offs, and likely contributed to both teams doing a sub par job covering on special teams (with the Jaguars looking much worse than the Colts).

So, while some might moan and complain that the 31 points will hurt Indy's defensive scoring average, or others might fret that this game "exposed" the Colts defense, my response is to calm down, stop being such a stats loser, and look at the game with the proper perspective. This was a game of attrition. The opponent wanted to wear the Colts down, and beat them senseless in the fourth quarter. They failed, and a big reason why they failed is the Colts defense. 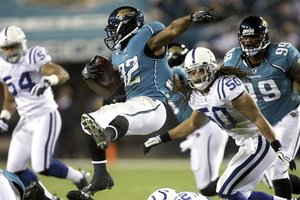 Last night's game saw several players step up and deliver in the clutch, something the Colts have seemingly re-written the history books doing this year. Much maligned by Colts fans this season, the game was a bit of a coming out party for Colts strongside linebacker Philip Wheeler. Wheeler was handed the starting job during OTAs, but after pre-season he was benched due to ineffective play in favor of Tyjuan Hagler. Several weeks ago, Hagler was placed on IR with a torn biceps muscle and Wheeler, one again, was the starter. While we have definitely seen flashes of improved play (like the forced fumble on the goal line again Laurence Maroney and the Patriots) overall Wheeler's play has been sub-standard.

That was, until his 11 tackle effort last night, with several of those tackles key plays to stop human-wrecking-ball-Jones-Drew.

There was also Eric Foster, who played at both DE and DT last night. Foster notched two absolutely HUGE sacks in the game, with one causing a Garrard fumble on the Jaguars opening drive that should have been recovered by Gary Brackett. It wasn't, and the Jags kicked a 50-yard FG. Foster earned his second sack with 3:03 left in the 4th quarter, ending a Jaguars drive as they tried to reclaim the lead following Peyton Manning's 65 yard TD bomb to Reggie Wayne, which ended up being the game-winner. 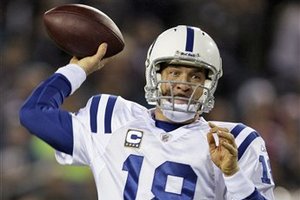 Speaking of Manning, this game, just like last year's contest in late December (almost to the day) against the Jaguars, might have locked up another MVP award for the best QB in the NFL. Other than Dallas Clark bobbling a sure first down that hit him square in the hands (with the deflection getting picked off by Daryl Smith), Manning was virtually flawless. For the second game in a row, he threw 4 TDs. His 134.4 QB rating in the game, against a playoff-caliber team on the road, is the kind of performance that locks up MVP awards. All the voters watched that game, and if they did not come away impressed they should have their voting rights stripped from them while a midget kicks them repeatedly in the nuts.

Unless Drew Brees looks equally impressive this Saturday (at home, not on the road like Manning) against the Cowboys, Manning likely has gained enough support to win his NFL record 4th MVP award.

Overall, I cannot shower enough praise on Colts coach Jim Caldwell, who managed this game exceedingly well. Freeney and Mathis are nursing injuries, and you have to think that if Tony Dungy were still coaching that both players would not have played. Caldwell placed the two stud pass rushers on a "pitch count," using them only on passing downs and in the fourth quarter. The result was David Garrard playing rather poorly.

When you average 5.6 yard a completion, and 4.9 yard per passing attempt (as Garrard did), that is indeed playing poorly. 40 attempts and only 223 yards is pretty "ugh." Garrard also had a near disastrous fumble and he threw three INTs. The game was close because the fumble was not recovered by the Colts and two of Garrard's three INTs were dropped by Antoine Bethea and Kelvin Hayden. As many of you know, I'm not a Garrard hater or anything. I personally think he is a fine QB. But last night, he got lucky on several key plays. His luck ran out in the fourth quarter, where Garrard was simply pitiful. He had three chances to help his team score and possibly retake the lead, but instead was forced to punt once, took a key sack on the next drive, and on the final drive threw an INT to Lacey at the Colts 33 yard line.

To Garrard's credit, he is indeed a tough guy. He took a vicious hit from Eric Foster late in the game, and it seemed that for a couple of series, Garrard might have thought his name was "Batman." However, he didn't leave the game and didn't call a timeout to deal with the injury. Again, serious tough guy. Major props.

When all is said and done, you have to tip your hat to the Jags. We joked this year that they were "dumpster fires," but last night they played all out, guns blazing. They had fire, sans dumpster. They played the way a team desperate for a playoff spot should play. Special thanks to the Jaguars fan community at Big Cat Country for a fine week of blogging.

With the Colts 14-0 for the first time in franchise history, the discussion now will shift to "going for perfection." Myself and several of our writers here will pontificate on this subject for the next few days, and I'm sure many of you readers out there have your own strong opinions one way or the other. But, for me, after watching last night's contest, and seeing how this team has played all season long, my opinion now has changed somewhat.

The games "mean something" now, and I think the Colts should not rest any starters for Weeks Sixteen and Seventeen. This is a special group, and the deserve have the best players out there for four quarters these next two games.