Share All sharing options for: Great Colts of the Decade: Assistant Coach

Obviously, if we did a poll of best coach of the decade, Tony Dungy would (and should) will it unanimously. I say this not to slight or disrespect Jim Mora, who coached the Colts from 1998-2001. While we oftentimes laugh and chuckle at Jim Mora's now famous "PLAYOFFS!" line from 2001, the fact of the matter is he was one of the most important coaches this franchise has ever had.

Prior to Mora, under both the Lindy Infante and Ted Marchabroda coaching tenures, it was evident that effort and dedication to the team were not high priorities of all the players on the roster. We would see players dog it Randy Moss-style on a consistent basis, but not see any accountability.

That changed with Jim Mora.

The tone and attitude of the team changed dramatically from 1998-2001. Gone were lazy players who only worked for their paycheck. Gone was inconsistent effort and a lack of accountability. There was no better example of Mora's emphasis on accountability than the benching of Marshall Faulk in 1998.

Mired in a terrible season featuring a then-rookie Peyton Manning, Jim Mora had serious discipline issues occurring within a very fractured Colts team that year. No one player epitomized this than Marshall Faulk, a guy who would routinely call out players to the media without having seemingly any accountability for himself. One day, Faulk showed up 5 minutes late to a meeting. He was pulled aside by Mora, who informed him he was going to be fined for being late and would be benched to start the game that week. Faulk was livid, but the message was loud and clear.

No one is above the team. Players made sure to show up on time to meetings in the future. Team focus and accountability stopped being internal issues with the Colts organization.

While Tony Dungy is very much a first ballot Hall of Famer, and arguably the greatest overall NFL coach of this decade (aka, he won games without needing to cheat), Dungy is always quick to point out that (unlike his tenure with the Buccaneers) the Colts team he inherited in 2002 did not lack focus or desire to win. And Dungy attributed that to the coaching of Jim Mora. 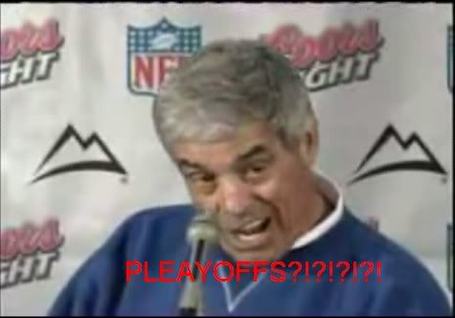 We do indeed love ya, Jim. Thanks for helping make our team a winner.

So, while we will not vote on coach of the decade (because it is so obviously Tony Dungy), we give a shout out to Jim Mora, who is also responsible for many of the assistant coaches were are voting on in this category: Best Assistant Coach of the Decade.

The Colts have had remarkable consistency in their assistant coaches this decade. Coaches like Howard Mudd and Tom Moore have been assistants with this team since 1998, brought in by then-head coach Jim Mora. Other assistants, like John Teerlick and Mike Murphy, have been coaching in Indy since 2002, helping to turn a porous defense into a contender. There are also assistants like Ron Meeks, who was partly responsible for Indy's defensive turn around. Players like Marvin Harrison and Reggie Wayne thrived under Clyde Christenson's coaching. Peyton Manning won three MVPs with now-current Colts head coach Jim Caldwell as his QB coach. The best running backs coach this league has ever seen might be Gene Huey. He has turned Marshall Faulk and Edgerrin James into stars, and took players like Dominic Rhodes and turned them into 1,000 yard rushers.

Bottom line is this voting will be tough. Indy has a stable of great assistant coaches.