Only six other teams in NFL history have started 12-0 in this league. One of those teams was the 2005 Colts.

21 regular season wins in a row, tying an NFL record, which was much fawned over when it happened, held by the New England Patriots.

An NFL record seven straight seasons with at least 12 wins.

These are all records that are to be cherished, respected, and honored. Many will try to dismiss or diminish these accomplishments, but such talk is the action of haters and fools. This football team we know and love, these Indianapolis Colts, have achieved some very special, very awe-inspiring feats of late, and it is my sincere hope that each and every one of you does not fall into the black pit of cynical thinking by looking for ways to poke holes in all these accomplishments. And while it is certainly not the custom of the team to sit back and think "Gosh, we built a powerhouse this decade," we fans are permitted to enjoy the special accomplishments our beloved Colts have worked very hard to give us.

The Colts reached many of these amazing milestones with a tough 27-17 win over their division rivals, the Tennessee Titans. The Colts led from start to finish, forcing Vince Young into several critical mistakes, miscues, and misfires while also containing the volatile Chris Johnson by holding him out of the endzone. The win gives Indy the sweep of the regular season series over Tennessee. The Colts had already won the AFC South going into the game, but by beating the Titans it all but assures that the Flaming Thumb Tacks will not make the playoffs in 2009.

The way Indy won the game was also special. They "out physicaled" the Titans and beat them to the punch, mentally. At no point in the game was that more obvious than in the closing seconds of the second quarter. Indy was pushing the Titans off the line of scrimmage and driving to attempt a field goal. The previous series, the Titans scored on an impressive TD drive to cut the Colts lead 21-10. The Colts had two timeouts and less than 20 seconds to get into FG range. However, on a first and ten from the Titans 45 yard line, with 10 seconds left on the clock, Titans defensive end Tony Brown did what we have seen the Titans do all year: Freak out and lose composure. After a play, he got into an altercation with Kyle DeVan, who had been blasting Ford and other Titans off the line of scrimmage all day. Brown grabbed DeVan's facemask and poked him in the eye right in front of a ref.

That play right there just about summed up the game. The Colts were more physical and more mentally tough than a Titans team that is often (incorrectly) lauded for such things. And while there are many positive things I took from this game that relate to the Titans, the bottom line is there is a reason the Colts swept them this year, and that Tony Brown penalty (which should have gotten the punk ejected I might add; Ron Winters is a schmuck) gives you a clear indicator why. 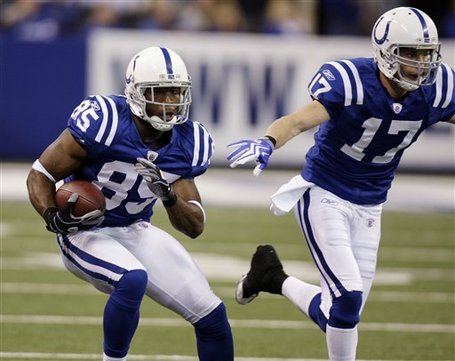 There's lots to take away from this game: 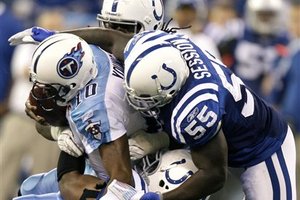 Like all games, both wins and loses, there are negatives. The 56 yard kick return by Kenny Britt was frustrating, especially after seeing this special teams unit play so very well all season long. The Jacob Lacey pass inference call was stupid on Lacey's part, but not as stupid as Daniel Muir once again failing to bring down a QB when he's got the dude in his grasp. We saw Muir (who has played brilliantly all season) whiff on a sack against David Garrard in Week One, and he did it once again against Vince Young on Sunday.

Speaking of Vince Young, while he was awful throwing the ball in the redzone Sunday, and made some poor decisions that, to be honest, should have given him three picks on the day (one caught, two dropped) I must say that Vince has indeed improved. And yes, the Colts were given a gift with Nate Washington dropping that sure TD pass after he beat Jerraud Powers, but the Titans were also handed a gift later when Kelvin Hayden did not haul in Vince's terrible sideline throw. Had Hayden made that catch, it's a pick six the other way.

Is Vince a smart quarterback now? No. He's still pretty clueless reading defenses and making good decisions with the football. However, he did show significant improvement on Sunday throwing the football. Both of his TD throws were crisp, accurate, and thrown with velocity from the pocket. That's a good sign if you are a Titans fan. All this running around and option-draw-crap is fun for a while, but it doesn't consistently win you football games. Throwing accurately from the pocket does.

So, despite his terrible INT to Lacey in the second quarter, and his poor red zone throws, Vince did show me he has improved from the over-hyped sack of crap he was from 2006-2008. He's building on something. It's taken him four years to do it, but he has progressed.

With the Titans all but eliminated from the playoffs, all talk of Chris Johnson for MVP should cease. If it doesn't, the people screaming for it need to be ignored. Johnson is a magnificent player. He had averaged 160 yards a game during the Titans five game winning streak. However, the Colts bottled and contained CJ, holding him out of the endzone and preventing any splash plays. This was a game the Titans had to have to stay alive; the kind of game an MVP steps up and helps his team win. Johnson didn't do that today, and much of the reason why he didn't was the Colts defense. Though Johnson is no longer a serious MVP candidate, I personally believe he has supplanted Adrian Peterson as the best RB in football. Johnson can do everything Peterson can, and also NOT fumble.

Overall, this was an impressive win. To be that physical and that mentally tough against a team that was red hot coming into this contest sends a message. I know that as a fan I am very proud of how this team has developed, despite injuries and other distractions this team has achieved some truly lasting feats. With the Saints defeating the Redskins in an overtime thriller, we have (again, for the first time in 89 years of the National Football League) two 12-0 teams in December. That's special. This Colts team is special. Enjoy the special.