A little discussion about the 2009 Most Valuable Player Award

Share All sharing options for: A little discussion about the 2009 Most Valuable Player Award

I'm a Colts blogger. So, naturally, I'm going to tell you that Peyton Manning is the 2009 NFL MVP. And while there is the rather annoying sentiment out there that "They could give it to Peyton every year," the truth of the matter is the MVP award often goes to the best player in the NFL who also happens to be making a playoff run. If the MVP goes to any other sort of player, it cheapens the award; makes it nothing more than a popularity contest on par with the Pro Bowl, American Idol, and a local bar's wet tee-shirt contest.

And when you look through the numbers, the wins, and the overall play of the candidates, there is absolutely no doubt that, right now, Peyton Manning is the league's Most Valuable Player.

When judging candidates, you must first ask the following question: Are the players everyone is blabbing about making a playoff run? MVP candidates must make the playoffs. It's embarrassing if they don't. If you disagree, fine. You're clearly in the minority. In the history of the modern NFL, no MVP winner has missed the playoffs.

This means that if you are considering a player like Titans runningback Chris Johnson, the answer is no.

The Titans are done for 2009. If by some miracle they get in, it's because some other team choked and the Titans were lucky enough to back-in to post-season play. Doing this suggests that the faults of another team were the reason why the candidate is in the playoffs, and not the play of the candidate himself. Plus, in a monster game against the Colts last weekend, with a chance to climb out of a 0-6 hole and get back to .500, Chris Johnson was held out of the endzone all day with his longest run only accumulating 11 yards. That's not MVP play.

Thus, Chris Johnson (who is still the best RB in football, I might add) is out. 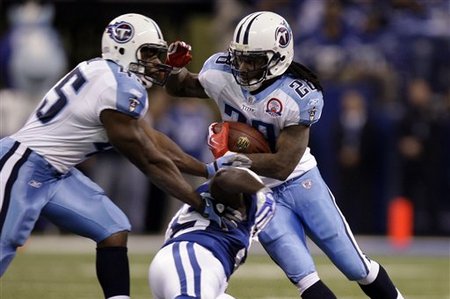 The second thing you absolutely must cut out of the equation is sentimentality. This is an award for athletic excellence, not a lifetime achievement award. This is why I got so frustrated and annoyed with my own colleagues at SB Nation last year when half of them voted for Chad Pennington as Most Valuable Player.

The term "value" is not divorced from the term "good." And while Chad Pennington is certainly not a bad quarterback, you are a moron of truly epic proportion if you think Chad Pennington is as good a QB as Peyton Manning. In the case of my SB Nation colleagues, I think they forgot to include the "good" in with the "valueable."

This year, the sentimental pick is Brett Favre. Big Whigs like Peter King practically have their vote for Favre cast, regardless of what they are publicly writing. But even before his little stumble Sunday night in Arizona against the Cardinals, Favre was not a true MVP candidate. While there is no doubt that Favre's numbers are some of the best of his truly great career, the fact of the matter is the Vikings have played the kind of schedule that would make the UFL champion Las Vegas Locomotives look like world beaters. The Vikings have played the 25th toughest schedule in the league, with teams like the Lions (twice), Browns, and Rams all counted as wins on their schedule. Against two potential playoff contenders, the Steelers and the Cardinals, Favre has played some of his worst football. Both those games were on the road, and an MVP candidate must show that he can help his team win big games on the road.

Thus, Brett Favre (who is a truly amazing player, regardless of what the haters think or say) is out. 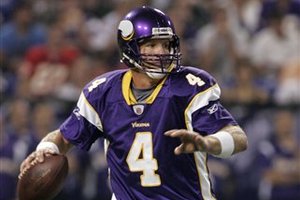 This leaves us with two truly viable candidates, and only two: Peyton Manning of the Colts and Drew Brees of the Saints.

The MVP "race" is between these two gentlemen, and anyone suggesting otherwise is just wasting your time. Both are putting up amazing numbers. Both are QBs on teams that have yet to lose a game. But when you truly compare both candidates, the argument for Brees shrivels up and dies rather quickly.

Now, before we get into the details, please note that all of this goes out the window if and when the Colts start resting Manning once their playoff position is locked up. If the Colts start resting people going into the playoffs while the Saints continue to play starters in meaningless games, Drew Brees will indeed win the MVP. The press will love the Saints for "Going for Perfection" and reward them with an MVP vote for their QB. 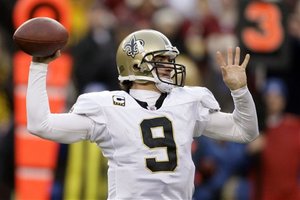 Does this kind of thing cheapen the MVP award? Yes, and the main reason why is the Saints (like the Vikings) have played a cupcake schedule. Also, with three of their last four games against the dreadful Buccaneers, the sorry Panthers, and the disappointing (and injured) Falcons, the prospects are very high of the Saints building big leads against these clubs early only to (shock!) rest starters in the second half of those games. Meanwhile, the Colts play the Broncos and Jaguars in back-to-back weeks. Both teams are currently in the playoff picture, but need to keep winning if they want to remain in. Following the Jags game, the Colts play the desperate New York Jets, who are still in playoff contention, but are on the outside looking in. So, that's three games against potential playoff teams with one or two of those games being utterly meaningless for the Colts.

However, regardless of whether the Colts will rest starters or not, Peyton Manning should indeed win his fourth (and NFL record setting) MVP award. The Colts have played the 7th toughest schedule in the NFL. The Saints have played the 24th toughest. Indy also plays in the NFL's toughest division, with all four teams potentially ending the season with .500 or better records. In games against quality opponents like the Patriots, Ravens, Cardinals, Titans, Jaguars, Dolphins, and Texans, Peyton Manning has thrown for 2,750 yards, 20 TD, and 10 INTs.

Consider those numbers and then compare them to Brees, who has feasted on teams like the Bucs, Panthers, Bills, Rams, Redskins (who the Saints almost lost to), and Lions. Now, obviously, Brees cannot control the teams on the Saints schedule. However, when comparing candidates, especially two quarterbacks playing extremely well for two undefeated teams, you absolutely must take into account who they have played. So far, Manning trumps Brees in this area.

Manning is also currently leading the league in passing yardage (3,685 yards) as well as completion percentage (70%). The fact that Manning is doing all this with the #32 ranked rushing attack and (essentially) two rookie wide receivers is nothing short of astounding.

Overall, the MVP race should be an exciting one as we head into the home stretch for the 2009 regular season. And, unlike last year, laughably bad candidates (like Kurt Warner) are not polluting the competition for the award. But, at the end of the day, this award is Manning's. He has played better than Brees against better competition, and has shown an uncanny ability to do more with less around him.

If you have thoughts or other ideas on the MVP candidates, please add them to the comments below.

[UPDATE]: Be sure to check out DevilsReject's FanPost on the MVP race as well.