10 players sat out today, 8 with injuries. Charlie Johnson, Anthony Gonzalez, Donald Brown, Aaron Francisco and Adam Vinatieri remain out and were joined by defensive starters Robert Mathis (quad) and Clint Session (calf) along with Tony Ugoh (hip), making the reason for the move to sign Toudouze clear. Antoine Bethea and Dwight Freeney got the day off.

Notable return by Keyunta Dawson, back after missing several weeks with a knee injury. With Mathis hurt Dawson's return adds much needed depth.

One last off topic note.     Not a fan of Clint's neckbeard, maybe it's in honor of Orton or something.

via www.colts.com
but maybe that's just me.  Let me know.

Update: I am forever indebted to commenter Gio for this pic of Clint "Papa Smurf" Session 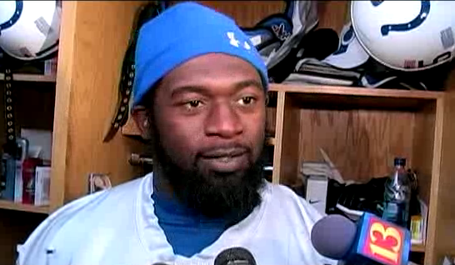