Only 3 players started at OT for the Colts, but Federkiel was to be the next man off the bench (or the interior line). The converted defensive tackle from Medicine Hat, Alberta started the first 3 games of the season and the Colts last of the year. He appeared in 9 more as a special teamer/reserve OL.

The line struggled, giving up 6 of their 15 sacks for the season, gaining 3.4 yards per carry and 64 yards per game on the ground in the 4 games Federkiel started. In his defense, the line also had Jamey Richard in for Jeff Saturday, faced 3 of the leagues strongest front lines (CHI, MIN and SD) and behind the line Peyton's mobility was limited in the first 3 games. 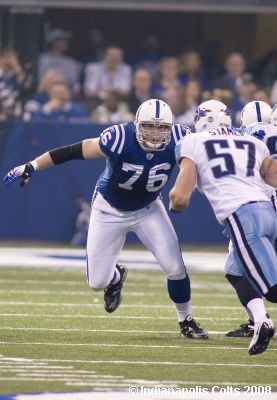 1.01 million-which gives the team the "right of first refusal" (meaning they can match any contract a team offers the RFA) the low tender also gives a team compensation for a RFA that's signed alway equal to that players original draft position

1.545 million-gives right of first refusal and 2nd round compensation if the player is signed away.

2.198 million-gives right of first refusal and 1st round compensation

2.792 million-is the highest compensation level and gives first refusal and 1st+3rd round compensation.