Back in the blogging saddle; People warming to Coyer

Share All sharing options for: Back in the blogging saddle; People warming to Coyer

I got back last night from spending (basically) a week in the Upper Peninsula of Michigan. Let me just say that for you outdoorsman-types, there is nothing more beautiful than the UP. I've never been to British Columbia (yet), but I imagine it is on par with the UP. Beautiful rivers, lakes, streams, hills, mountains, and other vistas. A "heat wave" raised the temp above freezing while I was there, but I still saw plenty of ice fishing in the lakes. I personally do not do any hunting, and I haven't fished since I was a kid, but if you are an angler or a hunter, take a trip to the UP. I can suggest a great lodge. 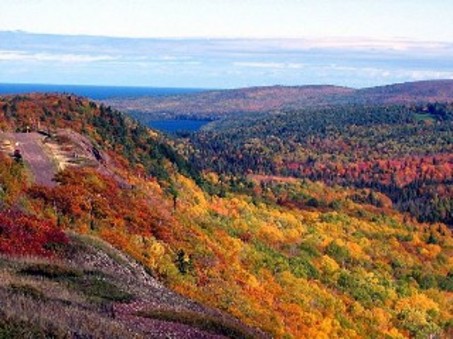 The UP in the Fall

Oh, and thanks to all of the kind words in the comments here. Getting married is a time consuming, stressful thing. The fight is to keep it in perspective: The wedding should be FUN! I have made my own personal plea that we not get married on a Sunday... especially during football season.

Back to the off-season, free agency starts in two weeks, as does the Combine. This little lull we get post-Super Bowl used to last three months. Now, it lasts two weeks. For the Colts, the key the last month was locking up their vacant assistant coaching spots. Already, people (like those at Pro Football Weekly) are warming to one of the new hires, defensive coordinator Larry Coyer:

Among the first significant decisions Jim Caldwell made as head coach was appointing longtime NFL assistant Larry Coyer as defensive coordinator. It was a clever move on numerous fronts. Most importantly, Coyer comes directly from Tampa Bay, where he was schooled in the Tampa-2 defense of Monte Kiffin. Because not much player personnel movement is expected on the defensive side of the ball in Indianapolis, keeping the Tampa-2 defense intact for the foreseeable future is the prudent move.

As Bill Polian re-iterated in his interview this past week, new head coach Jim Caldwell has no plans to change the schemes for the Colts offense or defense. So, all those screamers on the message boards wailing "WE NEED TO SWITCH TO A 3-4!" can kindly slither back under their rock now. The Colts are a well built Tampa-2 team with insanely good talent at several key positions. Consider that the only sacks the AFC got in this year's Pro Bowl came from two people who happen to play for the Colts: Robert Mathis and Dwight Freeney. Likely, Coyer will tweak a few things by adding in more linebacker and safety blitzes, but these blitzes will not become the staple of Indy's Tampa-2.

And for those who need a refresher: The Colts played outstanding defense in 2008. Yes, they did. When you look at all the injuries and issues this team had, and then compare it to what was produced on the field, it's clear the Colts were a strong defensive team in 2008. Even Bill Belichick took notice. Despite an offense that could not run the ball and rest their defense, the Colts D set a record for fewest TD passes allowed. They shutdown the Pittsburgh offense IN Pittsburgh, shut out the Titans, and held Chargers QB Philip Rivers in check during the playoff game. They did this all year despite significant injuries to Bob Sanders, Gary Brackett, Kelvin Hayden, and Marlin Jackson. They did this despite the musical chairs at DT. They did this despite having no pass rush other than from Dwight Freeney and Robert Mathis.

The Colts were a tough team to score on in 2008. Coyer is inheriting a tough unit that knows how to rise to the occasion. The key to getting them back to playing dominating defense (like at the end of 2006 and much of 2007) is to get the DT position shored up.