Before this season Jeff Saturday had started 126 of 128 games since becoming a starter. He doubled those games missed this season. The splits with and without Jeff Saturday this past season are dramatic. The table below gives the Colts performance compared to their opponents season average (with the Indy games removed).

Saturday turns 34 before the start of next season, but 2 of the 3 Pro Bowl centers from the AFC were over 34 (Kevin Mawae, 38 and Casey Wiggman, 35). Both NFC Pro Bowl centers were 30 or older. Besides Quarterback no other position is so dependent on experience and intelligence over strength and speed. 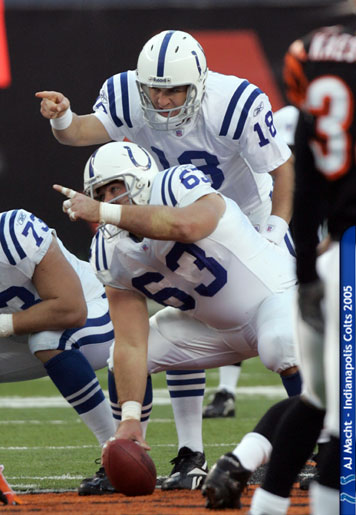 While other factors were at play, without Saturday in the lineup, Indy's offense was solidly below average, the running game was awful and the pass protection was merely good. With Saturday Indy was a well above average scoring O, was just a sub-par running team and gave up over a full sack per game less than their opponents averaged.

If the cap situation wasn't so tight letting Saturday walk would be unjustifiable. Unfortunately the front office has some tough decisions to make. Saturday has gas in the tank, but Indy may not be able be able to pay for it.