One of the first salvos of free agency sent a cannon ball through the deck of the SS Tennessee Titans. Our old friend, Fat Albert, has signed a 7-year $100 million contract with the Washington Redskins. From ESPN:

The deal, which was reached early Friday morning, includes $41 million in guarantees. During the first 13 months of the contract, Haynesworth will earn approximately $32 million.

This means Fat Albert, a guy who routinely took plays off and once stepped on an opposing player's face with his cleats, is the highest paid defensive player in football. For us, the positive is this fat tub of crap is out of the AFC South. Sure, he was lazy. He was also damn talented. When he finally did put his mind to something, he was hard to block.

For Titans fans, this loss is the equivalent of the Colts losing Peyton Manning. Haynesworth WAS the Titans. He was their best player. He was the lynch pin that held their outstanding defense together. Now, in the span of two years, the Titans have lost defensive linemen Travis LaBoy, Antwaan Odom, Antonio Johnson, and Haynesworth. That's a lost of talent left to walk away.

Does this mean the Titans will suck next year? No. Does it mean they are an inferior team to the Colts? Yes. Hayensworth was the only one on their defense the Colts had trouble with. I'm sure Jeff Fisher will find some good guys to fill in, and the Titans will be tough. But one does not simply replace a talent like Haynesworth.

Still, I'm sure Titans fans are not too broken up by Albert leaving. $100 mill is way to much for him, and the feeling always was he played hard these last two years because he was franchised each year. Now, he has his guaranteed $41 million. Redskins fans should indeed be worried. 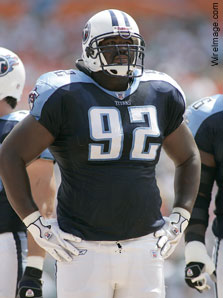