It's time to put Peter King out to pasture

Share All sharing options for: It's time to put Peter King out to pasture

That is a quote from Peter King recently, transcribed by 18 to 88 from this audio interview. I've railed against this fat, bloated prick for years, citing example after example of how this guy knows absolutely nothing about football. Yet, he is one of the most powerful people in the football world. He is a member of the Pro Football Hall of Fame voting committee. That is a very prestigious honor. And yet, despite having so much power, this Jabba the Hut schmuck actually questions the Hall of Fame credentials of Marvin Harrison.

In a day when people are honestly discussing the Hall of Fame candidacy of Kurt Warner and his FOUR good years as a QB, I have to begin to question the sanity of voters everywhere.  Apparently, the Hall of Fame has become about 'moments' more than about performance.  Peter King is basically saying, "I don't care about 7 All Pro teams, records and huge numbers for more than a decade.  I prefer one game or one catch I can remember."
.

I just gave you a few seconds to chew on those words.  Have we really become so simplistic?

We haven't, no. But Peter King has. And now, it is high time some people start to question whether or not he is fit to vote for candidates for the Pro Football Hall of Fame. I'm serious. This kind of statement makes me really question Peter King's competence. When a guy like Harrison (who has amassed 1,102 receptions, 14,580 yards, 128 TDs, won a Super Bowl, set the single season record for receptions, and will end his career second only to Jerry Rice in pretty much all meaningful receiver categories) has his HoF credentials questioned, the issue is not Harrison.

The issue is the dumb ass questioning him.

I'll make this very simple for football traditionalists and for people (like me) who care about the Pro Football Hall of Fame: If Marvin Harrison is not a first ballot HoF selection when he retires, then the Hall of Fame is an utterly meaningless "honor," stripped of all legitimacy and integrity. It then becomes a sand castle, built on superficial foundations and ruled over by a gang of uninformed, ignorant fools.

In essence, it becomes as relevant as the Pro Bowl.

This was the final straw with Peter King and his ignorance. I'm now pretty much done with him, unless he clarifies his statement. I doubt he will. Not only are Harrison's "numbers" good enough, but King actually puts more emphasis on snap shot "moments" over long term career accomplishments. It's unreal. And to make King look like even more of a dumbass, he makes himself look like someone who doesn't WATCH FOOTBALL. Again, THIS IDIOT IS A HALL OF FAME VOTER, claiming he can't recall "the signature catch" or "great game" from Marvin Harrison. I guess he's never seen this catch:

Or this one made against the Titans in 2003: 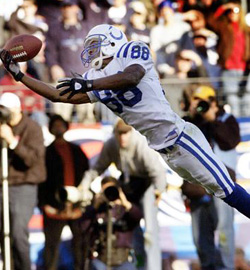 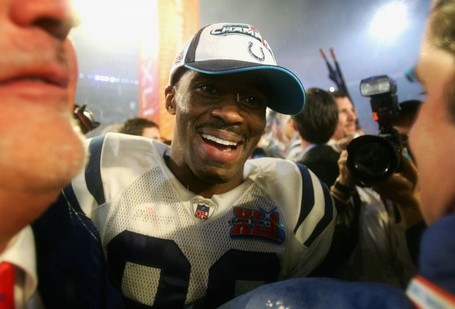 Marvin's "signature catch" was the seemingly impossible to make. His great games rivaled Rice, Swan, Biletnikoff, and Berry. All King had to do to see these remarkable plays was go to YouTube and type "Marvin Harrison." I mean, forget the fact that these plays are burned in the minds of just about every person who has watched football over the last 12 years or so.

I'm serious, folks. I think something is wrong with Peter King. Either he is one of the football industries biggest frauds, or he is just THAT f*&king stupid. Regardless, the conclusion is clear: Peter King doesn't know anything about football, and yet is the most prominent writer in media today ON football.

The Hall of Fame induction committee or team or whatever they are better take a long, hard look at King. If not, that building in Canton could turn a meaningless shrine to the idiocy of peons like Peter King rather than a true professional football Hall of Fame.