Dallas had his best season yet for the second straight year. He improved his career high in receptions by 19 and yards by 232, but didn't repeat his 11 TD performance of last season (he had 6).

The OL's struggles and Anthony Gonzalez's continued development moved Clark from what FO called a "Tight End in Name Only" back into his previous role as a TE that plays some slot. The role change didn't keep Clark from flourishing despite him losing receiving opportunities when he was called on to help the OL pass block more often. Dallas is still a receiving TE, but he's become a decent inline blocker and is excellent blocking from the slot. The Catch % is what jumps out at me. 72% is among the very best of TEs this season. The last two years Clark's hands haven't been what you would hope for from a receiving TE (catch %s of 53 and 57 the last two years) 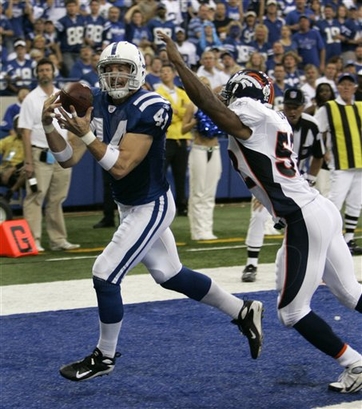 Clark's extension after last season made him the only Colts signed past the 2012 season. Clark has 5 seasons remaining on his deal. The deal could be restructured this offseason due to it's massive 09 cap hit.