Offensive Line play isn't something an average (or even most informed) fans watch closely and it's rarely measured by stats directly. It's not hopeless though the limited observation and some indirect statistical info can give a view of a line and the individual linemen.

We'll kick off the Offensive Line with it's most controverial member. Bust or inconsistent because of youth? Injury prone or Unlucky? Benched or Injured early in 2008. 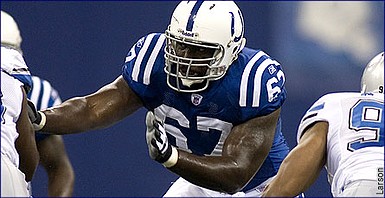 Ugoh started 12 games at left tackle and appeared in another 3 as a reserve and on special teams. That is the entirety of his individual stats, but we can continue to take a look with FO's line stats sorted by run direction and schedule adjusted running and pass pro stats with and without the player.

The Colts did not run well. FO ranked the Colts line 23rd in adjusted line yards. Between and behind the tackles the run performance was pretty uniform (and mediocre). However the Colts did have some relative success running to around left end (or relative failure running wide right if you like your run blocking half empty). Indy ranked 9th in the league on runs marked left end. While running directly behind Ugoh wasn't overly effective (18th), runs wide left that heavily, but not totally, relied on him were very good. This isn't simply an example of Indy's signiture stretch play being effective, the Colts running game was at it's most inept going wide right (31st).

Here are the per game stats with and without Ugoh. "vs opp. ave." is the difference between the game against Indy and the team's per game for the season.

The run game was more effective in the games Ugoh missed, but that's entirely from the strength of schedule. With Ugoh out, Indy faced two terrible run Ds (GB and HOU) a mediocre one (Jax) and banged their head against the wall on 30 carries for 76 yards against the Ravens excellent run D.

So despite Ugoh being known as a better run blocker than pass protector Indy's run game remained nearly exactly the same without him and it was the passing game where there was a difference. A large difference in fact. In the games with Ugoh Indy gave up over a whole sack less per game than their opponents averaged. Without Ugoh that number was half a sack prevented per game.

I still believe in Ugoh. He's inconsistent, but the pass pro numbers actually improved my opinion on his performance this season (though Peyton's knee improving as the season went on may have something to do with it).

Ugoh has two years left on his rookie contract at cap hits of 941K and 1.1million