Albert Haynesworth using Colts to get Titans to pay him

Share All sharing options for: Albert Haynesworth using Colts to get Titans to pay him 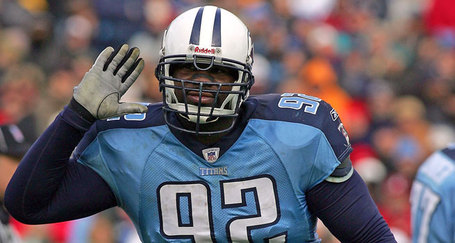 Albert Haynesworth will not be joining the Colts anytime soon. If he does, I might just shoot golden monkeys out of my butt and sing "I Feel Pretty" while prancing around Broadripple* in a tutu. And while some of you might very well enjoy the site of that, it is highly unlikely to happen.

Ok, check that. If the Colts win another Super Bowl, I might just get drunk enough to don the tutu. But, I digress...

Haynesworth is looking to become the highest paid defensive player in football. That honor is currently held by Dwight Freeney currently held by Jared Allen of the Vikings. Haynesworth wants Freeney-money, and he will likely get it. The problem is the Titans and Haynesworth seem far apart on the dollar amount. So, what does Albert do to leverage Jeff Fisher and Titans management?

Why, he says he wants to play for the Colts. That's what.

ESPN's NFL Live show had a clip of Haynesworth at the Pro Bowl talking about his pending free agency. He then said the Titans better sign him quick because... Albert then motions Robert Mathis to toss him a Colts helmet... because the team with the horseshoe logo looks like a team he would very much like to play for. Albert goes on to say the Colts are a great team because of Peyton, Reggie, and Dwight.

Collectively, Titans fans everywhere suffered mini-heart attacks at the thought of Albert Haynesworth as a Colt. 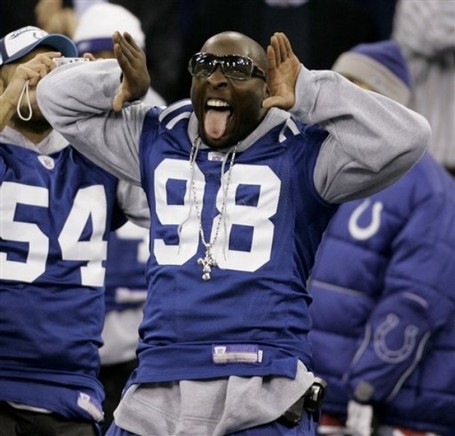 Robert Mathis's message to the Titans

I have no link as yet because ESPN doesn't have the clip up. Obviously, from a talent standpoint, adding Haynesworth would be a coup. He would immediately beef up a Colts line that needs stability at DT. In the last three years, they've lost DTs left and right for various reasons (injuries, retirement, illness, smoking weed, you name it). Just look at the names: Corey Simon, Booger McFarland, Montae Reagor, Ed Johnson, and Quinn Pitcock. That's a lot of money, draft picks, and effort at one position. Every single one of those guys is out of football.

What is neat to see is the best player on a rival team compliment our guys. Lord knows compliments from Titans fans are often few and far between. And I imagine it bothers them slightly that their best player would rather play for the Colts than their Titans. It's also fun to see guys like Peyton and Robert jokingly "recruiting" Haynesworth. And while his signing with the Colts is unlikely, if Haynesworth signs anywhere but Tennessee, the Titans are done. He was their best player in 2008, the lynch pin of their entire defense.

*For you none Hoosiers, Broadripple is an area of north side Indianapolis were former Frat guys drink beer to help them hang onto the memories from old college days, and underage girls flash fake IDs to try and hook up with these same ex-Frat guys. Because of this, pretty much everyone hangs out in Broadripple.

"But Albert deserves to have a great contract," Manning said. "I’d love for him to come to Indianapolis. If he doesn’t, I’d like him to leave the division … I’m getting tired of us having to triple team him to get him blocked. (Center) Jeff Saturday says it’s just a nightmare playing against him. So come to us, or go to the NFC."