It's probably a good thing we didn't do these reviews last season, or else we all would have said horrible, hurtful things that we could never take back about Charlie Johnson.

CJ wasn't just a solid guard he was competant at left tackle while Ugoh sat out 4 games (for whatever the reason was). Quite a turnaround from the most hated Colt since Mike Vanderjagt. 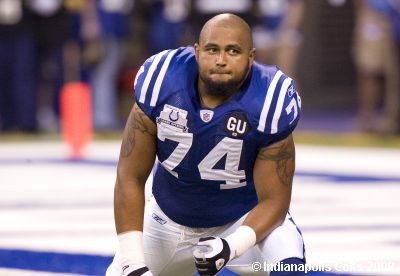 "Words can hurt, you know"

CJ was one of just 4 players to start all 16 games for the offense (CJ, Diem, Peyton, Wayne).

The Colts line ranked 23rd in adjusted line yards, 21st in power success, 32nd in runs of 10+ yards and in the brightest spot were the 13th least stuffed running game (stat definitions here). So the Colts running game was consistently sub par. They were far from explosive and were stuffed less than the average team, it was just mediocre gain after mediocre gain.

While the run blocking was far from spectacular, the pass protection was excellent despite Peyton's limited mobility early on. They gave up the 4th least total sacks and ranked first in FO's adjusted sack rate. Obviously some of that is Peyton's ability to read a defense and get the ball out quickly, in fact Indy has been top 2 in adjusted sack rate 7 of the last 8 years. Can anyone guess the year they didn't finish in the top 2? Highlight the gap below for the answer.

Charlie Johnson is now in a contract year. He'll count 550K towards the cap next season. If 2010 is uncapped CJ will be a restricted free agent, if a new CBA is negotiated in time and 2010 is a capped season, CJ will be a unrestricted FA.