Diem was one of just 4 players to start all 16 games for the offense, that's one of the few nice things I can say about him this season. They were mediocre running behind him and a disaster running wide to his side. 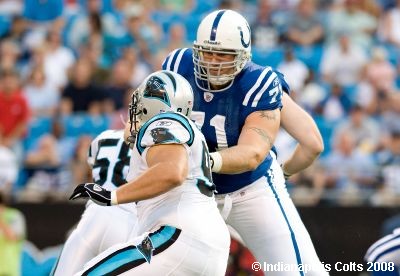 Diem is signed for another 3 seasons at cap hits of 6.1, 5.0 and 5.4 million. At least 7 million of that is signing bonus that will count on the cap even if he is released down the road.

With the disorder and inexperience on the line Diem's performance may not mean he's washed up, but the signs aren't good. Getting Ryan Lilja as opposed to a rookie next to him at guard, or moving back to his roots at guard (he played his first 2 seasons at RG) could have him producing enough to justify his contract, but Lilja's return is far from a sure thing (and may not cure what ills Diem). The draft is deep in tackles so if a good one drops to Indy they could grab him.

Diem's replacement may already be on the roster, after filling in admerably for Diem at RT for the second half of the superbowl, Charlie Johnson was seen as the RT of the future. His 2007 disaster killed those dreams, but a good season at guard and 4 games at LT without incident may have revived them.