Share All sharing options for: Free Agency 2009: So Colts fans, do you feel left out?

If you are a Redskins, Broncos, Patriots, or Chiefs fan today, you are buzzing. Hell, even if you are a Bucs or Eagles fan, you are (at the very least) fired up that your team was or wasn't able to make some moves. Within the past 48 hours, the landscape of the NFL has changed dramatically. Players that were mainstays (icons!) for one franchise have now left the teams they are associated with and signed with new ones. Albert Hayneswoth is a Redskin. Brian Dawkins is a Bronco. Mike Vrabel is a Chief. Ray Lewis may leave the Ravens, and Marvin Harrison is no longer a Colt. Hell, the Broncos actively tried to trade Jay friggin Cutler! And now that their trade plans have fallen through with Matt Cassell going to the Chiefs, the Broncos are in full damage control mode and dealing with a very pissed off Jay Cutler. WTF!

Up is down. Black is white. Welcome to the NFL off-season, rookie.

We've seen some truly fantastic player movement these last two days, and these changes will ripple through the current of the NFL in 2009. Take the Patriots, for example. Outside of Jerod Mayo, Mike Vrabel was New England's best linebacker. He could play multiple positions, and without his versatility, the Patriots defense is a joke. They trade him and their insurance policy at QB (Matt Cassel) to the Chiefs. In return, they get a 2nd round pick.

If you wanted an example of just how much great team managers value their draft picks, look no further than that. Two proven, veteran players (one only 26 years old, and a QB to boot) for one draft pick that isn't even a first rounder. Obviously, the trade helps both teams. The Patriots add a second round pick and remove $14 million from the cap (which they were desperate to do). The Chiefs get a QB to build around and a LBer who knows the defensive system they plan to implement.

Despite all the player movement, all the wheeling and dealing, all the money flying around left and right, quietly distant from the whole matter are Bill Polian and the Colts. They've spent the last week re-signing Kelvin Hayden, bidding goodbye to Marvin Harrison, and locking up Jeff Saturday just prior to the start of free agency. This is the Polian Doctrine. Free agency is something that the Colts rarely dabble in. The last big free agent they signed was Adam Vinatieri in 2006. Far too often, they've been burned by free agency (Corey Simon), and it has jaded Polian and his flock from ever seriously considering making a play at free agents.

Even though I know free agency is not the arena one uses to build a winner, I have to say, as a fan I feel a little left out of all the excitement.

Chiefs and Broncos fans are working themselves up into a frenzy, thinking their teams are trying to out play the other in a free agency war. Hell, the frenzy is so high the two teams might as well BE PLAYING RIGHT NOW. 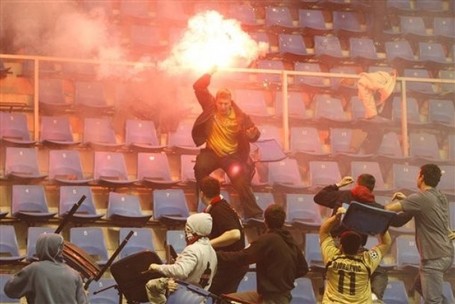 Chiefs and Broncos fans are already at it

Now, don't get me wrong, I am one of the biggest supporters of the Polian Doctrine. Free agency is not financially sound for most teams. There is a reason the Redskins have been totally and completely irrelevant under Daniel Snyder's reign in DC. Same with the Cowboys, and several other teams that spend a great deal on free agents.

Now, If you are a rebuilding team like the Broncos, Bucs, or Chiefs, getting your hands on some quality free agents makes sense. But, the team has to take care not to over spend. For the Colts, a 12 win team that is very close to getting back to the Super Bowl, overpaying and breaking their financial stability just to pick up some marginally decent players is not a formula for success.

Still, I can't help but feel a little left out of the free agency party. The draft cannot come soon enough.