So, why did Terrell Owens sign faster than Marvin Harrison did?

Please permit me to be the last to comment on the charade that is Terrell Owens signing a (snicker) one year deal with the Buffalo Bills. I felt the need to wait until all the Bills, Cowboys, and Eagles fans had their says first. Yeck, I figured the 49ers fans also had a few choice words for ole TO. For us Colts fans, TO signing anywhere outside the AFC South registers about a zero on the "We give a sh*t" radar.

Some suggested the Colts would sign Owens. Um, the Colts cut their best defensive tackle (Ed Johnson) last year two weeks into the season because he was caught smoking weed. I shudder to think what Bill Polian would do to TO the second he tried one of his media stunts. Can someone be stabbed to death with a Sharpie?

Anyway, the only possible reason I could think of to bring up the old and useless WR that is Terrell Owens is his connection to Marvin Harrison. Marvin is, of course, better than TO. I'm sure some would disagree with me, and those some probably thought stock in Citibank was a good idea a few months ago. Fact is Marvin catches the ball better, is faster, run better routes, wins more games, and is a better teammate. Both men were drafted in the same year (1996) and both men were cut from high profile teams this off-season; though the reasons for cutting both men were different. Marvin was cut because his salary cap hit would have been $13 million in 2009. The Colts worked to restructure his deal, like San Diego did with LaDanian Tomlinson, but both sides could not work anything out. As for TO, he was cut because he is an ass. It's the third time he's been dumped by a team because of his attitude. 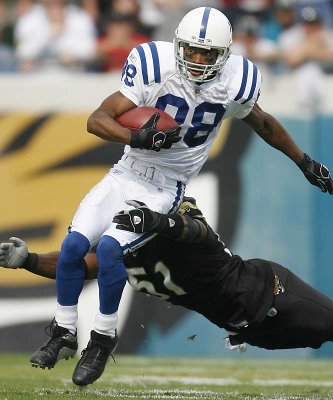 Yet, despite his cancerous presence in locker rooms and his over-rated skills, people still get excited talking about TO. It is a sad reminder that modern sports media (aka, ESPN) cares more about hype than accomplishment. And hype, along with the media attention it carries with it, is exactly why Terrell Owens has signed with a new team while Marvin Harrison waits it out as a free agent. BrianG at Buffalo Rumblings summed it up best:

Since when were the Buffalo Bills relevant in any way, shape or form on a national stage? It's been a very long while.  That all changed Saturday evening, when Owens stepped to the podium at One Bills Drive donning his red Bills cap.  The Buffalo Bills are no longer a league afterthought.  For the first time in roughly a decade, the Bills have real, undeniable star power on their roster.

It could not be spelled out any clearer. Buffalo signed TO because they want media attention. This signing had very little to do with winning games (because with Owens on your team, you won't win much) and more to do with getting cameras and reporters interested in Buffalo football. It's pathetic, I know. But when you are as sad as the Bills are, I guess you get desperate.

Look, I'm not saying this stuff to bash the Bills team or their fans. I like the Bills. I've liked them since 1991, when I watched my first Super Bowl. Loved that Giants game. But the sad fact is Buffalo has an old, incompetent owner (Ralph Wilson) who for the past few years has been bleeding money in Buffalo. He's made it clear he wants to move the team to Toronto. The Bills have been irrelevant since the late 1990s, and the main reason why is because the team has incompetent leadership from the top down. The reason why is because Wilson chased away two of the best personnel men in the business: Bill Polian and the late-John Butler.

The story with Polian boils down to Wilson firing him because he didn't like him. Marv Levy begged Wilson not to dump Bill following the 1992 season, but Wilson remained steadfast because he personally disliked Polian. John Butler replaced Polian, and the bills maintained a measure of success for a time. But, Butler left for a GM job with the San Deigo Chargers because of the QB controversy between Doug Flutie and Rob Johnson in 1999. When Butler left, he took Flutie with him. Sadly, Butler passed away in 2003. He was replaced by AJ Smith. 1999 was the last time Buffalo made the playoffs.

Since Polian and Butler left, it has been a circus of clowns running the Bills. Tom Donahoe, who replaced Butler, nearly destroyed the club after Butler left. The team had a brief reprisal (in terms of talent) a few years ago when Marv Levy came back to the club as the GM. He drafted Donte Whitner, Trent Edwards, Marshawn Lynch, Paul Posluszny, and several other players that make up the nucleus of the current Bills. But Levy was clearly not up for the rigors of the job, and left a few years later. Despite adding better players, the fact is the Bills have not played in a playoff game since 1999's Music City Miracle. They haven't won a playoff game since 1995. They haven't been relevant because the team is managed and owned by IDIOTS.

So, how to they stop this and make themselves "relevant" again? By bringing in Terrell Owens.

If Ralph Wilson and the Bills truly wanted to become relevant again, they'd have made a serious push at getting Scott Pioli to run their team, or tried to pry a young personnel guy like Marc Ross (Director of College Scouting) from the Giants. They would have fired Dick Jauron and hired a competent coach, like perhaps Todd Haley or Leslie Frazier. Instead, the same idiots who took a 5-2 start and ended it with a 2-7 finish are still running the Bills.

Oh, and they now have TO. Again, feel free to laugh.

This team didn't need an old, ass hat WR with a reputation for dropping key first downs and blaming it on his QB. It needs a leader in the front office! I personally have no sympathy for the Bills. I have sympathy and respect for their fans, but not the organization and certainly not the owner. Wilson fired very competent people because he didn't like them. Seriously, WTF is that? Only a spoiled, rich prick like Wilson would think that firing people because he didn't get along with them was somehow a smart business practice. Folks, I work with people I personally dislike all the time. We all do! Hell, there are several SB Nation writers I simply cannot stand, but the fact of the matter is many of those guys I do not like are very, very good writers. And if I were in charge of SB Nation (and thank Christ on the cross I'm not), I wouldn't fire those guys because we don't like each other personally. That would be moronic!

I'm sure my boss right now is reading this, and I'm sure he is pretty upset that I am writing about other SB Nation writers and not painting them in a perfect light. But a big reason why my boss is making money during a recession while Ralph Wilson is bleeding cash is because my boss does not fire competent people just because he doesn't like them. 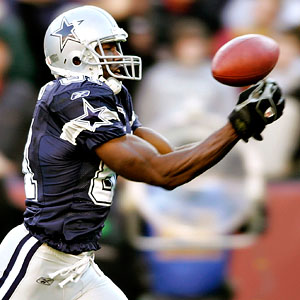 So, what does all this have to do with Marvin Harrison? I'm sure you are asking yourself that. Or, maybe you are wondering why a Colts writer is ranting about Ralph friggin Wilson and his cast of dumbos in Buffalo. Well, the reason is thus: Terrell Owens is a media created player. As far as on-the-field accomplishments go, he has done very little to help the teams he has played for win games. Terrell Owens has only played in four playoff games since 2002, losing three of them. He did not play in the playoff games that got Philly to the Super Bowl in 2004, and despite his very much hyped presence in Dallas, he did not help them win a single playoff game.

Yet, despite not doing much to help his teams win on the field, what kept Owens "relevant" were his antics off the field. All of this was fueled by networks like ESPN, who cared more about what TO would do after a TD than they did to the actual game results. ESPN made a conscious network decision to cover TO 24 hours a day because his prancing around garnered attention. What he did on the field was meaningless. What ESPN cared about were the TO rumors that he was unhappy with so-and-so. Where TO goes, ESPN follows. And the reason Buffalo signed TO had little to do with him helping them win and more to do with having Ed Werder camped out at their complex 365 days a year, covering the Bills and TO.

Contrast this with Harrison who, even at 36, is still a better player than Owens. He runs better routes, is still faster, and can catch the ball in the clutch. Marvin Harrison is arguably the greatest WR of his generation, but ESPN barely gave his release a mention. He is part of the best QB to WR duo in NFL history. He's won a Super Bowl. He is second to Jerry Rice in a number of key WR statistics, and he's climbed the charts much faster than Rice did. Yet, no team has signed him because he doesn't bring with him any hype. In fact, the only time ESPN ever gave a crap about Marvin Harrison was when people made up a bunch a bunk about him shooting some dude in a hand outside a bar last year.

This is the sad state of traditional media, boys and girls. And this is why I blog. Marvin Harrison will likely sign with someone. It may likely be Philadelphia, Owens' old team. And when he does sign with someone, he will help them win a helluva lot more games than TO will ever do in Buffalo. Yet, TO will get more attention from the ESPNs of this world. So, for all the times we get annoyed that TO is in the news again, it is important to remember that TO is in the news because the news itself wants him there. Meanwhile, better, more accomplished players like Marvin Harrison and the soon-to-be-released Torry Holt are after thoughts. All these guys did was score TDs, pass the ball to the ref, and win Super Bowls.