Road to the Draft: Defensive Backs

Share All sharing options for: Road to the Draft: Defensive Backs

By request, I will do the defensive backs now.  Personally, I think the defensive backs are fine, but in a lot of mocks I have seen the Colts taking corners in round 1.  Interesting to say the least.  With one of the top pass defenses in the league even though half of the corners were on IR, I am content.  However, nothing is perfect for Bill Polian.  Even though we will see a great competition in training camp between Marlin Jackson, Kelvin Hayden, Tim Jennings, TJ Rushing, Michael Coe, (maybe) Keiwan Ratliff, Nick Graham, Brandon Foster, Brandon Sumrall and Dante Hughes for four or five spots at corner while Bob Sanders, Antoine Bethea, Melvin Bullitt, Brannon Condren, Jamie Silva, Travis Key (don't know when this guy came aboard) and maybe Matt Giordano go for four safety spots, the Colts may draft one or two defensive backs.  However, I do not see this being a huge need for the Colts.  Here are some players that could be a target for the Colts.

Alphonso Smith/CB/Wake Forest: This is the guy that people have the Colts taking in the first round.  The Colts actually have made contact with him, but that was before Kelvin Hayden was resigned.  I would wait to see if there is any contact now that the best corner on the team is coming back.  Smith is a very good corner who is projected to go in the early second round.  He is short but very fast.  The concerning thing about him is his lack of tackling abilities.  I don't want another Tim Jennings on the team.  I would be distressed if they took Smith at #27.

Michael Hamlin/SS/Clemson: Hamlin had contact with the Colts at his all-star game.  He is definitely a run stopper.  He had 326 tackles at Clemson, which is great for a defensive back.  The problem is that he does not play pass coverage well at all.  Hamlin is projected to go at the bottom of the second, but I don't think the Colts would take him unless if they would move him to linebacker.  He's 6-3, 206 pounds and he has good agility.  However, the Colts need good pass defenders as linebackers.  Unless his stock plummets to the fourth or fifth round, he should not be taken.

Chip Vaughn/SS/Wake Forest: This guy's scouting report is a lot like Hamlin's.  He is a great run stopper but doesn't play well against the pass.  The difference is that he is projected to go in the late third round and is faster.  He could be an option in the draft if the Colts would take him as a linebacker.  Hey, it worked for Cato June. 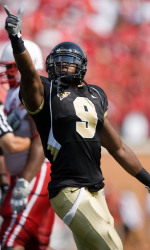 David Bruton/FS/Notre Dame: I love David Bruton.  He went to Notre Dame and that is a large part of the reason why, but he also is the best special teams player in this draft.  Notre Dame had one of the best special teams in the country last year because of Brian Polian, a Rudy-esque walk-on and David Bruton.  As a safety, I wouldn't take him because of his stiff hips, but he could be amazing as a Tampa-2 linebacker.  He ran an official 4.46 forty at the Combine, where time slowed and fast players ran 40s .2 seconds slower than usual.  He is around 6-2, 220 pounds.  Bulking up wouldn't hurt him, but he is great at stopping the run.  I'm sure Brian is in Bill's ear telling him about Bruton.  If the Colts take him, Polian will know every positive about him. 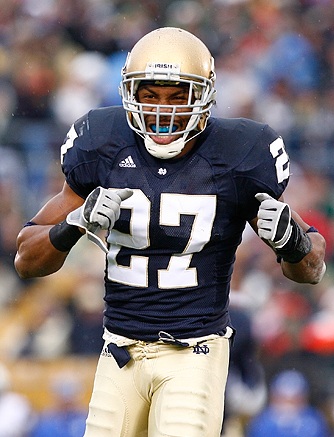 These four have all been in contact with the Colts at some point.  They have talked to only one corner, which is not surprising.  However, the trend of scouting safeties that aren't great in pass coverage is interesting.  Will they draft someone and convert them to linebacker or are they going for a different type of safety?  Michael Hamlin has been compared to Roy Williams, which scares me.  Bruton would be my pick out of these four, but I am a homer as my screen name implies.