Who The Hell Will They Draft 2009: Penn State WR Derrick Williams

Share All sharing options for: Who The Hell Will They Draft 2009: Penn State WR Derrick Williams

We kick-off our WTHWTD 2009 coverage with a position the Colts have a long history of drafting in the first round: Wide Receiver. Contrary to what many hear want, the fact remains that the WR position is weaker than it was last year, and this Colts team is built around its offense. Debate all you want about running the football, but you win in this league throwing the ball. Look no further than the two teams who played in the Super Bowl. Both had mediocre running games, and both beat very good running teams on their way to Tampa Bay. For the Colts, while fixing the running game and shoring up the interior of the d-line are important, nothing is more important than giving Peyton Manning as many weapons as possible.

When you give the best QB in football (and the 2008 NFL MVP) weapons, you tend to win games; lots and lots of games.

So, after establishing all that, the first WR we are going to profile is Penn State's Derrick Williams, a player who might be the most under-rated first round prospect. 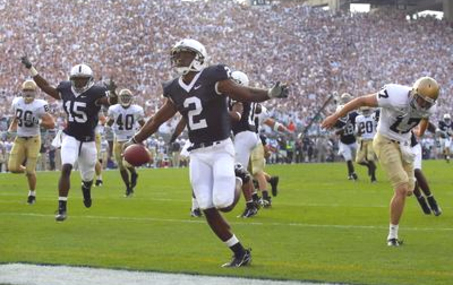 This picture is inserted to make mgrex03 cry, cry, and cry some more

Guys like Percy Harvin and Kenny Britt are getting a lot of chatter because of their Pro Day and Combine performances. However, flying under the radar (or as under the radar as a first day prospect can get) is Derrick Williams. Williams' school, Penn State, was no joke in 2008. They were serious contenders for the National Championship, and spent a majority of the season dominating the Big Ten. One reason they were so affective was Williams, who posted 44 receptions for 485 yards and 4 TDs. Those are not eye-popping, OMG he's Jesus numbers, but they are solid.

However, as solid as his Senior season was, it wasn't until the Senior Bowl that people started taking notice of Williams. He led the game in all-purpose yardage (124 yards) by catching, rushing, and returning kicks. Indeed, after the Senior Bowl, Mocking the Draft took time to note Williams' dominant presence in Mobile, AL:

Derrick Williams, WR, Penn State: With the glut of junior receivers coming out, Williams had to prove himself and he did. Outside of good height, Williams displayed everything a team could look for in a receiver. He could slip into the early second round based on his performance in Mobile.

Now, Mocking Dan at MTD statement of "early second round" was made prior to Williams' Combine performance or his Pro Day performance. Oh, and before we get yet another dumb "The Combine and Pro Day stuff is meaningless" comment, I will kindly point the anti-Combine people to this article and ask them to STFU now. While the Combine is not the be-all-and-end-all in determining the "value" of a draft prospect, the fact of the matter is if you perform well at the Combine, chances are you will become a pretty good player. And if Combine performance coupled with solid college production translate into a promising pro career, then Derrick Williams is as much on track with his as any other WR prospect in this draft.

Williams performed well in Combine drills, but did run a "slow" 40-yard dash with a 4.58 timed speed. However, many allegations have come out post-Combine that the timing clocks were off. More fuel was added to this fire when Derrick Williams posted a 4.37 timed speed at his Pro Day, impressing many scouts in attendance.

At 6'0, 194 pounds, Williams is exactly the kind of WR the Colts like. As you will often hear me say in several draft profiles, height is one of the most over-rated "traits" people factor in when it comes to evaluating a player. Marvin Harrison is 6'0, and he's the greatest WR not named Jerry Rice (who was also 6'0). So, when I hear these idiots yack about how "tall" a WR is, I just ignore it. Tall receivers tend to lack a low center of gravity. They tend to run sloppy routes, and lack quickness. Again, this is in general. And a WR who cannot run a clean, precise route is a garbage WR. A WR without quickness and speed is a limited player. Guys like Keyshawn Johnson, Matt Jones, Buster Davis, and pretty much every WR drafted by the Detroit Lions (sans Calvin Johnson) all fit the "he's tall, let's draft him!" category. Meanwhile, the Marvin Harrisons, Torry Holts, Issac Bruces, Hines Wards, and Steve Smiths of this league dominate the WR position.

From Mocking the Draft:

Strengths: An excellent athlete with incredible speed and agility. Top-notch change-direction ability. Much like DeSean Jackson, Williams can break a play open at any time. Dangerous after the catch. Decent hands, even though he sometimes catches passes in his body. Intelligent player who has played several different positions. Quick off the snap. A competitive player who became one of Penn State’s team captains as a senior.

Uses moves and his hands to get off press coverage. Lines up in the slot and outside. Finds holes in the end zone and presents a target. Typically solid hands, catching the ball away from his frame. Cognizant of the sidelines, can tightrope or tiptoe to stay in-bounds. Good hands on returns, catching punts over his shoulder if necessary. Retains the catch after a big hit. Excellent straight-line speed and quickness, able to make the first defender miss. Takes direct snaps and handoffs, and is willing to run tough inside. Shows nice vision and toughness after the catch, as a returner and getting the occasional carry as a running back. Very willing blocker downfield, using his strength, good angles and sound technique to keep safeties and corners out of the play. Team captain as a senior, vocal leader in practice and during games. Deflects credit to his teammates after big games. Stayed positive leader while not putting up huge numbers.

The character traits that NFL.com cites are important because the colts are very big into drafting high character people. While his numbers at Penn State were not insane, he didn't point fingers at the QB, offensive coordinator, or complain that he wasn't getting the football enough. Williams is also a willing and able blocker; a must in an offense that utilizes stretch run plays and selling the defense on play action fakes.

The intriguing punting and kicking abilities Williams has displayed are also worth noting. The Colts were dead last in punt and kick returns in 2008, and while Pierre Garcon is solid prospect, the fact of the matter is Williams is a better receiver and returner than Garcon right now. And like Garcon, Williams has loads of upside. 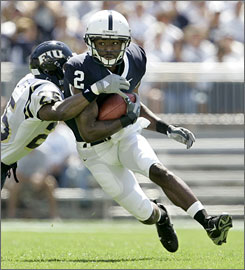 Derrick Williams is very good getting YAC (yards after catch)

So, what are the negatives?

Became something of a gadget player who caught and ran the ball and played special teams. Isn’t the best route runner and doesn’t seem to like going over the middle to make difficult catches. Bulk is something of a concern. Has had some minor injury concerns throughout his career.

Will drop too many catchable balls...Durability might be a concern...Has room to improve as a route runner...Very inconsistent...Was not overly productive and might be somewhat of an underachiever...Jack-of-all-Trades, a master of none?

Is not have the short-area quickness or elusiveness as most of the top NFL returners. Needs to work a bit on his footwork coming in and out of routes. Does not always separate from defenders as his timed speed would indicate. Concentration lapses occasionally when trying to make a move after the catch.

All these negatives are a big cause for alarm. WRs that can't run precise routes and can't consistently catch the friggin' ball (which is, you know, what WRs are paid to do) just aren't worth the time of day. I don't care how fast, tall, or "bulky" the dude is. Run and catch is the WR's game. If he can't do both, he sucks. End of story.

Typically, the Colts avoid players with "catching" issues. As the story goes, many year ago Bill Polian once told his scouts he didn't want to see any reports on players who couldn't catch. Their speed, height, and upside were meaningless if they couldn't catch. He said (paraphrasing), We have the best quarterback on the planet. Why would we give him someone who can't catch his perfect passes? This is why Polian drafted players like Reggie Wayne and Anthony Gonzalez. These guys catch EVERYTHING thrown at them, and if you want to make it as a Colts WR, you better catch everything thrown at you, because if you don't the "P Man" will stop looking your way, and you'll soon be bagging his groceries instead of hauling in his TDs.

Williams is slotted as a second round pick, but do not be surprise if Indy snatches him in round one, especially if many of the other WR prospects are gone. Derrick Williams' attitude, speed, and leadership make him a solid fit for Indy's offense. And he is very much on Bill Polian's radar. That much is certain.