Who The Hell Will They Draft 2009: Mississippi DT Peria Jerry

Share All sharing options for: Who The Hell Will They Draft 2009: Mississippi DT Peria Jerry

How does a team with 2 Pro Bowl defensive ends finish dead center of the league in sacks?

Every single one of the 30 sacks by the 2008 Colts was by a player that played DE either exclusively or regularly, (Mathis, Freeney, Brock, Reid, Curtis Johnson, Marcus Howard).

The DT-DE hybrids, Brock and Reid combined for just 5.5 sacks. That was the extent of the Colts interior pass rush. Without a big penetrating DT to draw attention away from them Indy's small quick UTs were swallowed up by opposing interiors. Indy has repeatedly tried and often had temporary success in adding a big pass rushing DT to the defense. Indy's best defenses of the Manning era have come with a great big DT, 2005 (Simon), 2006 playoffs (McFarland) and 2007 (Ed Johnson). Indy's D struggled without one in 2006 (until McFarland learned and adjusted to the defense) and 2008.

Peria Jerry is exactly the kind of DT Indy needs in the nose/over-tackle spot. 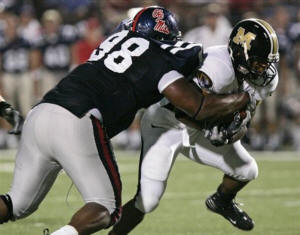 As a senior Jerry was 4 time SEC defensive player of the week on his way to first team all-SEC (and all-American), with 6 sacks and a conference leading 18 tackles for loss. The previous year (his first as a full time DT) Jerry was 2nd team all-SEC with 3.5 sacks and 14 tackles for a loss. Jerry gets into the backfield. He's been one of the most disruptive defenders in college football the last two seasons with 9.5 sacks and 32 TFL combined.

Is Jerry a Colts type player? Mocking Dan, what do you think?

There may be no better fit in the draft than Jerry going to the Colts. He's an ideal penetrating defensive tackle.

"LISTEN TO YOUR (EXPLETIVE) COACHES!" Peria Jerry screamed at his teammates.

He stood at the center of 80-odd Ole Miss football players during a preseason practice in August, his eyes wild, his jersey sweat-soaked, his authority unquestioned. Even his coach, Houston Nutt, seemed taken aback by the fire that spewed from his mouth. But Jerry, a senior defensive tackle, had seen too much and come too far to sit back and allow the season -- his final season -- to crumble around him.

"When the coach stands up to talk, man, everybody should be quiet," Jerry says. "You could hear people in the back bickering. And that was just a time for me to step up and let them know, 'Man, don't go like that. Have some respect."

The scouting reports also praise his work ethic and character

Jerry is a defensive tackle who plays a lot like an end. He has a great burst off the line, reminiscent to Sedrick Ellis of the New Orleans Saints. Uses his quickness to get inside guards to beat blocks and get into the backfield. Adequate lower body strength to take up double teams. A hard worker who will play down the field until the whistle. Has quick hands to work off double teams. Has also played defensive end. Had 33 tackles for a loss and 11.5 sacks his last two years.

The Sports Xchange (via NFL.com)

Positives: Quick, active three-technique tackle. ... Good height and adequate girth inside. ... Very quick off the snap, able to beat the down block by tackles or penetrate to force the quarterback to rush his decision. ... Gets his hands inside guards' jerseys to push the pocket. ... Chases downfield on plays away from him, and works hard to make a tackle when the ball is in his area. ... Uses his hands well to defeat cut blocks inside. ... Handles double-teams pretty well when playing the nose considering his height, and is able to get off the double to get to the ball. ... Emerged as the unquestioned leader of the Ole Miss defensive line. ... Dominant week at the Senior Bowl. ... Good bloodlines. ... Cousins Eddie Strong and Dwayne Rudd both played linebacker in the NFL. 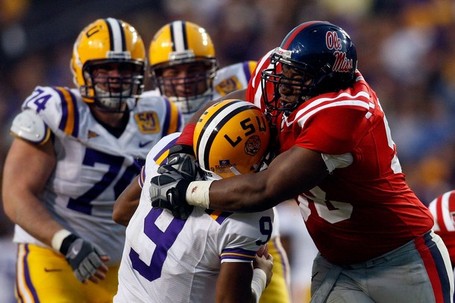 Needs to get stronger to hold up better against the run. Gets too tall in his stance at times, allowing linemen to cut under and him control him. Injury concerns are concerning. Had arthroscopic knee surgery prior to the 2008 season. Missed spring practice in 2007 after undergoing foot surgery. Will be a 25-year-old rookie.

The Sports Xchange (via NFL.com)

Makes a lot of plays when slanting toward the action. ... Needs to play stronger at the point against the run. ... Can play a bit high in rushing situations, causing him to lose the leverage battle. ... Lacks great awareness, as he does not keep his eyes in the backfield. ... Takes himself out of plays too often. ... Needs to stay on his feet against stronger linemen. ... Low test score. ... May struggle with a complicated playbook.

Does not have great size or bulk...Frame is awfully close to being maxed out...Not very strong or powerful...Isn't real stout at the point of attack...Has to be more consistent with his leverage...Can get pushed around in the run game...Struggled in the classroom and intelligence may be an issue...Older than the average prospect...Will not be a good fit for every team...Has some major durability concerns.

Can't get much bigger and does not carry weight well; can still improve upper body strength a bit ... Not versatile at nose tackle, 1-technique, or 5-technique ... Struggles against bigger linemen ... Overwhelmed against run occasionally ... Injury history.

Jerry isn't a huge DT and likely can't get much bigger. He can't play in a ton of different schemes and isn't a top run defender. None of those are major issues for Indy. He's more than big enough for Indy's scheme, which is one of the schemes he fits and he's a significantly better run defender than the 260lb DTs he'd be taking NT snaps from.

The concerns for Indy are the 06/07 injuries (but he's been healthy for almost the whole last two years) and that he's one of the oldest players in the draft (turns 25 in August).

Unfortunately there's a good chance Jerry doesn't drop to Indy, but he's by far my first choice of prospects who would be realisticly available to Indy at #27.