Who The Hell Will They Draft 2009: DT Ron Brace

Share All sharing options for: Who The Hell Will They Draft 2009: DT Ron Brace

This is my second WTHWTD and the fourth overall.  The others that have been done are wide receivers Derrick Williams and Hakeem Nicks and defensive tackle Peria Jerry.  All of those guys are big names, and I am not planning on changing this.  This profile is on a big defensive tackle from Boston College named Ron Brace. 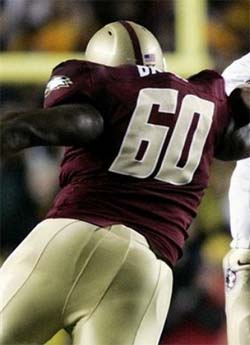 Some version of this picture is seven of the top ten results on google images for Ron Brace.

Ron Brace played alongside BJ Raji, another huge defensive tackle who went number two in the Stampede Blue mock draft and is a definite top ten pick.  Raji is 325 pounds, but Brace has him beat by a mere 16 ounces.  Brace is a big man to say the least.  If you are thinking that the Colts won't take him because he is the size of twenty Keyunta Dawsons, you are wrong.  The Colts have already made contact with Big Ron.  Polian is certainly interested in Brace.

As is custom, it is time to look at the scouting report from Mocking the Draft.  I'll start with the positives.

Strengths: Brace possesses the size of a two-gap plugger, but the quickness to of a one-gap tackle. He uses that size and quickness to stuff the run nicely. He has a powerful base and is hard to move around. Because of that, running backs have to adjust where they're going or run right into Brace. Strong against the double team. During the 2008 season, Brace would regularly take up two blockers so teammate B.J. Raji could burst into the backfield. Uses his power to collapse the interior of the pocket. Good agility, which allows him to slide down the line really well.

These are great positives.  I love the combination of size and speed.  He seems like a 3-4 NT stuck in a Tampa-2 NT's body.  This scouting report makes it seem like he helped BJ Raji become the top ten pick he is, which is why his stats aren't too impressive (27 tackles as a senior).  If he can do the same in the pros, maybe we will get sacks from people like Eric Foster.  Brace could end up making a defensive line with Robert Mathis and Dwight Freeney even more terrifying for QBs.

However, Brace isn't perfect and has some glaring negatives.

Weaknesses: Not especially productive. Had only 27 tackles as a senior, which is just over two a game. Really not a factor rushing the pass unless he can push a blocker back or gets an open lane. Some questions about his durability due to recurring back ailment in 2008. Pursuit and effort are lacking at times. Doesn't always fight hard to get through double teams. Inconsistent with his technique. Will get too upright at times negating his his strength.

The production is a little bit of a concern, but I mentioned above that he ended up opening wholes for Raji, turning BJ into a top ten pick.  I also don't think the Colts would draft him as a pass rusher, so that wouldn't be a big issue.  If he creates holes for Keyunta Dawson, Eric Foster or Raheem Brock, he would be a silent factor in the pass rush anyways.  The back ailment is what scares me.  The Colts have injury problems all across the board, and spending a first round pick on an injury-prone player may be a huge risk.  However, he has some great positives.

I am a fan of Brace.  I hate Boston College with a passion, but Brace has impressed me.  I like this interview he did for our Miami Dolphins blog here at SB Nation The Phinsider.  Here is my favorite part: his view of his positives.

"I’m quick off the snap. I’ve got a nasty bull-rush. I can occupy multiple linemen and collapse the pocket. I feel that you can always get better at anything, so I’m a guy who’s going to keep working on my craft."

I know some people have been questioning Hakeem Nicks' work ethic because he put on some significant weight, but they can't say the same thing about Ron Brace.  I know words are words, but he wasn't asked specifically about his work ethic.  If he can live up to his word, he can be amazing.

If Peria Jerry and Hakeem Nicks are off the board, I would like to see Brace in a Colts uniform next year.  Who knows, maybe some of you will be wearing this jersey at the home opener next season. 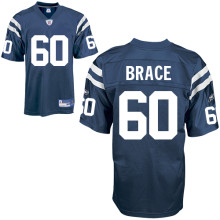