25 years ago today, the Colts moved to Indianapolis

Share All sharing options for: 25 years ago today, the Colts moved to Indianapolis 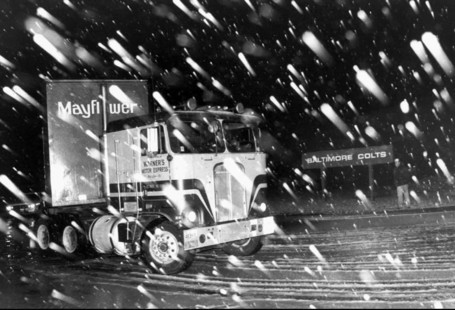 Photo: weblogs.baltimoresun.com
The image above is burned into the collective memory of most citizens of Baltimore. Heck, simply show them a picture of a Mayflower moving truck and the thoughts of most Baltimore's citizens will not focus on moving furniture or changing addresses. Rather, their knuckles will turn white as their minds are forced back in time, 25 years ago today, when their beloved football team packed up town and left, in the dead of night, bound for Indianapolis.
Travel about 600 miles west, and you will get the exact opposite reaction when March 29, 1984 is mentioned. For the city of Indianapolis, a new era was born when a well-established, history-rich football team decided to up their stakes in Baltimore and set down their roots in Indy. When the Colts arrived, it signaled to many that Indianapolis was no longer content with being the "crossroads" on the way to Chicago, St. Louis, Cleveland, or Cincinnati. Indy was now on the map, and the Colts helped put them there.
Just like 18to88, I don't think it wrong to celebrate the 25th anniversary of the Colts leaving Baltimore. People from Baltimore might moan and whine and cry, but to do so only highlights the reason why the Colts left in the first place. In the end, everyone got what they wanted. Indianapolis got a football team to build their city around. Baltimore lost all moral standing when they stole an even more history rich team from another city: The Browns from Cleveland. Then, ten years ago this year, Cleveland got their team back after being awarded an expansion franchise.
All three cities got a team. Happy ending. If anyone is still crying about it, they need to get a life. Sorry, but it's just that simple.

We'll be writing more about the 25th Anniversary of the Colts in Indianapolis as the day goes on, and articles will likely spill into tomorrow as well.