Who The Hell Will They Draft 2009: Oklahoma OG Duke Robinson

Share All sharing options for: Who The Hell Will They Draft 2009: Oklahoma OG Duke Robinson

A guard? A guard?! A GUARD?!!?!?!!? You can't be serious can you? I mean are you seriously proposing that the Colts take a guard with their first pick? Yes, my friend, that is exactly what I am proposing, and here is why:

Common wisdom is that you take the best available player regardless of position needs. I feel that this is for the most part true, but I have always viewed it as a hybrid of the two; you consider needs, but differ to the best player. In the case of guard, when the Colts pick at 27th the best player on the board will be a guard AND it will fulfill a need. So, who is this "best player" who is a guard late in the 1st round?

Duke Robinson from Oklahoma (and direct relative of the famous "Smokey Robinson) is a beast. 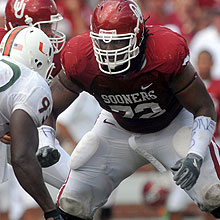 Robinson is big (330lbs), strong, tough, durable (never misses games), athletic and quick (5.27 40 time) . He is one of the best offensive linemen to come out of the draft in a long time. He was the anchor and the rock of one of the most prolific offenses in college football history. On top of his superb run blocking he also has excellent pass blocking skills and intelligence because he was part of a pro style offense at Oklahoma. On top of all that he is actually pretty darn quick and can pull well. A 5.27 40 time is very good for a guard.

Perfectly sized for a guard, Robinson has the power to engulf defenders one-on-one. Quickly gets into his stance to block in-line on running plays. Does a nice job keeping his feet moving and repositioning himself. An excellent and scary drive blocker. Incredible lower body strength. Typically plays with good leverage keeping a low pad level. Gets good knee bend.

Can generate movement at the point of attack in short-yardage situations. ... Plays with some nastiness and has the raw power to turn and pancake his opponent. ... Quick, strong hand punch to jolt the defender in pass protection. ... Natural knee-bender who plays with good leverage and balance in pass pro. ... Long arms and strong hands to keep the defender at bay.

Well, first it all, start up front with your offense. A strong o-line helps both your passing game and running game. It is the foundation upon which everything else is built around. Your WR's and QB might be All Pro, but if they don't have adequate time then your play book is going to be severely limited to three step drops and screens like it was for the Colts late last year. Therefore, getting Duke Robinson helps all these areas. He would help both immediately and into the future because he has Pro Bowl potential written all over him and could play in this league for eight plus years. Guys like Robinson can potentially help teams both short term and long term, which is extremely rare to find. They are literally the "gems" of every draft class. Also, factor in that the interior of the Colts line is a big problem right now. We don't know if Ryan Lilja is coming back and Saturday isn't growing any younger. Robinson can start immediately for the Colts and he can be groomed to be Saturday's replacement at center. Getting him instantly upgrades our entire offense.

I know this is not a "sexy" pick, but it is a very sound one. I know WR and DT are the "sexier" picks, but that doesn't mean they are the better ones. With WR's you have to remember it takes 2-4 years to develop those guys so they won't help much, if it all, in the short term. The Colts have the potential to win now so should we not draft players that can help us now? Hall and Garcon already know the playbook and we spent draft picks on them so I say we give them a chance to prove themselves as the #3 WR. Besides passing wasn't our problem last year; our problem was running the ball and the interior of our Offensive Line. Duke Robinson
addresses both of those problems simulataneously. As for DT I really don't think there will be any 1st round DT's at our pick, but we can find talent in rounds 3-5.

For any power running team, Robinson is about as good of a guard prospect as there has been in several years. His play is similar to that of Ben Grubbs. Where he struggles most is against quick, gap-shooting defensive tackles who like to get after the quarterback.

Can be a bit inconsistent...Not a great technician...Isn't real light on his feet...Has lapses in concentration...Poor balance...Will get caught reaching at times...Will have some trouble with quicker defensive tackles...Work ethic has been questioned and tends to skate by on his natural ability...Little  immature...Won't be an  ideal fit for every team.

Only marginal balance and lateral quickness to block at the second level, and spends too much time on the ground when trying to block on the move. ... Lack of great quickness shows in pass protection, as he struggles to adjust if his initial punch doesn't slow the defender

I have thought long and hard about this because I am usually of the mindset of not drafting guards until rounds 4-7, but its not unheard of to use a late 1st rounder. The Ravens did it last year and Ozzie Newsome is a very bright GM. I just feel that Duke Robinson addresses so many areas of need for us in addition to being one of the most athletic and talented players in this draft. Besides what is better than being big? Well being big AND athletic... just look. 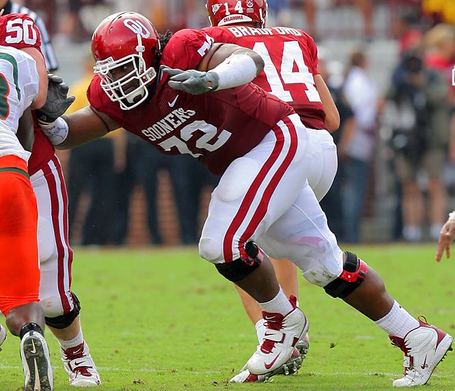