Who The Hell Will They Draft 2009: Iowa DT Mitch King

Share All sharing options for: Who The Hell Will They Draft 2009: Iowa DT Mitch King

Far from a pure homer pick, King is a disruptive undertackle who most teams have limited interest in because of his size. Many places have him as a 3rd round pick, but unfortunately for King he may be in a for a Marcus Howard-esque drop (remember Howard was projected as a 3rd-4th round pick. He fell to Indy at the end of the 5th). King would fall for the same reason. The vast majority of teams that would draft him, would require a position change. At 6'2" 280, without a lot of room to add weight (he came to Iowa as a 230lb linebacker) he's a 4-3 DE or 3-4 OLB for most teams. Moving a four year starter (and two time all-BIg Ten) at defensive tackle out of position isn't going to appeal to a lot of teams, just like a 280lb DT doesn't. 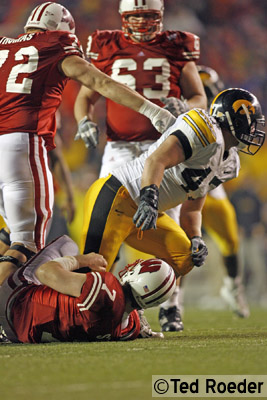 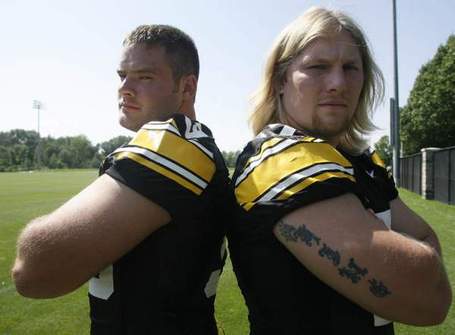 Short, squatty defender with a low center of gravity, making it tough to move him off the line of scrimmage. ... Good strength, especially in his lower body, to anchor. ... Good initial quickness off the snap. ... Good hand placement and quickness. ... Forceful hands to disengage from the blocker. ... Good short-area vertical and lateral quickness to slip blocks and make plays in the hole. ... Instinctive defender who sees the action and puts himself in position to make plays. ... High-effort, high-intensity player who makes those around him better. ... Four-year starter.

King was an extremly disruptive 3-techinque DT for Iowa's cover 2. He rushed the passer and got into the backfield against the run regularly (52.5 career tackles for loss). He's undersized for the Pros, but was a strong run defender in college.

Bit of a "tweener." ... Lacks the height, flexibility and speed off the edge teams prefer outside at defensive end and the bulk inside for defensive tackle. ... Needs to be protected by a bigger defensive tackle next to him to handle playing inside in the NFL.

He's not as big as other teams would like and doesn't have the athletism of a great edge rusher.

Mitch King from Iowa was amazing off the snap in not only one-on-one drills but in the scrimmage portion too. He is so good with his hands that he blew away almost every guard who tried to block him. The problem for King is the he is a man caught in between DT and DE. He is much shorter than teams would like at DE and not heavy enough to be a starting DT right now. However, his pass rushing simply can't be ignored.

King would be a perfect fit in Indy, where he can stay at the position he's dominated for the last 4 years. He'll be a possibility in the 3rd and passing on him if he falls to the 4th would be almost unforgivable (unless he falls to their 5th rounder like Howard did).