I don't want Edgerrin James back in Indy

Share All sharing options for: I don't want Edgerrin James back in Indy 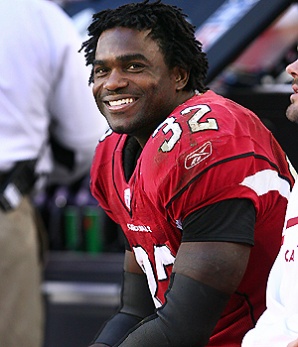 Edgerrin James is one of my favorite all time Colts. He is also just a super guy, and the Cardinals trip to the Super Bowl really reinforced what many of us already knew about him. In the game itself, Edge seemed to carry the Cardinals offense much of the first half. Then, Kurt Warner threw a horrible INT that was returned for a touchdown, and while the game was close in the second half, Arizona never really fully recovered from that mistake on Warner's part. They also abandoned the run in the second half with Edge, which was so very effective in the first half.

Regardless, it was fun seeing Edge be Edge in the biggest game of his life. Now, with coaches and players jumping ship from the SS Ken Whisenhunt, news from the desert says Edgerrin is pleading that the Cards release him (Tip to Piojocuau). Can't say I blame him. The Cardinals seemed to have their 15 minutes of fame, and now the roster purge will commence because their owner is a clueless buffoon. I don't say this to insult cgolden or the Cards fans at Revenge of the Birds. I'm just stating what everyone else knows, but is a bit reluctant to say because the Cards were just in the Super Bowl.

And if the Cards choose to release Edgerrin James, I do not want him to return to the Colts.

I know a lot of us in our fan community want Edge to return. We want to see Mike Hart surrender #32 to to the man with gold teeth and a gliding style of running that has placed him 11th all-time on the NFL's rushing list, ahead of Franco Harris, Thurman Thomas, and John Riggins (all inferior players to Edge; yes, I said it, and it IS the truth). But the reality is Edgerrin does not give the Colts anything that they don't already have. A healthy Joseph Addai is better than Edge. A healthy Dominic Rhodes is better than Edge. Hell, a healthy Lance Ball is probably better than Edge.

The best back in Colts history is 30 years old, and while he is in excellent shape and takes very good care of himself, sooner or later the tires on that mustang are going to go. It is already happening to Tomlinson, who is a year younger than Edge, and also an inferior player.

I'm a firm believer in change, both in the real world and in this little micro-world we call the NFL. Rosters change all the time. On the Colts defense, only Robert Mathis, Dwight Freeney, Bob Sanders, Gary Brackett, and Antoine Bethea are starting holdovers from the defense that won the Super Bowl just two years ago. On offense (in particular the offensive line) gone are Tarik Glenn, Jake Scott, Marvin Harrison, Ben Utecht, and Brandon Stokley. Last year, Ryan Lilja did not play at all, and his career is in jeopardy. As a result, three offensive linemen were drafted in 2008, and guys who had always been tagged as back-ups (Charlie Johnson and Dan Federkiel) were regular starters on the line. Hunter Smith, one of the best punters in the league and a long tenured member of this club, is now gone.

That is an awful lot of change folks.

And yet, the team still wins. Sure, the last two years have been disappointing, losing in the first round twice to San Diego. But, in general, this team has hummed along and stayed very competitive despite a massive roster turnover. Where teams like Pittsburgh had to, essentially, tank in order to purge their roster (they missed the playoffs in 2006, and only won 10 games in 2007), the Colts have continued to win massive despite injuries and huge roster changes.

Knowing this, that change is the natural cycle in order to remain competitive, it makes no sense to bring back someone like Edgerrin. He just doesn't offer anything, save the warm feel of sentimentality. Running back is one of the easiest positions to fill on a team, and rookies can have an immediate impact at that position (unlike WR or CB). With teams looking to fill DT, DE, and LBers in the first few rounds of the draft, the Colts could find themselves staring at a Knowshon Moreno or a Shonn Greene in the first or second rounds. Young players like that are what the Colts need. And with players like Mike Hart, Chad Simpson, and Lance Ball returning next year, the Colts will likely have a crowded backfield.

So, while I love Edge and will always consider him on of my favorites players EVER, his time with the Colts has past. I don't want him back in Colts blue because the Colts simply do not need him. A young team like KC or a vet team like Philly would be a better fit. And when he retires, #32 should retire as a Colts number. I like Mike Hart, but it is damned odd to see him running around with the number "32" on his jersey. Makes about as much sense as letting Sorgi play with "19" on his, at least in my mind.