Tampa Bay no longer running Tampa-2: How does this affect the Colts?

Share All sharing options for: Tampa Bay no longer running Tampa-2: How does this affect the Colts? 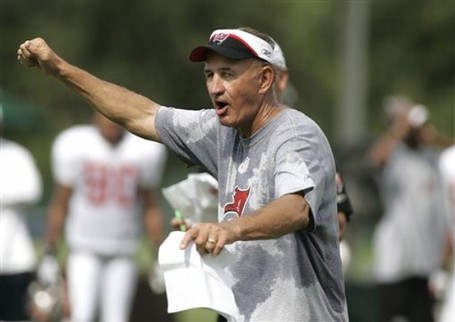 The retirement of Tony Dungy and the semi-retirement of Monte Kiffin (yes, coaching for his friggin son at Tennessee sure sounds like semi-retirement to me) really meant the end of an era for the NFL. Just like Tom Landry and Chuck Noll before them, Dungy and Kiffin revolutionized the way NFL teams play defense. From 1996-today, teams around the NFL (and college ranks) used the simple, technique and detail oriented scheme that Dungy and Kiffin masterminded in Tampa Bay when they coached together. Both men had worked together previously in Minnesota, with Dungy as defensive coordinator and Kiffin as his linebackers coach, but it was not until the league saw the dramatic turnaround of the Buccaneers in the late-1990s that teams started dumping old schemes in favor of the "Tampa-2."

We all know what the "Tampa-2" is, and if you don't I suggest reading this. Just like the "West Coast" offense or the "Zone Blitz" defense, the Tampa-2 changed the way teams played, coached, and even drafted. Players who played safety in college but were too slow to play the same position in college were switched to linebacker in the Tampa-2, like Derrick Brooks and Cato June. Now, with Jon Gruden fired in Tampa Bay, new head coach Raheem Morris (who was brought into the league by Tony Dungy) is junking the defense that made Tampa Bay famous and employing the old, sorry defensive scheme the Tampa-2 put out of fashion:

I'll just come out and say it- Jim Bates is a horrible defensive coordinator. Sorry Bucs fans, but your defense and your team is going to suck for a while. Ask Denver fans if they think Bates' style of defense meshes well in today's NFL. In a press conference yesterday, new Bucs General Manager Mark Dominik laid out what kind of defense Tampa Bay will deploy in 2009 (via Buc 'Em):

" [We have] young players that fit this new Jim Bates system in terms of defensive tackles and what we’re asking them to do. That was a big part of why we wanted to get Ryan Sims signed prior to free agency. He’s a young, bigger bodied guy that can push the pocket. With Greg Peterson (’07 draft) and Dre Moore (’08 draft), they’re big bodied guys that are - I think - able to step into those roles and they’ll get their opportunity to step into those roles."

"Part of it is the system that Coach Bates puts them in. Again, just like we were talking about with the other guys that are under contract now. You create pressure in the pocket so you can push the pocket back and pin your ears back off the edge. We’re expecting a lot of big things from Gaines Adams.

Translation- The Bucs are going to get roasted in 2009. This kind of defense was made obsolete back in 1999, when a second year QB named Peyton Manning took one look at it and said, "Hey, let's run no huddle on these punks all game." Sure enough, by halftime, those two big "space-eaters" in the middle are out of breath because the Colts had run them ragged. With the fat DTs panting, Manning and the offense then started running misdirection, play-action, and then BAM! Big play to the WR for a TD. Bates' system, when he was in Miami, was routinely carved up by Manning. When Bates brought the system to Denver, Mike Shanahan was so terrified by what Manning would do to it that he junked his entire defensive scheme for the 2007 regular season game against the Colts and deployed a specific scheme just to beat Indy. He benched his starting DTs, inserted smaller but faster DTs, and hoped they'd be able to keep up with Indy's No-Huddle offense.

I wrote this just after the game:

Here's where I will bash Shanahan, because he violated a cardinal NFL rule, imho. If you can't beat a team with what you are, then don't bother showing up at all.

I've said all this and I haven't gotten to my favorite part: Denver's defensive scheme. Denver fired their defensive coordinator last year (who ran a Cover 2 scheme) and hired Jim Bates, an over-rated dinosaur in terms of NFL coordinators. Bates employs a 4-3 scheme that requires the two DTs to be big, fat, slow, and lumbering sacks of flesh. These massive behemoths must take on two or three interior blockers while the linebackers and DEs make plays. Bates made this scheme work wonders in Miami. Just one problem: That was over seven years ago.

In today's NFL, this kind of defensive scheme simply can't work. Why? No-huddle offenses. Teams like Cincy, Indy, Pittsburgh, and now New England will simply go no-huddle, requiring those big, fat, slow, and lumbering sacks of flesh at DT to actually run a little bit. So, what did Shanahan do to combat this stark reality?

He sat his run stuffers.

Whenever I read pundits saying that teams need to employ "big run stuffers" at the DT spot, I sit back and laugh. If you do deploy "big space eaters," the other team's QB is going no-huddle on you and will run over them as they gasp for breath. This is the system Tampa Bay is now running. This is the successor to the famed Tampa-2. What this really will do is put Tampa Bay in the doormat of the NFC South, because Drew Brees and Matt Ryan are going to pick it apart.

So, what does all this mean for Indy?

I might be wrong about Bates in 2009, but I don't think I am. I've seen his defense fail far too often to have any faith in it. It might have worked pre-salary cap, but into today's market your team must be able to stop the pass. As I've saif repeatedly: Stopping the pass is priority over stopping the run. And Bates' defense is not very cap friendly. It requires two man coverage corners, big linebackers, large DTs, and pass rushing DEs. None of those come cheap. Tampa Bay is in deep trouble on defense in 2009, and the Colts have one less team to worry about on draft day and game day.