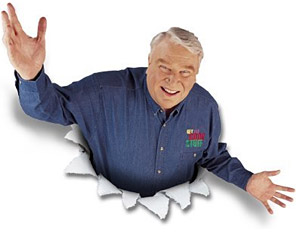 I won't lie or sugarcoat this: I think John Madden pretty much stinks as a football "analyst" and as a broadcaster. His idiotic ramblings and his silly catch phrases like "Boom!" and "That's a de-cleater" were always more annoying to me than insightful. The job of the football analyst in the booth is to help me better understand the game, not try and entertain me. The game entertains me, and when it doesn't, I turn the channel.

I don't know why NBC feels they need to have idiots tell us who is good or bad in the football world, but I long ago stopped trying to understand the broadcasting decisions of NBC's suits.

In general, Madden seemed like a good guy who cared about football. So, in that regard, it's sad to see him retire. When you compare him to other analysts, like the head-up-his-ass boob known to the world as Tony Kornheiser, Madden wasn't all that bad. At least he cared. I've always gotten the feeling Kornheiser doesn't. The check is the same for him whether he is covering football, baseball, or water polo. So, even though Madden's insight into football often made us fans wonder if he was borderline retarded, at least he had passion for the game. He broadcasters following in his footsteps don't.

Maybe that's why many of us fans watch games with the TV sound turned off.

Will fans miss Madden and his "coach charm" in the booth? Maybe, especially if Collinsworth says the typical useless crap he has routinely vomited at us TV viewers over the years. Remember when he proclaimed Tom Brady the "Player of the Week" prior to the 2006 regular season game against the Colts? Remember that? Brady threw 4 INTs that game, and the Colts beat the Patriots in Foxboro.

Yep, that is the guy replacing John Madden for the best, most lucrative broadcasting booth job in America. Again... groan!