Update: It's ok FO, I forgive you

Share All sharing options for: Update: It's ok FO, I forgive you

The Robert Mathis thing was a simple oversight- I think he would clearly count as the best value among defensive linemen. -Sean McCormick

Tully Banta-Cain, California, 239th overall to the Patriots. Banta-Cain was productive enough as a situational player to land a big contract with San Francisco. The 49ers quickly realized that Banta-Cain was not a difference maker and released him after one season, so now he's back in New England.

hmm, a situational rusher (with 12.5 career sacks, and a career high of 5.5). That's not all that productive aside from a single season that was just decent for a specialist. In the other 5 years of his career Tully recorded just 7 sacks. Is two sacks a year and a big contract from a bad organization from a 7th rounder all it takes to be the best value in the draft?

2 sacks per year isn't all that rare from a 7th round pick. In the 6 year period surrounding that draft 2000-2005, 5 other players were taken in the seventh round, who have gone on to record at least 2 sacks per season, including our own Raheem Brock (one more season in the league, double the sacks with 25).

Two rounds earlier a pass rush specialist was taken. He would record 3.5 sacks as a rookie, he over the next 5 years he would never again post a season with less sacks than Banta-Cain's career high. Over the next 5 seasons that specialist would record 50 sacks. This specialist drafted after over 130 players, and over 25 other DL/rush LBs would in his first 6 years record enough sacks to put himself just outside the top 100 in NFL history in sacks, and in the top 25 active players in sacks.

This 5th round pass rush specialist, the best DL value in the draft was none other than... 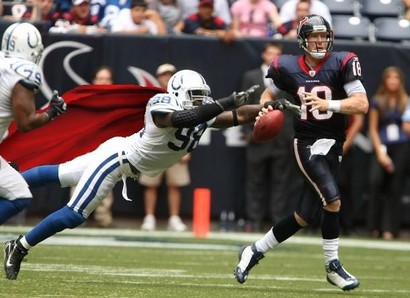 Master of the strip-sack (30 career forced fumbles) SuperMathis has forced more than twice as many fumbles as Banta-Cain has made sacks. Mathis had more sacks in any two consecutive seasons, than TB-C has in his career. Mathis made the Pro Bowl last year. Tully was cut.