Who The Hell Will They Draft 2009: USC QB Mark Sanchez

Share All sharing options for: Who The Hell Will They Draft 2009: USC QB Mark Sanchez

I know back in February we said that this series was for players that we think the Colts could draft in 2009. So, I imagine you're thinking Why the f*&k is this idiot doing a draft profile of Mark friggin' Sanchez? I'm pretty sure project geo is thinking this, and likely has more colorful metaphors to describe just how stupid I am in doing a Sanchez profile.

Well, the reason I think Sanchez warrants a WTHWTD is I think it  possible he could fall to 27th in the first. And, if he does, Bill Polian will draft him. If I had money (planning a wedding, so right now I have zilch) I'd bet on that. Bill Polian is not the kind of person to pass up a top 10 talent and a potential franchise player if he falls all the way to #27. The draft is all about value. In many cases, value over need, regardless of position. Though the best QB of his generation is playing for our team currently, the reality is he will not play forever. He might not play past age 36, as he has suggested.

Knowing this, and knowing the next time a Mark Sanchez-like player would be on Indy's radar would likely be following a 3-13 losing season, if someone this good falls this far to Polian, he will draft the guy. 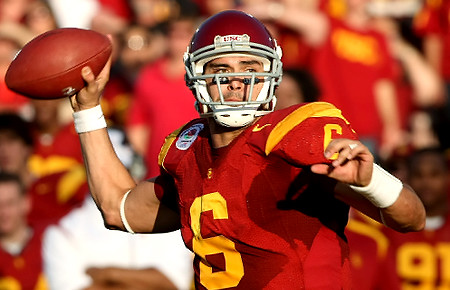 Yes, it is somewhat possible that the Colts could draft Mark Sanchez

So, that established, what do we know about this Sanchez guy other than the fact he comes from a school that produced Matt Leinart and John David Booty?

Well, for starters, we know the Colts have interest in Sanchez. The held a private workout for him a few weeks ago, and they likely attended the USC Pro Day yesterday (I have no confirmation, yet). Just like Indy attending Nate Davis' Pro Day, if Polian sends a scout to look at you or approves a private workout to evaluate your skills, he isn't doing it just for kicks. It means he saw something in you that he wants to evaluate. It means you have some value to the Colts.

The value that Sanchez could give Indy is immeasurable. Like what Steve Young gave to the 49ers, Mark Sanchez would be the ideal heir to the legacy Peyton Manning has built in Indianapolis. Is he a Peyton clone? No. Does he seem to have the same traits that helped Peyton become one of the best ever? Yes, he does.

Sanchez is probably the most intelligent quarterback in this year's class. Playing out of USC's pro-style offense, Sanchez excelled at reading defenses and properly going through his progressions. Is always looking around on the whole field, keeping his face mask square with the line of scrimmage. Good arm strength to make just about any NFL throw.

Cerebral. ... Reads defenses well and rarely throws into coverage. ... Goes through his progression quickly and takes what the defense gives him. ... Recognizes the blitz very well for a player of his experience and often targets the defenses' weak link when being blitzed. ... Good setup and a smooth, over-the-top delivery. ... Legitimate NFL arm strength. ... Capable of making every NFL throw, including the deep ball. ... Rather than relying on pure arm strength, Sanchez combines good velocity with rare anticipation, especially for a player of his limited experience. ... Consistently releases his passes before his receivers have even made their breaks, giving the defense little time to react. ... Distributes the ball all over the field.

The one positive trait that jumps out in the scouting reports, and on tape, is Sanchez's intelligence. He is a very smart player who understands blitzes, reads defenses, and know when and where to deliver the football. As we've seen with blockheads like Vince Young or immature morons like Leinart, if you do not have a brain above your shoulders, you cannot succeed in this league playing QB.

And, more specifically, if you are to have any hope at succeeding in the "K-Gun-style" offense developed by Peyton Manning and Tom Moore, you better know everything that happens on the field.

At his Pro Day yesterday, scouts marveled at Sanchez's ability to throw the ball on the run, throw with pressure in his face, and make good, sharp decisions. Indeed, when asked by scouts on hand to do specific throws that were not scripted, Sanchez did not hesitate. Sanchez not only did the extra work, he excelled at it.

But intelligence alone is not enough to be successful in this offense. Jim Sorgi is a smart guy, but when he gets down near the goal line with this offense, he struggles. The reason he does is he has no arm. Sanchez, while not having the gun of a Matthew Stafford or a Rhett Bohmer, does have a good arm. He can get the ball down field and place it in spots where only the wide receiver can catch it. He places good touch on the ball, and knows how to manipulate the ball's velocity to maximize accuracy rather than simply "gunning it in there." 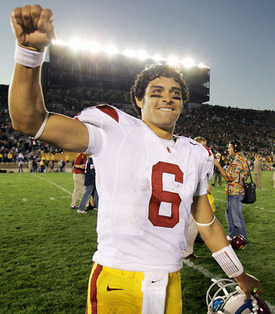 But what are the negatives?

Sanchez' release is a windup, slow release. It's not as bad as former Kentucky quarterback Andre Woodson, but it's similar. Does he have the size? Only 225 pounds, Sanchez needs to get bigger to handle getting hit in the NFL. Prone to some inconsistency. Had 22 touchdowns in six of his games. Still developing as a quarterback. Only started one full season and was injured at the start of the year. Started 16 games total.

Limited starting experience...Doesn't have the ideal height that you look for...Durability is a concern...Does not always throw a tight spiral...Has some trouble with the deep ball...Can get flustered by a strong pass rush...Makes some bad decisions...Won't run away from people...Had an issue  off-the-field...Was surrounded by a lot of talent.

Only one season as the starter and leaves USC with just 16 career starts. ... Career record of 4-2 outside of the state of California. ... Undeniable tools, but isn't yet a finished product. ... Runs a bit hot and cold and has a tendency to score touchdowns in bunches. ...

Another potential negative involves his character. While he was not known as a malcontent or a jack-ass in college, he was arrested in April 2006 after a female student accused him of sexual assault.

He was released from jail the following day, after posting $200,000 bail, but USC placed him on interim suspension that suspended him from the football team yet permitted him to take his semester finals, albeit separate from the general student body and under the supervision of campus security. On June 3, 2006, the Los Angeles County District Attorney's office announced no charges would be filed against Sanchez due to a "lack of sufficient evidence beyond a reasonable doubt", noting the case was "essentially a 'one-on-one' allegation."

It is the only major character blemish in Sanchez's career at USC, and it did not result in a conviction, or even a trial. If Sanchez were repeatedly known for these kinds of things, obviously he wouldn't be worth a bucket of piss, let alone a first round pick. But since this was an isolated, event the resulted in no conviction, I don't think it is a serious character issue red flag.

While it might seem unfathomable that the Colts will one day have to soldier on without Peyton Manning, what we do not want to have happen to Indy is the fate that befell teams like Miami and Denver when their legend QBs walked away. And while likely teams like Tampa Bay, Minnesota, or SF will not pass up Sanchez in the real draft, if you follow some of the mock drafts, Sanchez falls clear out of the first round. Just like last season, when the Colts said they'd draft Joe Flacco if he fell to Indy in the second round, Indy will indeed snatch up Sanchez if he falls to #27. It doesn't matter if Peria Jerry, Ziggy Hood, or Master Blaster is still there in the late first. When franchise QBs drop that far to you, you take them.

Value over need. It's the policy Bill Polian has followed for decades. Last I checked, it's worked out pretty well for him and us.