I hope you all enjoyed your weekend as much as I did. These last two days were the busiest this blog has ever been. Today and tomorrow, I'll be handing out "grades" for the eight picks the Colts made in the 2009 NFL Draft. These grades are based on whether the selected player filled a need and, based on their potential, warranted their selection at their respective pick.

Indianapolis ranked dead 31st last in the entire National Football League last year when it came to running the football. That's right. The team with the best QB in the league and a passing attack that scares DBs right out of their sneakers could only average a paltry 3.4 yards a carry for 1,274.

Now is running the football the be all and end all in the NFL? No. The worst rushing team in football was the Arizona Cardinals (3.5 a carry, 1,178total yards) and they were a stupid Kurt Warner INT away from winning the Super Bowl. However, the Cardinals play in the NFC, which is JV when compared to the AFC. Sorry NFC fans, but you don't have Peyton Manning and Tom Brady in your conference. The AFC does.

In the AFC playoffs, successful teams find a way to run the football effectively late in games. In 2006, the Colts beat the Chiefs, Ravens, Patriots, and Bears in the playoffs in no small part due to their running game. The dynamic pair of Joseph Addai and Dominic Rhodes ran all over those respective teams as Indy marched to their first Super Bowl.

Now, Dom is gone, and the Colts (and Bill Polian) seemed to come into this draft looking for someone to replace Rhodes by providing another "spark" in the running game. So, when Pick #27 in the first round came up, Polian did not hesitate: 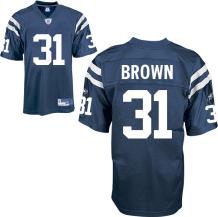 Brown is an explosive back who can burst through the line with tremendous speed. In the press conference following the selection, Polian used the word "game breaker" eight times when referring to Brown. From Mocking The Draft's scouting report on Brown:

Has possibly the best stiff arm in this class. Uses power and quickness in his stiff arm to knock opponents backward. Bursts into and out of holes with good speed. Uses his agility to avoid a lot of hard contact. Smart. Knows how to set up his blockers. Decent as a pass catcher. Known as a player who gives a lot of effort in the weight and film rooms.

What Brown supposedly lacks in "breakaway speed." If you watch videos of him, he will shoot through the hole, get  past the linebackers and into the secondary, and is then "off to the races." However, one a few occasions, once he is "off to the races," guys have run up and caught him from behind. Whether or not this will happen in the NFL remains to be seen, but as a general rule of thumb, it is better to have a player who can burst through a hole quickly than one who can't. A guy like Reggie Bush has amazing breakaway speed, but he really struggles hitting the hole, and he often cannot get past the front seven.

This pick was made to provide a "game-breaking" dynamic to the Colts offense. Remember how all of us wanted Matt Forte last year? Well, now we've got a player similar to Forte, and we're pairing him with a (hopefully) healthy Joseph Addai and an offensive line that has seen a lot of new depth signed recently.