We continue with our draft grades (and again, the "grades" aren't necessarily A, B, C, etc. but more High Marks and Low Marks), focusing now on the defensive tackles selected in the 2009 NFL Draft. DT was a major position of need going into the draft. Gone was Ed Johnson (un-drafted starter, 2007) and Quinn Pitcock (3rd rounder, 2007) from last year's team. Replacing them were 275 pound rookie Eric Foster and 265 pound second year player Keyunta Dawson. As quick and tough as Foster and Dawson played in 2008, a team cannot maintain a consistent defensive front with two tackles that are under 280 pounds.

Thus, the Colts targeted some big, explosive players at the DT position in this year's draft. 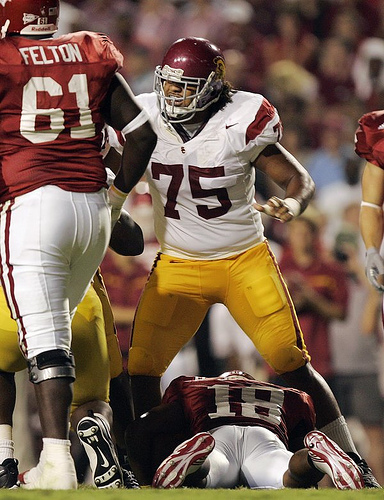 The Colts have had Moala on their radar for a while now. The 6'4, 305 pound DT breaks the mold a bit for DTs normally drafted or signed by the Colts. From Big Bill himself:

"[Moala's] the kind of long, tough, rough-house defensive tackle that we feel like can help us both in the run game and the pass. He’s a guy obviously that we thought very highly of. The pickings were getting a little slim on the boards. Everybody we had in the round had gone off at this point. Our board has been scarily correct and accurate. There weren’t many left (tackles) at this point, so we decided to go make the trade and make sure we got him. We’re anxious to have him. He’s a player who played mostly right defensive end in the 3-4 this year because they had to get (Clay) Matthews on the field, along with the other three linebackers. We saw him in a situation that is a little different than what he’ll play here. There were times when he was down in a true four front. We like his length. We like his toughness. We like his effort. The speed is good. He’s very different than what we’re used to having. That’s fine. We felt like it was a departure in the right direction."

They can play Moala at both the over and under tackle spots, maximizing his power to stop the run or his speed and long arms to pressure the QB. It's interesting the Moala was drafted by a team which plays Tampa-2 mainly because Moala played much of his college career in a hybrid 3-4. So, there will likely be some transition hiccups along the way as Moala shifts from 3-4 DE to Tampa-2 DT.

It's important to point out that while Moala is a bit of a departure, he is not some giant, fat, slow, Jabba-The-Hutt-type DT that the Colts are throwing out there. This is a 3-5 pound, 6'4 guy who runs a pretty fast 40. Indeed, while he could play the nose tackle spot in the DT rotation, Polian does not think he truly fits there:

"This guy isn’t necessary the ‘Big Guy’ in the middle. He’s a bigger guy than we’ve had. We still need length. We still need athleticism. We still need change of direction. The under tackle is still a guy that has to be able to get through the gap and disrupt. It’s hard to win consistently with 275-pound guys in there. It helps if they are 290 to 300. The nose tackle is another story. He could even be bigger if you could find one."

Moala provides that speed, that change of direction, that ability to penetrate and disrupt plays in the opponent's backfield.

"What you see is penetration, length in penetration, the ability to change direction and go chase the play. That’s critical. He’s a long-armed, long-limbed guy. That aids him in pass rush. He really has a chance to get up the field and get on the outside of a guard and do some damage in the pass rush. Our most successful inside pass rusher has been Raheem Brock, who is the same height and naturally quite a bit less heavy. This is a guy that has a lot of the attributes we’re looking for, plus the 305 pounds, quality and what he can do."

But, as quick and powerful as Moala is, many of us here have argued that a penetrating DT is not what the Colts need. Players like Brock, Foster, and Dawson have filled that role quite well in year's past. The Colts won a Super Bowl in 2006 with Brock starting every game at DT. What is desperately needed since Ed Johnson was booted off the team for smoking weed is a nose tackle, a guy who can eat up two offensive linemen, allowing the other DT to shoot the gaps and get into the backfield. 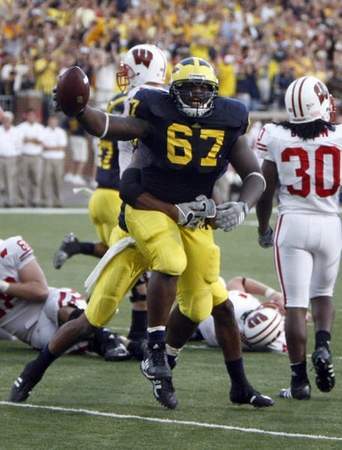 Taylor is 6'0 and almost 320 pounds of mean. He started 36 games for Michigan and had 17.5 tackles for losses and six sacks at the nose tackle spot. That's damned impressive! From Polian [emphasis mine]:

"He's a wide-body and a guy with explosion," Polian said. "He's a true nose tackle. That's something we felt like we needed to add in terms of how we structure the defense. He's a prototypical nose tackle."

Taylor is short but powerful. Like Casey Hampton in Pittsburgh, Taylor could be the wrecking ball the Colts have been missing, and at 320 pounds, can can take up a bit more space. thus, players like Moala, Dawson, Foster, and Brock can play three technique and attack the backfield. Pairing Taylor with Antonio Johnson and Daniel Muir gives the Colts some much needed depth at the nose tackle spot. Indy has also signed rookie free agents Pat Kuntz from Notre Dame and Adrian Grady from Louisville, adding even more depth at DT.

At the end of the draft, if you were like me and thought that Indy absolutely had to grab quality depth (and possibly a starter or two) at DT, then this draft did not disappoint you. Moala and Taylor provide great anchors that should shore up the team's run defesne and allow Dwight Freeney, Robert Mathis, Raheem Brock, and Marcus Howard to attack the QB.