Pretty much everyone and their mother thought the Colts were going to take a wide receiver with their first pick in the draft on Saturday. With the departure of Marvin Harrison, and with solid receiver like Kenny Britt and Hakeem Nicks available in the late-first round, it appeared obvious that the Colts would go WR and add yet another first round blue chip to their already impressive receiving corps.

As we now know, they didn't draft a WR in Round One. In fact, the waited all the way till the Fourth Round before they finally took WR Auston Collie out of BYU. Unlike Britt, Nicks, or even Darrius Heyward-Bey, the Colts took Collie not because they expect him to play on the outside. They took Collie because, in the mind of Bill Polian, the kid is a clone of Brandon Stokley, who was once one of the best slot receivers this league has ever seen. 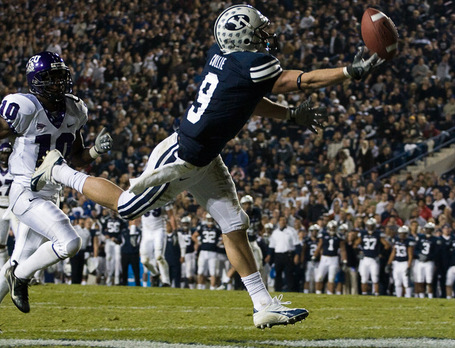 Collie is one of these guys were should have done a draft report on. I mean, it is OBVIOUS how much he matches the kind of WR the Colts love to draft. From one scouting report:

Collie is a sharp, precise route runner who knows how to get open. His football speed is a tad faster than his 40 yard time (ran a slow 4.55 at the Combine). He has quick feet and is more athletic than many believe. Excelling at selling fakes, Collie has very good hands. He lacks prototypical size, but doesn't get shoved off his routes; he gets up and grabs anything thrown his way. He has a good demeanor.

He runs great routes and catches what is thrown to him. He doesn't have great size (6'0, 200 pounds), but as we have long maintained here at Stampede Blue, height and weight are over-rated when evaluating a player. This is especially true of receivers.

Collie's strengths seem to be geared towards him playing the slot receiver position when the Colts go 3 wide. From Bill Polian:

If you think Brandon Stokley, that’s [Collie's] style. Let’s hope he turns out to be as good (as Stokley). He has good hands, (runs) great routes and is a good slot receiver, a very good runner after the catch. He has kickoff return ability as well.

So, to be clear, drafting Collie was not a move to "replace" Marvin Harrison. Marvin's successor as the primary receiver in Indy's offense is Reggie Wayne. Replacing Reggie as the #2 receiver is Anthony Gonzalez, who was always better playing outside than he was playing slot receiver.

Now, it seems like Collie will battle with Roy Hall and Pierre Garcon from the slot receiver spot.

Regardless of whether Collie wins the job or not, he will likely spend a lot of time on special teams, regardless. But that doesn't seem to bother Collie. He seems like yet another high character guy who is willing to play anywhere:

"I’m anywhere the Colts need me to be. I can play whatever position as far as inside at the slot or outside. I definitely think I run exceptional routes and have good hands. I think that’s kind of the personality of the Colts wide receiving corps. They’re guys that are technicians and guys that know how to get open, and guys that can make plays. I definitely think that this is the best fit for me. I can play anywhere they want me to play."

Seems like Polian has found yet another WR that can grow and mature in this offense.

Some video if Collie making some absolutely SICK catches: