If there was a consensus head-scratcher pick among Colts fans on the second day, likely that pick was Auburn CB Jerraud Powers. Powers was taken in the third round, and if you know the history of Colts drafts during the 11 year tenure of Bill Polian, you know that the third round has been a horror show. 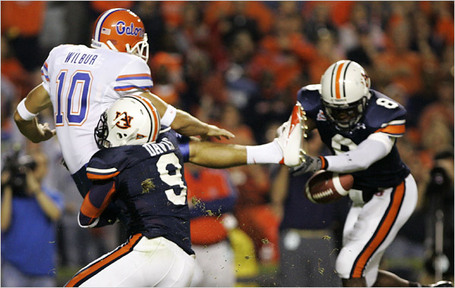 after blocking his punt

The third round has not been kind to Bill Polian of late. Third round picks Quinn Pitcock (2007) and Vincent Burns (2005) are completely out of football. Gilbert Gardner (2004), quite possibly the most useless linebacker on the planet, was another third rounder. The another third rounder was Freddie Keiaho (2006), and while he played decently with the Colts for two years, he has yet to re-sign with them, or any other NFL team this off-season. And with such a thin draft at linebacker, the fact that Keiaho hasn't signed with anyone tells you something.

Now, Jerraud Powers is the latest Polian third rounder. Can he buck the trend?

Well, the interesting thing about Powers is he certainly bucks the trend when it comes to DBs the Colts normally draft. In his press conference on the second day, Polian stated that it was only the defensive tackle spot where the Colts deviated from their normal pattern of drafting. However, Powers seems to indicate another shift, this time when it comes to drafting "Cover-2-style" corners.

Here's a scouting report on Powers:

Weaknesses:
Does not have the ideal height or bulk that you look for...Isn't very strong...Not a great tackler...Struggles to get off blocks...Won't offer much in run support...Takes too many chances...Durability concerns.

It's the weaknesses that caught my eye. If I had to look at this guy pre-draft and evaluate whether or not he was a candidate for the Colts to draft, I'd say no. Indy typically does not draft corners who can't tackle. In a Tampa-2, the corners have to tackle just as sharply as the linebackers and safeties.

Powers seems to have very strong coverage skills with some speed added for good measure. He's tough and seems to have a strong work ethic, but when I see coverage guys who can't tackle, I do not think  "Cover-2 corner."

But maybe this small shift was made in response to the trned Polian is seeing with this team. Guys like Jennings, Coe, and Hughes are all solid tacklers. They are effective ball hawks and they can play tough by laying big hits. What they lack a little bit is coverage ability. The loss of Keiwan Ratliff is off set somewhat by drafting Powers, but it is a bit unclear where Powers could play.

Is he Marlin Jackson's replacement after 2010 (it's unlikely Indy will re-sign him, for cap reasons)?

Was he just drafted for special teams? The pick above seems to suggest yes. But really, who knows?

What we do know is a third rounder was invested in him. So, any talk of this guy sitting on the sidelines is rubbish. Powers will play next year, or this was yet another wasted third round pick. What this pick also seems to signify is a lack of faith in Michael Coe and Dante Hughes, two corners drafted in 2007; Hughes especially. Hughes was a third round pick in 2007, and he seemed to find his way into the doghouse last year after a solid rookie year in 2007.

It will be interesting to see if Powers manages to wiggle his way into the nickelback spot. If he doesn't, then this was yet another third rounder wasted. In my not-so-humble opinion, third rounders need to play NOW, not in a year or two. We can have project players in rounds 5-7. Guys in round three are needed right now, and currently we have two corners (Powers and Hughes) who are third rounders that need to produce right away. The problem with this is the defensive backfield in Indy is very crowded. Tim Jennings (second rounder in 2006) is cemented in as the nickelback. So, unless Jennings loses his job (which would make him a bust of a second round pick), we likely won't see Powers or Hughes play much unless there's an injury.

In general, I don't like this pick. I can understand added some players for the future, but Indy has plenty of DBs. So, unless those DBs were wasted picks, this pick was not necessary.