Folks, it looks like we are going to yet another loug-mouthed, frosty-haired kicker from West Virginia working on our special teams. 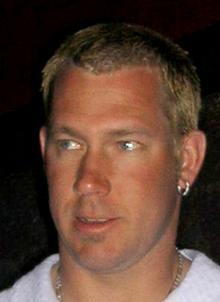 And here's the one Indianapolis just drafted a few days ago: 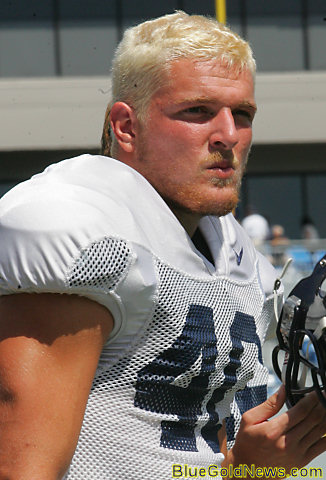 Both guys are loud. Both are boisterous. Both like to draw attention to themselves. But, if you listen to new Colts 6th round selection Pat McAfee, he very much wants you to know that he is not an "idiot" like Mike Vanderjagt:

Folks, all you have to do is listen to Pat McAfee talk for 5 minutes, and instantly you are going to like him. Pat McAfee is colorful, affable, funny, and very much aware of what he is all about.

The Colts and Bill Polian have made it clear: Pat McAfee is the new punter for the Indianapolis Colts. Though he kicked FGs, handled kickoffs, and punted at West Virginia, the Colts drafted McAfee to succeed Hunter Smith, who departed via free agency and signed with the Washington Redskins.

Most of McAfee's scouting reports focus more on his FG kicking than his punting. In college, they use a little bit different style of punting formation, more akin to rugby. So, it isn't really all that clear how well McAfee will punt in the pros. What we do know is the Colts traded a 2010 6th round pick to move up in the sixth round and get McAfee. So, if Bill Polian did that, the Colts must feel as though this kid can get the job done.

Aside from punting and kicking, the other thing McAfee can do is run and tackle. Yes, that's right. At 5'11, 228 pounds, McAfee isn't some skinny bitch out there whiffing on tackles if a returner gets past the first line of defense. McAfee is the kind of punter that will chase the returner down, wrap him up, and bury him into the turf.

Don't believe me? Watch this:

That is our new punter, boys and girls.

Another interesting factoid about McAfee that seems to distinguish him from his predecessor is while Hunter Smith had a Christian rock band on the side, McAfee has dabbled in professional wrestling on the side. Hunter Smith's band name was Connersvine. Pat McAfee's wrestling opponent was named War Pig!

Again, he has been with the team all of three days, and already I REALLY like Pat McAfee. You'll like him as well when you listen to him on 1070 the Fan call Mike Vanderjagt an "idiot" and say that he is very excited to play with his personal hero, Adam Vinatieri.

So, while we can't say for sure just what kind of punter McAfee will be, what we do know is he will certainly be a colorful character. And while he may say or do some silly things, this kid seems very much aware of the wonderful opportunity he is stepping into. He is working with his idol (Vinatieri) and has a good coach in Ray Rychleski (who comes from the college ranks) to teach him how to punt in the pros.

McAfee is no stranger to kicking and punting in pressure situations. Football is life at West Virginia, and when McAfee would miss FGs, he would get death threats. No kidding. So, this kid knows how to deal with pressure, and he knows how to work hard. He's going to fit in well here.