KingRichard posted this news link before me, but according to the Indianapolis Star, Freddy Keiaho has officially re-signed with the Indianapolis Colts. Last year, Freddy was the starting weakside linebacker for Indy's Tampa-2 defense. He tested the free agent market and didn't get too many offers. Now, he's back.

Say what you want about Freddy, but he's a tough guy who plays 100% every snap of the game. His durability and his coverage skills have been a little suspect. It's also unsure whether or not Keiaho will even start this year. Clint Session has come on very strong, and is a much better candidate at weakside than strongside. Indeed, Coach Caldwell stated recently (but prior to re-signing Keiaho) that Philip Wheeler was now the starting SAM backer while Clint Session will move to WILL. Is that still the case now? Does Freddy get his old job back? Should he? What about Wheeler? Where does newly signed LBer Adam Seward fit in here?

Training camp battles at the linebacker spots this year should be very, very interesting. In the meantime, welcome back Freddy! 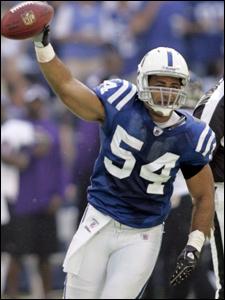