The draft grades come to a close as we evaluate the worth of Purdue QB Curtis Painter and Maryland OG Jaimie Thomas. Both players were late round picks, and both offer depth at positions many feel there was already enough depth to begin with. So, the question hovers, Why draft them?

Let's just get this out in the open right now: Curtis Painter was indeed brought in to compete with Jim Sorgi as the back-up QB to Peyton Manning. He was also brought in to, maybe eventually, replace Peyton Manning. If he wasn't, then this was a total waste of a draft pick, and Bill Polian should have his head examined. I know what Bill said about this issue. I think he is either delusional or, more likely, full of sh*t:

Polian said the selection of Painter is not a reflection on Jim Sorgi. "This is nothing that has to do with Jim Sorgi," Polian said. "We talked about committing to carrying the third quarterback. We've not done that in the past. That's been a practice squad spot. That's not ideal."

Yes, it does have something to do with Sorgi, Bill. If the Colts just wanted a third QB, there are plenty of guys they could pluck off the street to carry a clipboard and fetch Peyton Manning his Gatorade. Some of these guys (lke Josh Betts or Quinn Gray) are veterans who Indy can sign for next to nothing and have a pretty solid understanding of the Colts offense. So, don't feed me the "This is nothing that has to do with Jim Sorgi" line. It insults my intelligence. We all know Jim Sorgi is a VERY limited QB. He showed that in pre-season last year. His arm strength is crap and he cannot get the ball in the endzone inside the 20s. 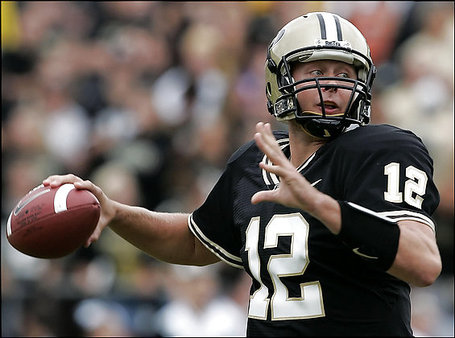 Curtis Painter can get the football down the field, unlike Jim Sorgi

Painter was drafted to replace Sorgi, and eventually replace Manning (maybe). If he wasn't, then this was a wasted pick, and better players who could fill bigger needs should have been taken.

So, we will just assume that Polian's statement regarding Sorgi is the BS we all know it to be (again, I love ya, Bill; but I know a steaming pile of BS when I see one). Who is Curtis Painter? Is he another Jim Sorgi, or, unlike Sorgi, can this guy actually throw the ball down the friggin' field?

Unlike MasterRWayne, I have no bias against Purdue players. Purdue's football program is a helluva lot better than Indiana U.'s, and produced better overall players. Sorry IU faithful, but that's just the facts. When IU produces a Drew Brees, then you can talk trash. Like Brees and Kyle Orton, Painter is trying to follow the tradition of Purdue producing solid NFL starting QBs. From Hammer and Rails, SB Nation's Purdue blog:

Painter could easily have a career much like Kyle Orton in that it takes him a few years to develop.

If you read Painter's scouting report, he offers more talent (it seems) than both Brees and Orton:

Painter is roughly 6'3, and he can really fling the ball down the field. Unlike Josh Freeman, he has good QB mechanics, knowing how to release the ball so his spirlas remain tight, allowing the ball to can maximum velocity. And unlike many other college QBs, he is capable of putting the ball where receivers are going, not where they are. In college, QBs throw to were receivers are. If you do that in the NFL, that a pick 6 the other way. In the Man's League, the throws must go to where the receiver is supposed to be, especially in this offense. Painter also sells the play-action fake very well, another big plus in Tom Moore's scheme.

So, lots of positives, right? Why was he drafted so late?

A big issue with Painter is his footwork, which needs a lot of work. Feet placement and leg drive are everything for NFL QBs. Feet must get set, shoulders square to the target, and legs ready before the ball can get thrown. Painter really struggles with this, and it often leads to "poor decisions" (a phrase roughly translated into "interceptions").

But, under new QB Coach Frank Reich, Head Coach Jim Caldwell (a QB guru in his own right), Tom Moore, and Peyton Manning, this kid Painter could develop into a pretty good player. He has the arm strength and the size to develop, and being an Indiana boy, he knows first hand just how awesome the Colts organization is and how they develop their players internally.

Hammer and Rails, one more time:

Curtis went 201st overall to the Colts. It is safe to say he isn't exactly going to challenge for the starting job. It's a high-risk, high reward opportunity for Curtis. If he can make the roster (and beat out long-time backup Jim Sorgi) there are few better quarterbacks in the league to learn from. Unfortunately, the odds are against him even making the regular roster. Sorgi is fairly entrenched as Manning's caddy, and the Colts rarely have three quarterbacks on the active roster because Manning is so durable. Painter may find himself on the practice squad for a year or two, which is still a very good place to learn from Manning. I would honestly be shocked if he played a down in the NFL this regular season.

Make no mistake, this kid wasn't just drafted for gits and shiggles. He was drafted to push Jim Sorgi out the door. Sorgi is certainly not "entrenched" as Manning's "caddy." That honor belongs to Anthony Gonzalez, also sometimes referred to a "Daddy Peyt's Golf Bitch."

If Sorgi were entrenched as the primary back-up QB, then the two veteran QBs Indy signed in Training Camp last year wouldn't have been brought in. And if carrying three QBs is an option Polian and the Colts are seriously considering, they need a reality check. A third QB is a wasted roster space. With the injuries we've typically had and the amount of defensive and special teams rotations we use in games, we need as many warm bodies as we can get. So, unless Polian expects Painter to play on special teams as a gunner, its a waste to have him active on gamedays as a third QB.

The final pick we will "grade" is Maryland OG Jaimie Thomas. For the second year in a row, the Colts end the draft picking an offensive lineman with the first name pronounced "Jay-me." Last year it was Jamey Richard, who played a ton in 2008 as a center and guard. This year, it's Jaimie Thomas, a 6'4, 322 pound monster from Maryland. 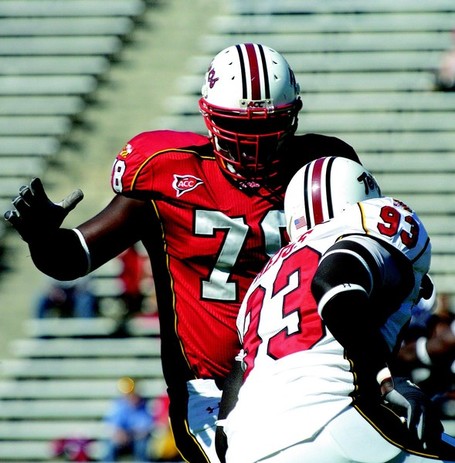 day in order to remain satisfied.

Right now, Thomas is the biggest guy on the team. To give you some perspective, he is an inch taller than last year's top draft pick (OG Mike Pollack), and outweighs Pollack by nearly 25 pounds!

Thomas is yet another Bill Polian late round player that he will hand off to offensive line coach Howard Mudd to mold into yet another draft gem. With Ryan Lilja's career totally up in the air because of his lingering injuries, drafting Thomas (and signing Kyle DeVan and Brandon Jones) seems to suggest the Colts do not have a lot of faith in Lilja's health. The simple reasoning is if Lilja is healthy and ready to go, the Colts then have waaaaaaay too many players at the OG positions.

So, assuming Lilja is not healthy, this was a strong pick to close out the draft.