Share All sharing options for: Defensive Line: Oh, The Possibilities

I am extremely excited about the season.  With the draft, I got to see the Colts add the players of the future, and no draft moves got me more excited than the defensive line signings.  While I do not want a line of big fat guys who get tired by watching a three yard run, size was clearly a necessity.  To beef up the skinny defensive tackles, Polian takes Fili Moala from USC and Terrance Taylor from Michigan.  Even though I hate those two teams, I know these guys are great.  Moala was an excellent pass rusher at SC and Taylor just shut down the lanes.  Drafting these two make our run defense better, they help take pressure off of Mathis and Freeney, they will make our linebackers look better and they will keep teams from controlling the clock.  Needless to say, I am putting a lot on these two's shoulders, but they are 2nd and 4th round picks respectively and I expect nothing but the best from them.  So without further adieu, here's my early rundown of the defensive line.

Dwight Freeney: Freeney is the best pass rusher the Colts have ever had.  His dominance transcends the game.  He is held on every down and I'm not sure if that is exagerration either.  His 10.5 sacks gave him his first double digit sack year since 2005.  Overall, Freeney is one of the top defensive ends in the game.

Raheem Brock: Brock has been moved around on the defensive line a few times.  Last year he had a nice year of 30 tackles and 3.5 sacks while splitting time with Robert Mathis at left end.  At 274 pounds, he has good size for a defensive end and is stronger against the run than any of the other defensive ends.

Robert Mathis: Mathis had an unbelievable year last year.  11.5 sacks and 48 tackles with only two starts along with a Pro Bowl was a highlight of last season.  Everyone remembers Super Mathis against Houston and his touchdown against Cleveland.  Mathis is about to peak.  Expect him to dominate right tackles next year.

Marcus Howard: Everyone here remembers the Howard hype before the 2008 Draft.  He dropped to the fifth round when we all thought he would be the third round pick.  I remember being thrilled when we took him.  Last year he had 1.5 sacks against the Titans in the last game of the regular season.  He should be the primary backup for Freeney this year.  I expect him to get more playing time and to increase that sack total.

Curtis Johnson: Johnson is representing the D-II level on the team.  From Clark Atlanta, Johnson was one of many undrafted free agents to make the team last season.  Like Howard, the only time he got substantial playing time was against Tennessee and also like Howard he got a sack and played well.  Johnson is a small yet fast defensive end who will be a special teamer this year and hopefully can grow into a situational pass rusher.

Eric Foster: If I see one more person dissing Foster I could scream.  Foster was the bright spot for the defensive tackles last year.  I don't care if he is 265 pounds.  If a 265 pounder can do what he did against Pittsburgh, I will take him any day.  He was the leader at Rutgers, and he can be the leader of the defensive line.  Foster should start at UT unless Moala really impresses in camp and preseason.  I am a huge Eric Foster fan and I do not understand why people are down on him.

Antonio Johnson: Johnson was a midseason pickup from the Titans practice squad.  After taking David Thorton and Jake Scott, we decided to take one of their guys.  Well, Johnson had a lot of success even if the stats don't show it.  He was a solid nose tackle and really helped the run defense.  It was easy to tell the difference when he was in and when he wasn't.  Even with only 13 tackles, he had a good year.  Like Foster, he should be a starter unless Terrance Taylor has a great camp and preseason.

Fili Moala: Even though he went to USC, I am a fan of Fili Moala.  He is a big UT who will make the transition from being a 3-4 end to being a Cover-2 UT.  Because of this, he won't start at the beginning of the year, but he could definitely take Foster's starting job at some point next season.  Moala was a third team All-American last year and played on a stacked defense.  Todd McShay had Fili Moala going number one overall for his first 2009 mock draft.  He battled back spasms early and that is what hurt his stock and performance last season. Moala was a steal in the second round and should make a major impact early.

Terrance Taylor: The Colts drafted two defensive tackles from Notre Dame's two rivals.  It's bitter sweet.  Bitter because I will have to cheer for a USC and a Michigan player but sweet because Taylor and Moala are really, really great.  The Colts have Taylor listed at an amazing 319 pounds.  Taylor won't be a Corey Simon who was basically a morbidly obese man who the Colts paid to sit in the middle of the line.  Expect more of the Booger McFarland role.  Taylor will make a huge impact in the running game.  The reason why he was a fourth round pick is because he is one-dimensional.  Of course the Colts really need that dimension, so I'm fine with it.

Daniel Muir: Poor Danny Muir.  He signs with the tiny defensive tackle team and what do they do the next offseason?  Sign two big defensive tackles.  Muir only had 3 tackles last year and didn't get very much playing time.  Muir will have to fight to make the roster, but he is a talented player and will have an outside shot to make it on the roster.

Keyunta Dawson: Dawson is too tiny to be a defensive tackle.  Normally I don't look at size, but he's 254 pounds!  That's how much they feed Terrance Taylor per day!  Dawson really struggled last year.  Either he moves to defensive end or he gets cut.  It's that simple.

Pat Kuntz: Polian just decided to get the circle of life when it comes to defensive tackle.  He drafts players from SC and UM (scum) and he signs Pat Kuntz, maybe the greatest guy from Notre Dame since Joe Montana.  At 285 pounds, he has good size for a UT.  At Notre Dame he was known for wearing jean shorts and having crazy hair styles.  This picture sums up Pat Kuntz. 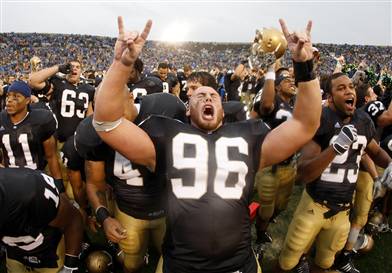 So, after seeing all of the defensive linemen currently on the roster, I can now make my predictions for what the lineups will look like and who will make the roster.  Here are what I expect will go down once final cuts come in.

I don't want Dawson on the team next year.  He's too small to be a defensive tackle and too slow to be a defensive end.  Muir is just the odd man out.  Kuntz would be a great addition to the practice squad and would easily be able to step up in case of injury.  Now here are my projections for the situational lineups.

So this is my early, last hour of April rundown of the defensive line.  After looking at the stats and reading scouting reports, I don't think I can get more excited for the season.  June 6th, open minicamp at Franklin, can't wait.