Who They Hell Will They Draft 2009: Evander "Ziggy" Hood

Share All sharing options for: Who They Hell Will They Draft 2009: Evander "Ziggy" Hood

Evander Hood, also known as Ziggy, has been projected by draft prognosticators not only here at Stampede Blue but all over the Internet.  Hood played for a bad defense at Mizzou, and to be honest, I never got to see him play like most other prospects I've been coveting.  Over the past weeks, I have got to know about Ziggy Hood and his pros and cons.  Defensive tackle is a huge need for the Colts, and Peria Jerry and Ziggy Hood are the best fits.  Hood could be the Colts pick at number 27, but many mock drafts including the current Mocking the Draft one has him going in the late second round after the Colts number 2 pick. 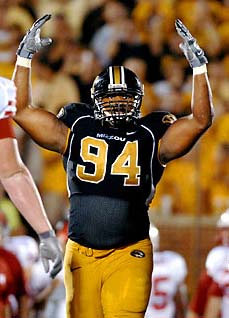 Ziggy Hood is a tough defensive tackle.  In 2006, he broke his foot.  He missed three games after having screws put in his foot and ended up playing the last seven games.  Hood plays through pain and has all of the mental attributes Polian and the Colts want in a player.  He is the anti-Quinn Pitcock.

Hood weighed in at 300 pounds at the combine, which is just a little bit more than his playing weight at Missouri, which was 295.  Even though he put on some pounds, he ran a phenomenal 4.89 forty time, the fastest out of all of the 300+ pounders at the Combine.

When looking at Hood, intangibles dominate his positives.  Here are his skills according to various draft sites.

Strengths: Hood is a physical and aggressive tackle who likes to get after it along the line of scrimmage. He has good size and his frame looks to be nearly maxed out. Hood's tenacity is an asset against blockers. He keeps his hands active to quickly disengage and work down the line or into the backfield. Plays with a lot of intelligence and recognizes when cut blocks are coming or if a runner is changing direction. Hood displayed solid athleticism and agility at the Combine, which shows he could hold up in the 3-4.

Strengths: Hood is an active defensive tackle who thrives at penetrating the backfield. He is an aggressive defender who fights whistle to whistle. His motor is non-stop and he plays a physical brand of football. He has a good initial burst off the line that allows him to create trouble for slower blockers. He pursues the play well and chases down from the backside. Shows nice tackling technique, and will wrestle the ball-carrier down. Good pass rusher. Has great awareness of the game and doesn’t take many false steps. He can take on plays at the point of attack. Is overall quite strong. Has a good frame that could get bigger in the NFL. Plays with a nice wide base, and is not easily rocked back. Has the kind of toughness that teams will like, and plays through pain. In 2006 he played a good portion of the season injured after breaking his foot.

The technique part is what stands out.  After watching the 2008 Colts defense, they did not know how to get a runner down on first contact.  The Jacksonville game in Week 3 was one of the most pathetic attempts at tackling a pro football team can have.  The Colts should have won that game but a bad call and no defense on the last drive blew it.  If the Colts had someone like Ziggy that could tackle Jones-Drew or Taylor, Scobee wouldn't be kicking for a win in the final seconds.  Along with the intangibles, the quick burst and pass rushing is something the Colts have missed from the defensive tackle position.

Like all prospects, Hood has weaknesses.  Let's see what Hood lacks according to Mocking the Draft, Draft Countdown and New Era Scouting.

Weaknesses: Because of his somewhat small size for the position, Hood will probably never be a two-gap plugger at the next level. Watching Hood, he'll too frequently get high in his stance, allowing offensive linemen to push him around. Has trouble with double teams, which he routinely saw his senior season. Doesn't finish plays off in the backfield. Had just 2.5 tackles for a lost and 1.5 sacks in 2008.

Weaknesses: Hood is not overly athletic. His timed speeds are a bit inflated, and not a representation of his game speed. His burst off the snap is inconsistent. He is easily stood up by blockers in passing situtions. Hood needs conditioning work because he can fade late in the game. Is not very tall and has short arms. A lunchpale kind of player who will get by in the NFL on his effort and hustle, not his physical skills.

Overall, it seems like the consensus is that he will never be a star but he can be a big contributor.  The Colts don't need a star at defensive tackle.  They need a Ziggy Hood.  I don't care if he isn't the most physically gifted player.  If he works hard he will be a starter.  A rotation with Antonio Johnson, Daniel Muir and Ziggy Hood can be good enough to get the defense off the field and let the best player in the game get in and run his offense.  Hood has what the Colts need.  Pitcock was a physically gifted and talented player, but he was a wimp and a quitter.  Hood has the mental toughness to improve his game and be what the Colts have needed at defensive tackle for the longest time.  I will leave you with jerseys that could pop up at local Finish Lines and videos of Ziggy Hood. 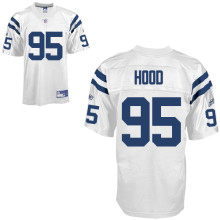