Who The Hell Will They Draft 2009: Ball State QB Nate Davis

Share All sharing options for: Who The Hell Will They Draft 2009: Ball State QB Nate Davis

Wait, doesn't Peyton Manning still have a good half-decade left of football in him?  Why the hell would Polian draft a QB, especially when there is already a backup QB who knows the system?  First, Polian is an unpredictable madman, and second, think back to August when you first read or were told that Peyton Manning had knee surgery.  My stomach jumped right to my throat and it took me days to actually believe that it wasn't a horrible joke.  Luckily, Peyton ended up recovering and playing all 17 games, but that isn't guaranteed to be the case every time.  We've seen Tom Brady go down for the season along with other top QBs like Donovan McNabb and Carson Palmer.  One hit and Peyton's season could be done.  With all of that being said, QB is a need no matter who the starter is.

After everything that has happened this offseason, Nate Davis would be the QB taken if Polian decides to groom a replacement for Sorgi and ultimately Manning.  The disaster known as the Nate Davis Workout showed how Davis' stock is plummeting, something that makes it more likely Davis will be selected.  There is nothing better than a local college star ending up on the team. 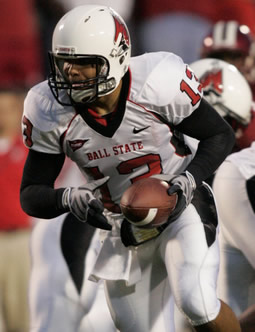 Nate Davis was a three year starter at Ball State, the closest 1-A school to Indianapolis.  Last season was the breakout year for Davis.  Ball State had an undefeated regular season before losing to Buffalo in the MAC Championship Game and Tulsa in the GMAC Bowl.  Those final two games started the downfall of Davis' draft stock.

After head coach Brady Hoke left Ball State for San Diego State, it was pretty obvious Davis was leaving early to go pro.  At that time, it looked like a sensible move.  He was being projected as the third or fourth QB to be drafted.  Now, he is considered a fourth rounder at best.  With two fourth round picks, it's the perfect time for the Colts to pick up Davis.

After his amazing 2008 season in which he lost his best receiver Dante Love to a tragic neck injury, Davis had a large list of suitors.  However, as the offseason went on, the Colts ended up being the only team to attend Davis' workout.  Does this mean the Colts are the only team that will think about taking him?  Of course not.  Every team saw him do work at the Combine, but it does say a lot about his stock.

Here are Nate Davis' positives according to Mocking the Draft.

Strengths: Watching him play, the first thing that is really noticeable about Davis is his arm. He puts a great touch on passes and typically places them only where his receiver can catch them. Can make a lot of difficult mid-range NFL throws like the corner out. Very good accuracy. Very poised in the pocket. Doesn't dance around when the pressure is on. Has a high release to make up some for his shorter-than-ideal stature. Possesses the athleticism to tuck the ball and run, even though he doesn't have great speed.

These are all great for a pro QB.  He doesn't throw interceptions and has a good pocket presence.  A lot of NFL QBs are plagued with happy feet in the pocket and turnover problems, so it's nice to see a late round prospect who won't cause problems for his team.  As many Colts fans probably have, I watched almost every Ball State game this year.  The one thing that stood out to me was his decision making, especially while under pressure.  Davis has a great skill set for an emergency QB.  When it comes to replacing a superstar like Peyton Manning, making many mistakes can turn the fans against the QB.  It would be tough for Colts fans to get mad at Nate Davis when he doesn't throw picks and makes great decisions.

Of course, great players don't have stocks that resemble the stock market on October 29, 1929.  Here are his negatives.

Weaknesses: The biggest knock on Davis is that he has played in the spread offense his whole career and may be slow to adjust reading NFL defenses. Only took snaps from under on occasion. Height is a major concern. Davis would sometimes have trouble seeing over the left side of his line at Ball State. Played in the Mid-American Conference which doesn't have a lot of quality defensive backs. Had a good bit of talent around him with tight end Darius Hill and receiver Dante Love, before he was hurt. Struggled down the stretch of his junior year.

I feel like this is a little incomplete.  A problem is that he doesn't hold the ball on the laces and he wears a glove on his throwing hand.  This is just plain weird and can cause fumbling problems, which we saw in the postseason.  His line gave up during the Buffalo game and he fumbled because of a lack of possession.  Height is the biggest problem I can see.  He is a tiny QB and that can cause problem with big linemen like Tony Ugoh on the left side of the line.

In the end, I really like Nate Davis.  He is a great leader and makes great decisions.  Even though he has a learning disability which has caused problems with him picking up playbooks, he would have time to absorb Moore's plays.  If the Colts were to draft Davis, he would likely be the number 3 QB behind Manning and Sorgi for a year and then take over for Sorgi.  I will leave you with a highlight reel and a jersey you might see on the clipboard holder next year.

And here is your Nate Davis Colts jersey! 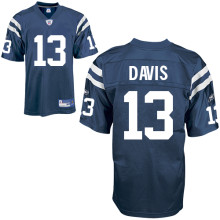