I'm really looking forward to this position battle.  Receiver was a position that a lot of people thought would be the Colts first priority in the draft.  It ended up being the fourth one of the board, but good receivers are still necessary to run the offense to perfection.  That's why I am going to love this battle.  A few guys that were unheralded coming out of college--at least compared to Wayne and Gonzalez--will be battling to step in where one of the greatest players in NFL history left off.  Pierre Garcon, Austin Collie, and Roy Hall will all be battling for the position.  The breakdown is after the jump. 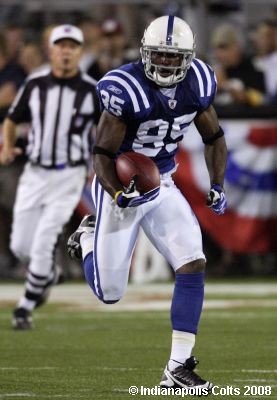 Positives: Adequate size, larger than most small-school prospects. ... Long limbs. ... Accelerates well and is also a strong runner after the catch. ... Blows by defenders at the Division III level. ... Good speed and quickness. ... Used on bubble screens and shallow crossing routes to get the ball in his hands early. ... Also a deep threat, able to adjust to the ball in the air. ... Good hands on punt and kickoff returns. ... Can get upfield quickly and shows a burst to hit the hole hard.

Negatives: Will need to prove he can be mentally and physically strong enough to handle NFL defenses. ... Creating separation may be an issue at the next level. ... Inconsistent effort and success in downfield blocking. ... Not challenged on the line very much, may struggle to beat jam. ... Will dance a bit on returns.

To be honest, I was surprised that Polian was so open about his praise of Garcon.  As a sixth round pick, Garcon did not do much outside of kick returning, something he frankly could not do at the NFL level.  However, Garcon has a lot of potential as a receiver.  He isn't the fastest or the biggest, but he would be a quality Stokley-like slot receiver.  Garcon is the favorite to be the slot receiver right now, but a lot can change with such a close competition.  If Garcon can get on the field consistently, Peyton can make him look good.  There is no doubt about that.  The problem is the fourth round receiver who dominated the Mountain West Conference in college. 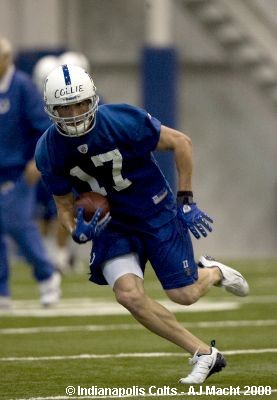 Positives: Legitimate NFL build. Muscled up athlete. Faster on the field than his rather pedestrian 40-yard dash time would indicate. Good initial quickness off the snap. Good hand usage and lateral quickness to gain a quick release against press coverage. Sharp, savvy route-runner. Varies his speeds and can sink his hips to generate separation. Good burst laterally. Works his way back to the ball if he sees his quarterback in trouble. Soft hands. Snatches the ball out of the air and is quick to put it away. Can track over either shoulder. Good elusiveness to make the first defender miss and strength to run through arm tackles. Good vision and will cut it back inside. May lack elite deep speed, but good early acceleration. Averaged 26.5 yards per kick return from 2007-08.

Negatives: Questionable deep speed to challenge over the top. Will be older than most NFL rookies (24) due to his LDS mission. Questionable level of competition. Statistics inflated due to BYU's scheme and defenses keying on TE Dennis Pitta.

Collie is a sharp, precise route runner who knows how to get open. His football speed is a tad faster than his 40 yard time (ran a slow 4.55 at the Combine). He has quick feet and is more athletic than many believe. Excelling at selling fakes, Collie has very good hands. He lacks prototypical size, but doesn't get shoved off his routes; he gets up and grabs anything thrown his way. He has a good demeanor.

Collie lacks explosiveness and initial burst off the line. He will get jammed at the line by physical cornerbacks and he does not achieve separation. Collie tends to run a little upright. He does not like to cross the field and is a suspect blocker, at best. Collie's numbers were inflated by a pass-happy offensive system. Still, the BYU great does have significant upside. He would never be a big play receiver in the NFL, but could find a very good spot as a primary, possession receiver. He is a fifth to sixth round prospect who can pan out in a big way; an intriguing prospect.

Collie was a great pick.  He has all of the skills needed for a slot receiver, and the production at BYU is a great indicator of his skills.  He is a lot like Brandon Stokley with his reliable hands and great route running, and he is destined to be a favorite target of Peyton Manning.  The question is if he will be the slot receiver this year.  Garcon is a favorite of Polian, but he didn't draft Collie for nothing.  Collie has the skillset for the position, but training camp and preseason will be the deciding factor.  Garcon, Hall and Collie all will have a lot to prove.  Right now, I would think Garcon is the favorite, but Collie could easily surpass him before the season opener. 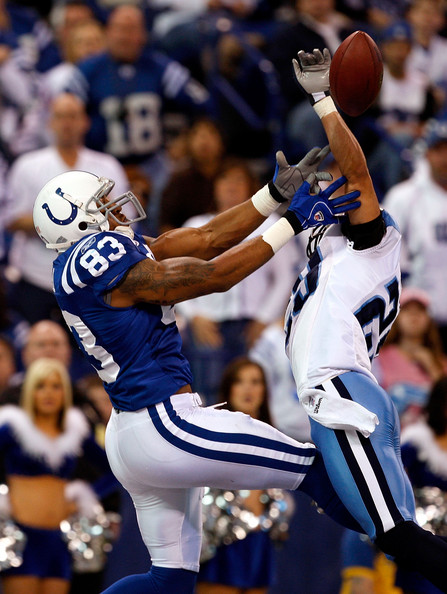 Strengths: Possesses excellent straight-line speed, shows a second gear when tracking the ball downfield and can stretch defenses vertically. Is big enough to shield defenders from the ball, is tall enough to compete for jump balls and has the potential to develop into a productive red zone target. Though inconsistent in this area, generally gets into good position, can sustain blocks and flashes the ability to knock defenders to the ground. Is big enough to line up at H-Back and has some versatility. Gets downfield quickly, has experience covering kicks as well as blocking for kick returns and should make an immediate impact on special teams.

Weaknesses: Takes too long to reach top speed and isn't nearly as effective when slowed down at the line of scrimmage. Doesn't show great burst coming out of cuts, isn't a fluid short-to-intermediate route runner and should have problems separating from man coverage. Isn't explosive, doesn't have the moves to regularly make defenders miss when gets into space and isn't much of a big-play threat after the catch. Appears to take plays off when isn't a primary receiver and effort needs to be more consistent. May not want to line up at H-Back or tight end and could become a distraction if asked to change positions.

Roy Hall is a freak.  He's 6-3, 240 and has ran a 40 in under 4.4 seconds.  However, it doesn't matter when he is never on the field.  He has played in only 7 regular season games in his career.  He separated his shoulder playing special teams as a rookie and had a lingering knee injury last year.  This will be the make-or-break year for his career.  The Colts have enough good young receivers to be at a point where Hall is expendable.  He will need to stay healthy this training camp to make the roster.

I think the Colts are pretty well off at this position.  They have a third year player with freakish athleticism, a second year player that Polian loves and a rookie who is a Stokley-clone battling for a position where they will be going against linebackers and safeties.  With Gonzalez, Wayne and Clark they will rarely face a decent cover man.  I expect whomever gets this job to have a great year.  I think Garcon will get it, but Collie is the future.  They will both see playing time on offense, especially if there is an injury.