The Indianapolis Star has the story up. More than just the end of an era for the Colts, these two men represent the end of an era in coaching. Tom Moore and Howard Mudd gave more than 60 years of combined service to the NFL's coaching ranks. Whether it was in Kansas City, Detroit, or Indy, wherever these men coached, the teams they coached for got better. And while many like to point to the Joe Montana 49ers or the "Greatest Show on Turf" Rams as the best offenses in NFL history, the fact is the greatest offense ever in the history of the NFL was coached by Tom Moore and Howard Mudd right here in Indianapolis.

In that time, the Colts won six division titles, one Super Bowl, appeared in the playoffs ten times, and sent a gaggle of players to the Pro Bowl.

These men are legends in the coaching world. Absolute and complete legends. We will debate the ugliness of several NFL owners opting out of a pension plan that many coaches feel was a two-faced action, but for now we set that aside.

This is about honoring two titans of the NFL coaching ranks. Here's to them enjoying a fishing pond somewhere, a cold beer, and satisfaction that they did their job as well as the best that have ever coached this game. 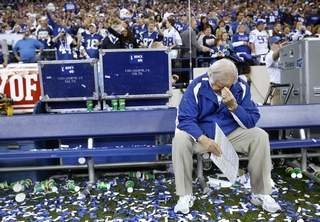 A beautiful picture of Tom Moore following the Colts defeating the Patriots in the 2006 AFC Championship Game.